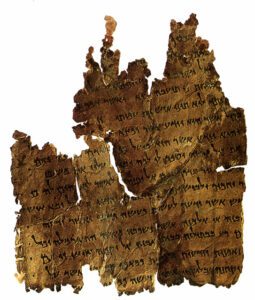 A study recently published in Proceedings of the National Academy of Sciences suggests the Hebrew Bible is older than most have previously believed.  The study was performed at the Tel Aviv University in Israel who analyzed multi-spectral images of sixteen ancient Hebrew inscriptions.

The letters are written in ink of broken pottery shards (ostraca) using a proprietary software program specially designed for this purpose.  The ostraca itself dates back to 600 BC and was originally found at the Judahite fortress of Arad in southern Israel.

Hand Writing to Determine the Age of the Old Testament

The authors of the study were able to discern at least six different handwriting styles on the ostraca concerning the movement of troops and food expenses.

The results indicate that in this remove fort, literacy had spread throghout the military hierarchy, down to the quartermaster and probably even below that rank.

Now our job is to extrapolate from Arad to a broader area.  Adding what we know about Arad to other forts and administrate localities across ancient Judah we can estimate that many people could read and write during the last phase of the First Temple period.  We assume that in a kingdom of some 100,000 people, at least several hundred were literate.

Scholars have debated whether the Old Testament was written after the Babylonians destroyed Jerusalem or much earlier.  However, since literacy was apparently more widespread in ancient Israel than previously thought, the ancient Hebrew texts could have been written earlier than originally proposed.

already by 800 BCE there was sufficient intellectual infrastructure, that is, well-trained scribes, able to produce sophisticated historical and literary texts.

The recent discovery of even more ancient Hebrew writing dating back to the 10th century BC places it within the reign of King David.  This would support the opinion that Scripture was written centuries earlier than previously thought. 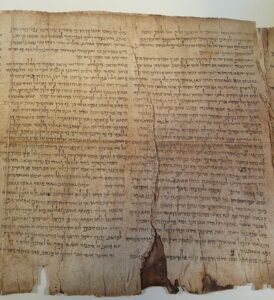 The Great Isaiah Scroll – By Jb344tul – Own work by the original uploader, CC0, Link

The oldest parts of the Bible were likely written down in an early form of Hebrew (“proto-Hebrew”) that would be difficult although not impossible for modern Hebrew readers to interpret.

Gershon Galil is a professor of Biblical Studies at the University of Haifa in Israel noted,

It [the inscription] indicates that the Kingdom of Israel already existed in the 10th century BCD and that at least some of the biblical texts were written hundreds of years before the dates presented in current research.

The writing was discovered on a pottery shard during excavations at Khirbet Qeiyafa near modern Israel’s Elah valley.  These excavations were carried out by archaeologist Yosef Garfinkel of the Hebrew University of Jerusalem.  The inscription was difficult to interpret at first but Galil was finally able to interpret the text.  He noes,

It uses verbs that were characteristic of Hebrew … which were rarely used in other regional languages.  Particular words that appear in the text … are specific to Hebrew and are written differently in other local languages.

The text is written in ink on a shard of pottery about 6 inches by 6.5 inches and appears to be a social statement about how slaves, widows, and orphans should be treated.  It translates to,

The context is similar to Biblical scriptures.

The importance of his article can hardly be overstated.  Many modern scholars believe Jews in the second or third century BC were authors of the Old Testament.  Secular scholars argue this dating due to the prophetic nature of much of the Old Testament material – being secular, accurate prophecies can not have been written before the prophetic events.  This particularly concerns the major prophets Daniel, Ezekiel and Isaiah.

However, most modern evangelical Christians would agree the Old Testament was almost certainly written prior to the Babylonian destruction in 586 BC.

While we have the Isaiah Scroll found with the Dead Sea Scrolls that have that carbon-dated to about 300 BC, we do not have ancient Daniel or Ezekiel scrolls.

Secular scholars, in particular, have doubted the portions of Daniel which predict in great detail the Greek rulers over second BC Israel could have been written prior to the events.  These new studies coming out of Biblical archaeology give scientific credence to the ancient origins of prophetic scripture.  The writing was not restricted only to the scribe class but was more common throughout society.

The recently discovered Moabite stone altar attests to the historicity of an ancient Jewish conflict between Israel and the Biblical Kingdom of Moab. The Kingdom of Moab Moab was a country near ancient Israel founded by the descendants of Lot, the nephew of Abraham.  The Bible notes this country was… Read More »

The “Lost” Gospels
The Gospel Authors

Leave A Response to "Age of Old Testament" Cancel reply