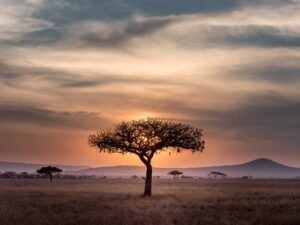 Africa is the birthplace of humans.

The prevailing scientific narrative regarding human evolution is that humans originated from the great apes and that this evidence is clear.  The 150 years since Darwin speculated that human originated from the monkeys as seen the number of proposed human ancestors explode in number.  There is little agreement in the scientific community concerning the origins of the human lineage (“hominins”) due to the large number of putative ancestors.

The prestigious peer-reviewed journal Science has taken a look at this controversy.  Paleoanthropologists have attempted to reconstruct the physical characteristics of human ancestors, where this ancestor originated, and how humans spread throughout the world.  They are also evaluating the characteristics of the last common ancestor of humans and chimps.  The results of this reconstruction have provided more confusion than clarity.  The fossil evidence mostly provides confusion rather than clarity and consensus among scientists.

Few discoveries have captured the popular imagination as Lucy.  Her fossilized remains were found in an ancient sediment in Ethiopia.  Paleoanthropologist Donald Johanson found the discovery noting

As I looked up he slopes to my left I saw bits of the skull, a chunk of jaw, a couple of vertebrae.

He notes it was immediately obvious this was a momentous discovery as the sediments were known to be 3.2 million years old.  At the time of its discovery, it was purported to be the oldest early human – or hominin – ever found.  Further exploration was able to uncover about 40 percent of her skeleton.

Tim White from the University of California, Berkeley noted her as our oldest direct ancestor,

We knew we were genetically incredibly close to chimpanzees, with the last common ancestor we shared with them estimated to be around six million years ago, Lucy had closed a gap in our knowledge.

Melissa Hogenboom notes there were complications to this narrative that may unseat Lucy as our ancestor.  She nots that our lineage had become “very complicated.”  When Lucy was found, there were about seven early hominins known; now there are at least twenty.  She admits we just do not know which ones eventually led to humans (for certainly humans must be descendants of ape-species), and which species represent dead ends.

Furthermore, while some species may have been our ancestors according to this narrative, there were many that were not.  As Hogenboom notes,

There was a lot of variation and experimentation along the way, with many species being driven to extinction – most famously the Neanderthals.  Johanson says modern humans, for all our abilities, may have been fortunate to have survived it all.

The human evolutionary narrative involving Lucy illustrates the confusion among paleontologists regarding which ape species were direct ancestors of humans.  The whole ape-ancestry problem seems to be that of a conclusion looking for a solution.  Anthropologists know that somehow humans arose from the great apes and ape-like creatures which seem to have inhabited Africa for several millions years.

The problem is – which ones?  The skeletons are usually very fragmentary with a whole skeleton derived from only a few remnant bones.

These approaches have produced a conflicting hodgepodge of incompatible and contradictory explanations for human origins.  They simply cannot all be true, and the very nature nature of trying to evaluate fragmentary fossils of long-extinct apes makes finding the truth difficult at best.

The problem is not really due to a shortage of fossils.  As the Science article notes,

many of these fossils show … combinations of features that do not match expectations for ancient representatives of the modern ape and human lineages.

The fossils found are so different from each other that they cannot all be ancestors of modern primates let along humans.  The Science article notes,

In The Descent of Man in 1871, Darwin speculated that humans originated in Africa from an ancestor different from any living species.  However, he remained cautious given the scarcity of fossils at the time.  One hundred fifty years later, possible hominins – approaching the time of the human – chimpanzee divergence – have been found in eastern and central Africa, and some claim even in Europe.  In addition, more than 50 fossil ape genera are not documented across Africa and Eurasia.  However, many of these fossils show mosaic, combinations of features that do not match expectations for ancient representatives of the modern ape and human lineages.  As a consequence, there is n o scientific consensus on the evolutionary role played by these fossil apes.

Additionally, the researchers in this Science article note that the narratives of human origins are not compatible with the known fossil record.

Living ape species are specialized species, relicts of a much larger group of now extinct apes.  When we consider all evidence – that is, both living and fossil apes and hominins – it is clear that a human evolutionary story based on the few ape species currently alive is missing much of the bigger picture.

Fossil Apes are a Big Mess

When you look at the narrative for hominin origins, it’s just a big mess – there’s no consensus whatsoever.  People are working under completely different paradigms and that’s something that I don’t see happening in other fields of science.

The problem is that the fossils are so different and unique from each other that they cannot all be ancestors of modern primates, much less humans.  The whole evolutionary structure from early apes to modern humans is a construct based on very little convincing evidence.

Paleoanthropology is a scientific field where much of the narrative is built on scarce evidence resulting in different narratives to explain human evolution that are confusing and contradictory.  It is not like chemistry and physics where scientific dogma can be substantiated in any suitable laboratory throughout the world.  The best paleoanthropology can offer is a “best” explanation for the confusing amalgam of the poorly defined fossil evidence.

The Darwinian evidence surrounding the origins of man simply does not warrant the same level of confidence as would a physics law or a chemistry finding.  Human evolution is just a “mess” with little confidence the mess will be cleaned up any time soon.

The complexity of the African ape’s origins cannot be over-emphasized.  Many early ape species lived and changed entirely independently from other species while other lines intermingled.  Trying to tease out this complexity has proven very difficult at best and likely will be impossible.

This means that the assertion that humans arose from ancient ape species which may not even be alive today becomes impossible to prove and will likely remain speculative.  The Science authors note these difficulties in their article abstract,

Modern hominoids (that is, humans and apes) share multiple features (for example, an orthograde body plan facilitating upright positional behaviors). However, the fossil record indicates that living hominoids constitute narrow representatives of an ancient radiation of more widely distributed, diverse species, none of which exhibit the entire suite of locomotor adaptations present in the extant relatives. Hence, some modern ape similarities might have evolved in parallel in response to similar selection pressures. Current evidence suggests that hominins originated in Africa from Miocene ape ancestors unlike any living species.

This year marks the 150th year anniversary of Darwin’s book The Descent of Man, and Selection in Relation to Sex.”  He proposed the narrative that man – just like every other life form on earth – originated from an earlier life form through the process of evolution. Darwin noted,

whether man, like every other species, is descended from some pre-existing form.

Of course, Darwin came to the conclusion that that yes, man is descended from apes which themselves originated from earlier ape species in a lineage tracing back to the earliest life forms that crawled out of an ancient sea.

In 1871 at the time this work was published, genetics was still in its infancy and there was little fossil evidence to prove or disprove his assertion.

Darwin’s conclusion was mostly speculation based on little evidence but it just seems like it had to be true.  Unfortunately, over the next 150 years and countless fossils extracted from the earth, there remains little hard evidence to substantiate Darwin’s views.

As the leaders of the Science article sum everything up – it is all a “mess” just like trying to find how life started on earth through natural methods.

This is important as modern science sometimes gives the impression that mankind’s evolutionary history is clearly defined in the fossil records, that the “missing link” has been identified, and that genetics demonstrates clear evidence of our ancestral history.

This simply is not true as the science is anything but clear.

It is very likely that life will be discovered on some other solar system body even though a naturalistic origin of life seems to be quite impossible. Life on earth has been very abundant on Earth for about 3.8 billion years.  We have some form of life everywhere; down to… Read More »

Christianity and Education
Near Death Experience