One of the most common colloquialisms is about hardening your heart.  According to Merriam-Webster, it means to

stop having kind or friendly feelings for someone or caring about something.

It would probably surprise most people that the expression derived from ancient Egypt and is important in the Biblical narrative. 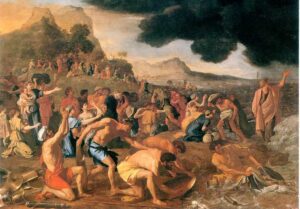 Ancient Egypt was a place of customs that seem very strange to us today.  Many of these ancient customs are related to religious rituals the Egyptians followed concerning the afterlife.

The Weight of the Heart ceremony was a procedure that the Egyptians believed occurred after death when you arrived at the underworld.  This ceremony would determine your fate in the next life.  The dead would have deeds test to determine whether you had led a truthful, meritorious life or whether you failed in those regards.  Associated spells were found in the Book of the Dead,

The negative confessions were also known as The Declaration of Innocence) and consisted of 42 sins which the soul of the departed must be able to say they have never committed when they step foot into the afterlife.  The Book of the Dead was to help the departed in this journey. The ancient Egyptians were apparently very practical and believed you could not get to a particular destination if you did have specific directions.  The Egyptians believed that the soul was eternal and that one’s life on earth was but a small portion of the eternal journal.

It was considered important that the departed have some guidance on their journey in the afterlife.  The poor would have to wing it on their own as best they could, but anybody of substance would pay for a scribe to create a personalized guidebook for them to use.

The soul would be led from its place of death by Anubis and stand in judgment before Osiris, Thoth, and the 42 Judges.  Each of these judges would be responsible for querying the departed upon a particular sin.  You would be expected to hand over your heart to be weighed in the balances against a feather.  This feather represented truth, order, and justice.

During the examination process, the departed would recite a list of 42 sins they did not commit.  Although the number of these sins remained consistent, the actual sins were not.  The ancient Egyptians believed that if the heart was “heavy” with sins, it would testify against them.  That is why the heart was left in the body during the mummification process as it would be needed in the afterlife to testify (hopefully) to their good behavior during life.

The consequence for failing this test would be that their heart would be consumed by the demon Ammit, who was a creature part lion, crocodile, and hippopotamus.  At this point, either the soul of the departed would cease to exist or the soul would be restless forever.

This is where the expression concerning “hardening of the heart” came from.  The Egyptians believed the heard contained your personality, character, and intellect and was rather like a tape-recorder containing the story of your life. 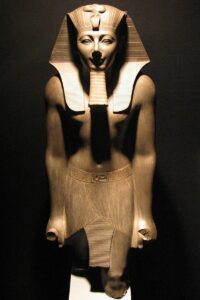 Pharaoh had a problem.  The Hebrew people they enslaved many years ago continued to multiply to such an extent that they endangered the Egyptian population.  He knew from prior experience that slaves within the country could rise up against their masters and threaten the status quo.

That must not be allowed to happen.

Then there was this elderly eccentric Jewish man who was once a part of the Egyptian household but who fled Egypt due to a murder he committed years ago.  This man had tried to hide the murder but it had been witnessed, and the word of this treachery spread throughout Egypt.  This man was familiar with Egyptian ways and spoke the language fluently because he had been taught in the best schools by the best teachers.

But he repaid Egypt with murder. And now, this same man, this same ungrateful Hebrew wanted the Pharaoh to let them go out into the desert and worship their God.

Of course, the Pharaoh refused – who wouldn’t!  Scripture reports that this Pharaoh, ruler of Egypt, made his “heart heavy” when he rejected the message Moses was bringing.  He did this even in the face of progressive punishments of the plagues that devastated his country,

Pharaoh hardened his heart (literally, “Made his heart heavy”) this time also, and he did not let the people go.  (Exodus 8:32)

We do not have any report as to the ultimate fate of this Pharaoh, whether this hardened heart was found wanting when weighed against a feather in the afterlife.  All we do know is that things did not turn out well for him. 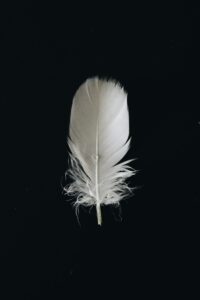 Ancient Egyptians believed their heart would be weighed against a feather.

After his first-born son was killed at the time of the first Passover, he finally relented and let Moses’ people free.  However, when he recovered somewhat from his grief and realized what he had done, he decided to bring them back, murder a few, and make their servitude harder than ever before.  He would teach them a lesson!

He got his army together and with hundreds of chariots and skilled warriors went after the unarmed slaves trying to escape their master.  Pharaoh became elated when he was told these hapless slaves were trapped with nowhere to go, hemmed in by the waters of the Red Sea.  There was no way for them to escape.

Then there was this strange pillar of fire stopping them from capturing these Hebrews.  Then Moses used his trickery to open up the Red Sea and the people passed through the sea on dry ground, with the waters held back on either side of their passage!  Finally, the firey cloud disappeared and Pharaoh thought he finally would have his revenge.  He charged full speed hoping to quickly catch up to these hapless slaves only to have the vast part of his army – the best in the world – killed by drowning.

The beleaguered Pharaoh limped back to his palace totally defeated, never to launch another military campaign as his whole army was decimated.

This retelling of the Exodus recalls the curious phrase “hardening of the heart” and a “heavy heart.”  Our modern society still uses this expression with its origins 3500 years ago at the time of Moses.

Hardening of the heart was synonymous with having a heavy heart which could cause your total destruction in the afterlife.  It was to be avoided at all times.  This would encourage the Pharaohs to be fair with their citizens and rule with honor and dignity.

This is another example of a minor detail in Scripture that helps to verify its authenticity.  A Hebrew scribe writing a thousand years later would have no concept of “hardening of the heart” and how it was something to be avoided by Egyptian rulers at the cost of their soul.  These small details add to the aura of authenticity of Scriptures – particularly something written so long ago.

Kennedy, Titus, *Unearthing the Bible: 101 Archaeological Discoveries that Bring the Bible to Life”, 2020

Ancient Secular References to Jesus
Atheism and the Meaning of Life

Leave A Response to "Hardening Your Heart" Cancel reply