The Hertzsprung-Russell diagram is foundational to an understanding of stars and virtually everything astronomers have learned about stars, galaxies, and the universe.  The diagram plots the absolute magnitude of a star against its spectrum. Thus, to put any star on the diagram, we only need to know its surface temperature (which relates to its spectral type) and the absolute brightness.

Astronomers can determine the spectral type for visible stars if the telescope can gather enough light.  The amount of light collected from a star can be increased with a larger telescope, longer collections time, or more sensitive equipment. In addition, astronomers can determine the absolute magnitude of a star if we know the parallax of the star (which can be difficult to measure) and its apparent brightness. 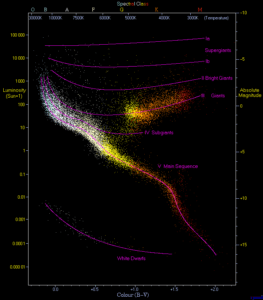 The main sequence on the HR diagram is where most stars can be located. The band of stars goes from the faint red stars on the lower right to the brilliant blue stars on the upper left.  All the main sequence stars are called “dwarf” stars even though they come in many different sizes.

In the upper right of the diagram reside the red-giant stars, which are enormously big but with low surface temperatures.  The lower left part of the diagram shows a sparser collection of faint blue-white stars, the “white dwarf” stars.

We know the red giant stars in the upper right portion of the HR diagram are “giants,” huge stars with low surface temperatures but enormous sizes radiating lots of light.

Stars in the main sequence are referred to a “dwarfs” by convention.  How small can a star be and still be considered a star?

The refractor was the main telescope design used in the 19th century.  This used the same design as a modern camera or binoculars to look through a lens.  The lenses used at that time were very difficult to make well and often required multiple attempts to make a perfect glass lens without any bubbles or imperfections.  Of course, these imperfections would adversely affect the quality of the image produced.

The lens type of telescope was that the glass would sag or change conformation when it was pointed in different directions.  This was due to the weight of the glass and was largely unavoidable. As a result, larger and larger lenses were being made, but they soon reached their maximum practical size. 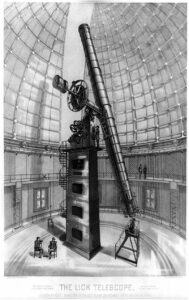 By W. J. Morgan & Co. – This image is available from the United StatesLibrary of Congress;’s Prints and Photographs division under the digital ID cph.3a13718. Link

The reflector is the type of telescope that is currently design type used in modern large telescopes where a mirror is used instead of a lensing system.  This is because the massive weight of the reflecting mirrors can be supported individually using computer guidance to produce a perfectly focused beam of light.  Large refractor telescopes are mostly now relics of the past.

Alvin Clark was busy testing the lens of the 36 inch Lick refractor seen on the right drawing.  The Lick observatory telescope was the largest in the world at the time of its completion in 1887.

Clark had made an 18.5-inch lens for the University of Mississippi in 1862.  He was testing the optics on the brightest star in the sky, Sirius.  During these observations, he discovered a faint companion star that had never been seen before.  Friedrich Bessel had proposed a “dark companion” of Sirius based on this faint wobble several decades earlier but sadly did not live to see that he was correct in his predictions.

Sirius and Its Companion Star

Under ideal observational conditions, Sirius can just be glimpsed during the daytime.  Its brightness is in contrast with its companion star which is much dimmer.  The question became, why is it dimmer?

These conclusions all arise from an understanding that the spectral types of various stars are determined by the surface temperature of the star, and according to the HR diagram, the spectral type of a star determines its absolute brightness.

What astronomers next needed to determine the cause of these relationships.

The Hertzsprung-Russell diagram represents an amazing discovery.  Stars are so distant that even the closest star is (at least now) too far away for direct exploration.  It takes light from that star years to travel the immense distance to Earth.

Even though stars are so far away, we can learn much about them just by observation of their simple characteristics.  The spectrum of a star carries a tremendous amount of information as the star’s internal structure and composition determine its spectral type.  Just by knowing its spectral type, we know how the star’s surface temperature and absolute brightness.  Astronomers can then determine the size of a star through applications of the Stefan-Boltzman equation – truly a remarkable achievement.

The next puzzle was why all of this happens!

One of the greatest discoveries in the last century was the mechanism of the creation of the universe in the big bang. Cosmologists have established the most likely model for this creation was at a point in time about 13.8 billion years ago. At this point in time – just… Read More »

The existence of the Big Bang has been confirmed through multiple independent mechanisms to have occurred about 13.78 billion years ago.  We can even measure the left-over temperature from the Big Bang in empty space. Two of the greatest discoveries made in cosmology during the twentieth century were that the… Read More »

Leave A Response to "The Hertzsprung-Russell (HR) Diagram" Cancel reply