The Jerusalem Chronicle is one of a series of a history written concerning the fir eleven years of the reign of Nebuchadnezzar II.

The chronicle concerns the period between 605 and 594 BC including his military campaigns against various other countries including Judah, Egypt, and Assyria.  The table is currently housed in the British Museum in London, and measures 3.25 inches by 2.4 inches long.  Even though it was acquired in the antiquities market and its original place of origin is unknown, it has been verified as being genuine. 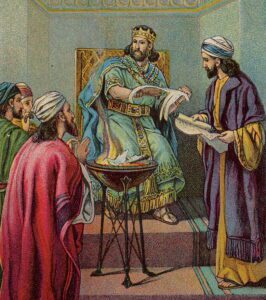 The document is important as it verifies the history of the Biblical account and in doing so, helps to establish the historicity of the rest of the Scripture.  It reports the battle between Babylon and the Egyptian army in Carchemish.  The two armies met near the Euphrates River in what is now the border frontier between Turkey and Syria.  While today this is a very dangerous region with constant fighting between Turkey and Syria, it was the scene of a terrible ancient battle.

The battle was at Carchemish which is now an extensive set of ruins.  The location of Carchemish was established in 1876 by George Smith from Britain.  The site was then excavated by the British Museum between 1878 and 1881, and then between 1911 and 1914.  The whole site was mined by the Turkish Army and then mines cleared ten years later.  The site has limited visiting hours with tour guides

Jerusalem had made the mistake of aligning themselves with Egypt and hoping for their protection against Babylon.  This was a strategic error because Egypt was decisively defeated by Babylon at Carchemish, leaving Jerusalem vulnerable to the angry reprisal of Babylon.  It also angered God because Judah was expected to rely upon God for protection and not to another nation’s army.

The Battle of Carchemish occurred during the summer of 605 BC between the Babylonian army of Nebuchadnezzar II and Pharaoh Necho’s army from Egypt, along with remnants of the Assyrian army who fought with Egypt.  The Egyptians were defeated decisively by the Babylonians and driven out of the area; the Egyptians never really recovered from this decisive defeat.

After Josiah’s death, he was succeeded by Shallum, one of his sons (also known as Jehoahaz, who reigned for only a few months.  He was forcibly taken off the throne by Necho and taken to Egypt where he died.  He was replaced by Johoiakim who ruled as a vassal of Egypt, paying a heavy tribute to them.    When the Egyptians were defeated by the Babylonians in the Battle of Carchemish, Nebuchadnezzar besieged Jerusalem and Jehoiakim changed sides to avoid the destruction of Jerusalem.  Jehoiakim then paid tribute to the Babylonians, even handing over some of the royal family as hostages.  Daniel is described as being one of these handed over as a teenager in 605 BC.  (The year 605 BC is considered the beginning of the Babylonian captivity of Israel which continued for another 70 years.) 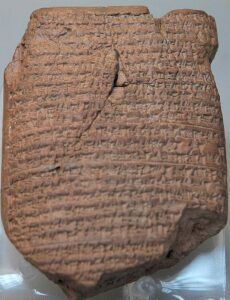 This continued until another war broke out between the Babylonians and the Egyptians in 601 BC which undermined Babylonian control of the area.  Jehoiakim then switched alliance back to the Egyptians – a fatal mistake.

The Babylonian king then invaded Judah and again laid siege once again to Jerusalem lasting about three months.  Jehoiakim died before the siege ended; because he was such an evil person hated by the people of Jerusalem, he was not buried with the kings of Israel – common custom.  Instead, his body was unceremoniously dumped at the wall of Jerusalem without any burial.

The evil king Jehoiakim was then succeeded by his son Jehoiakin.  However, Nebuchadnezzar deposed him fearing he would seek revenge for his father’s death, and instead put Zedekiah – a brother of Jehoiakim – in place as king.

The Jerusalem Chronicle and the Babylonian Conquest

The Jerusalem Chronicle details much of the same information given in Scripture.  The Chronicle opens by noting that Nebuchadnezzar

The Jerusalem Chronicle also gives the history of the Babylonian attack against Jerusalem in 597 BC when Zedekiah was appointed King.  The Biblical books of Kings, Chronicles, and Jeremiah also talk about the 597 siege of Jerusalem, the capture of Hejoiahin, and the appointment of Zedekiah.

At that time the servants of Nebuchadnezzar king of Babylon went up to Jerusalem … So he led Jehoiachin away into exile to Babylon … Then the kind of Babylon made his bundle Mattaniah king in his place and changed his name to Zedekiah. (2 Kings 24:10, 15, 17).

The Jerusalem Chronicle is another in a long series of archaeological findings within the past few years that have confirmed the Biblical historical narrative.

The Chronicle and Scripture agree to a remarkable degree in their description of events which occurred 2600 years ago, long lost to historical memory and only unearthed recently.

The Egyptians, Babylonians, Assyrians, and Hittites were constantly at war in and around the Israelite nations, often sniping at their border, exacting tribute, and being a general menace.  Eventually, the Babylonians captured Judah, destroyed Jerusalem and its Temple, and carried the survivors into 70-year captivity.  This history is also substantiated by ancient documents.

One of the most remarkable findings has been the unearthing of a huge Hittite civilization which was thought to be mythical only 150 years ago.  The Hittites occupied a vast empire including most of modern-day Turkey and were at intermittent war with the Egyptians.  The Hittites are now well recognized as an ancient Empire rivalling Egypt in its splendor and importance.

The Biblical history seems accurate – likely, the rest of Scripture is as well.

The French Revolution
The Hittites