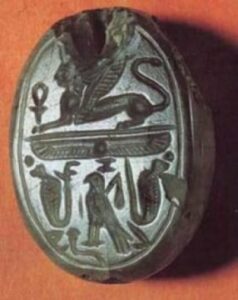 Jezebel is the quintessential evil queen in the Old Testament and even today is emblematic of a sinful woman.

Jezebel was the daughter of Ethbaal, an ancient king of the Phoenicians (1 Kings 16/31). The ancient Jewish historian Josephus notes Ethbaal was a priest of Ashtoreth and usurped the throne and ruled over Tyre and Sidon in current day Lebanon for 32 years.  She is also identified as the great-aunt of Dido, the first Queen of Carthage.  Dido is most famous for the account given by the Roman poet Virgil in his epic poem Aeneid.  In this poem, Dido falls in love with the Trojan hero Aeneas only to be left by him.  Virgil also casts Aeneas as the ancestor of Romulus and Remus – the founders of Rome.

What was the Jezebel Seal?

Seals were used in the ancient Middle East to identify communications and official correspondence.  Some molten wax was placed on the letter, and the seal was then used to provide an image within the wax. This would serve to authenticate the letter’s origin as well as provide some security to the correspondence.  The Jezebel seal was found in 1964 by Utrecht University Old Testament scholar Marjo Korpel.

Some experts felt the seal might have belonged to another woman of the same name. However, Korpel noted the seal bears symbols identifying the owner as being royalty.

The seal is now included in the Israel Antiquities Authority Collection in the Israel Museum in Jerusalem which vouches for the authenticity of the relic.

Jezebel is arguably the evilest character in the Bible – other than Satan. She was married to King Ahab in the Old Testament and led Ahab and the entire nation away from God toward the worship of ancient Phoenician gods including Baal.

The marriage between Jezebel and Ahab was likely a political marriage arranged between the northern kingdom of Israel and the king of the Phoenicians. Jezebel brought foreign gods and goddesses into Israel; as soon as the new queen is introduced, Ahab builds a sanctuary for Baal in the very center of northern Israel within its capital city of Samaria. In contrast to the familiar gods of Phronesis that Jezebel is accustomed to petitioning, she is now exposed to a state religion featuring a long masculine deity. She seems driven to eliminate Israel’s faithful service to Yahweh while she remains loyal to her religious roots determined to maintain her cultural identity in a foreign land.

Baal worship extended throughout the ancient world and was called by different names in different civilization. Baal becomes Jupiter of the Romans, Zeus of the Greeks, Mazda of the Persians and Amon of the Egyptians.

People were taught that Baal was responsible for droughts, plagues, earthquakes, and other natural disasters. In times of great disasters, human sacrifices, particularly of children, were made to appease Baal.

The sacrifice of children was brought into the common experience of the northern ten tribes of Israel by Jezebel. The Baal priests would like fires in the base of a brass effigy of Baal and the children were placed on the burning hot outstretched hands of the statue. As they were burned alive, they would scream out; priests would beat a drum, sound flutes, lyres, and tambourines in order to drown out these screams. This was to prevent the child’s parents from hearing the voice of their dying son so they would not be troubled by what they had just done.

The child’s remains would be collected and placed in special small urns which were then buried in a funerary. These urns have been recovered during recent excavations proving the prevalent nature of this practice.

The ritual of burning child sacrifice was called “the act of laughing” as when the flames are consuming the body, the limbs contract and the open mouth seems almost to be laughing. The euphemism of causing a child to “pass through the fire” was used in the ancient to describe this practice. Generally, these sacrifices were performed on “high points” throughout the city. These “high places” became the most horrendous areas of child sacrifice and are frequently mentioned throughout the Old Testament as an enduring legacy of the Phoenician Queen Jezebel.

While many have thought Jezebel just to be a legend, her existence is now substantiated by finding her royal stamp.  Biblical history has been substantiated through the finding of stamps from several other Biblical characters as well, all in their historical context.  These show these Biblical figures are not merely fiction but actual important people in the ancient history of Israel.

Summary of the Jezebel Seal

Jezebel is a particularly loathsome character portrayed in the Old Testament as responsible for leading Israel away from God.  She ended up being brutally killed and eaten up by dogs leaving only a few remains for a proper burial.

She has also been considered by liberal theologians and the popular media as being a fictional character, made up by well-meaning but misleading Jewish scribes to give a good story.  Everybody likes an evil ruler who is put in their place.

The important message is that once again, Biblical historicity is established with the identity of one of the main players confirmed with real historical presence.