There is Not a Chance the universe could have been created without an intelligent designer.  The more we have learned about the universe and about physics in general, the more we have come to understand the complexity of science.  But even more importantly, we have also come to understand how the physical constants of nature are required to be the values they are in a very precise manner, even though they do not have to be that value at all.

The journal Science is one of the most prestigious journals in the world today often publishing only landmark articles with significant implications for a field of science.  In 1998, the journal described the cosmological constant as the “breakthrough of the year;’ it possibly ranks as the greatest breakthroughs of the last century due to its implications.

In order to gain some insight into the meaning and importance of these recent discoveries, it is important to get a little background into exactly what is this thing called the “cosmological constant.”

Not a Chance for the Cosmological Constant

The scientific community recognized this implication – and so did Einstein.  He decided that it must no be correct and introduced a “fudge factor” called the cosmological constant which would perfectly cancel the effects of gravity and produce a static universe.  Einstein would later call this his greatest scientific blunder.

Nearly a century later the scientific community has resurrected the concept of a cosmological constant but its form is very different than that proposed by Einstein.

The mysterious substance that permeates throughout the universe and that is much more common than ordinary matter is called “dark energy.”  It is this substance that is purported to be responsible for the cosmological constant.

It turns out that when the universe was much younger and more compact, the effect of gravity was much greater in producing its braking effect.  As time goes on, however, the repulsive effect of dark energy wins out and the universe expands.

So how exactly do we know the universe is expanding more?

A supernova is the catastrophic explosion of a large star that occurs at the end of its life when it effectively exhausts all its nuclear fuel.   The explosion of a supernova can be so dramatic that the resulting explosion can outside an entire galaxy of stars.  A supernova will not become a supernova unless its mas sis larger than about 1.4 times our Sun’s mass.

A type 1a supernova occurs in a binary star system with one large star and one white dwarf.  A white dwarf is a burnt-out star whose mass is just under 1.4 times our sun’s mass.  This means that our own Sun will one day in the very distant future become a white dwarf star.  White dwarfs are fairly common throughout our stellar neighborhood; the brightest star 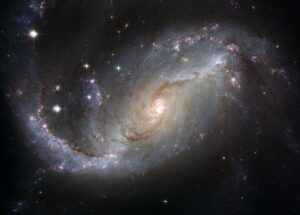 in the northern sky is Sirius which has a dim white dwarf star nearby.  The white dwarf is a bit of a thief as it pulls gas from its larger neighbor and gradually increases in mass.  When the white dwarf reaches 1.4 solar masses it explodes as a supernova.

The important thing is that because a white dwarf explodes when its mass is 1.4 times that of our sun, they all explode with roughly the same luminosity.  Since we know the luminosity of this type of supernova, we can then tell how far awake it is.

Because a supernova is very bright, it can be seen at great distances; sometimes these will be seen in galaxies that are billions of light years away.

Astronomers have been surveying the sky looking for this type of supernovae from various distances from the earth; after measuring dozens of these stars, it is possible to determine the universe’s expansion rate at different ages.

Adam Riess and a team of 20 astronomers were able to use this technique after finding 50 supernova stars.  Their data was soon supplemented by another team of astronomers who located 42 additional supernovae.   They demonstrated that dark matter exists and that the accelerating expansion of the universe is a real phenomenon.

There are now about 740 supernovae cataloged with their absolute brightness and distances determined.  There is now thought to be a 99.996% probability that the cosmic expansion rate is accelerating.

Other Confirmation of Universe Expansion Acceleration

In addition to Type 1a supernovae, there are other confirmations of the accelerating nature of the expansion of the universe.  This includes galaxy clusters, gravitational lenses, baryon acoustic oscillations, gamma-ray burst events, all yielding data concerning the cosmic expansion at different rates of dates and are independent of supernovae evaluation.

The Hubble Space Telescope is being used to evaluate supernovae from just 2.5 billion years after the Big Bang in two big surveys.  These include the CLASH survey (Cluster Lensing and Supernova Survey with Hubble), and the CANDELS survey (Cosmic Assembly Near-Infrared Deep Extragalactic Legacy Survey).  It is hoped these surveys will add additional confirmation to the ever-accelerating expansion of the universe.

The importance of these observations is that they support a Big Bang universe model (along with their theological implications).  But there is more support for there being a beginning of the Universe.

Not a Chance for a Flat Universe

We now understand the universe is not precisely “flat.”  The “flatness” of the Universe does not mean it is in some way two-dimensional; what it does mean is that as space expands it does so without bending on itself.

The universe must have a flatness parameter called “Ω-k” and the cosmic density parameter Ω-density has to equal exactly 1.0.

There are only four factors that can contribute to the density of the universe:

Evaluation of these parameters enables cosmologists to calculate the dark energy density or the cosmological constant.  We can see indirectly the consequences of dark energy in that the Universe’s expansion rate is accelerating but with this new approach, it is possible to actually calculate how big it is.

Flatness Parameter.  Evaluation of the flatness of the universe has been possible with the Wilkinson Microwave Anisotropy Probe (WMAP) and Planck maps of the cosmic background radiation.  These spacecraft determined that the cosmic spatial curvature is flat – or very nearly flat.

Relativistic Particle Density:  Calculations of this parameter are based on WMAP data and yield a value of 8.52 X 10-5 – again essentially negligible.

Cosmic Mass Density.  Determination of the cosmic mass density has now been determined by multiple teams based on observational values using galaxy clusters, galaxies, voids between galaxies, supernovae, galaxy clusters, etc.  whereby it has been possible to effectively map the entire universe; these values average 0.2934 +- 0.0107.

Not a Chance Major Presumption

The major presumption of these calculations is that general relativity as described by Einstein nearly a century ago is a real thing; that it – and properties derived from it – actually describe our Universe.

This turns out to be a valid presumption in that observational data proving relativity shows it can predict movements of massive bodies to greater than ten-trillionth of a percent.  This is far more precise than anything that can be achieved on earth.

For many decades, atheists have fought against the concept of dark matter because it implies an origin of the universe in a point of time.  Furthermore, the beginning of the universe is so recent in time that it does not give sufficient time for the origin of life and the history of life.

Dark energy also finds disfavor with atheists because of the accuracy in fine-tuning it implies.  Dark energy implies the universe had a beginning in time just like the Bible says it does.  The extreme fine-tuning of the cosmological constant to enable an accelerating expansion of the universe implies an extraordinary intelligence to set this whole thing up.

The fine-tuning is the need for the Universe to expand at just the right rates throughout the lifetime of its existence for life to exist.  Not only would life not exist without this extreme fine-tuning – there would be no matter, no elements, and therefore no chemistry.  Furthermore, it must be exquisitely fine-tuned in order to get the correct amount of hydrogen and helium at the start of the Universe – too little or too much helium would mean future stars would not produce the elements life requires.

The fine-tuning of the universe has to be at one part in 10^123 power, which is about 10^99 times the fine-tuning that can be achieved by humans today.

Not a Chance Summary

The importance of the cosmic background radiation (CBR) and fine-tuning of the cosmological constant cannot be overstated.  The CBR gives a visual representation of the state of the universe only a few hundred thousand years after its creation and has allowed cosmologists to infer a tremendous amount of data concerning the early universe and its characteristics.

Perhaps the most amazing of these characteristics is the understanding that the universe is expanding at an accelerating rate and that it had a beginning; this beginning marked the start of time itself in addition to the ex nihilo creation of all matter and energy.  There was nothing before the Big Bang because this creation event marks the start of everything.

Leave A Response to "Not A Chance" Cancel reply