Pontius Pilate of Biblical fame is thought to have built a street in Jerusalem now referred to as Pontius Pilate’s Street.

He was the Roman prefect of Judea at the time of Christ’s trial and execution. This fact alone has guaranteed Pilate’s infamy throughout all time as he ordered the execution of Christ. There are few historical artifacts related to Pilate including a ring which might have belonged to him, and the so-called Pontius Pilate Stone which bears an inscription including his name.

There has been little uncovered archaeologically related to this man of such importance. The recent discovery of a road in Jerusalem made by him comes as a welcome addition to discoveries related to this historical figure.

Archaeologists have identified a street in Jerusalem made by Pontius Pilate which held particular importance to the Jewish population of Christ’s day. It is nearly 2,000 feet long and connected the Siloam Pool where Jerusalem pilgrims might refreshen themselves, to the Temple Mount, the holiest place in Judaism.

The fact that Pilate built a street for the use of Jewish pilgrims suggests he may not have been so self-serving and had a softer side. Of course, the more cynical might argue the roadway was likely built by Jewish conscripts merely to placate the local population. 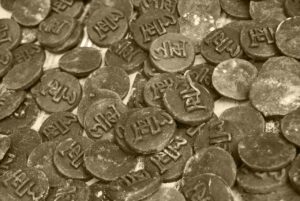 The street has long been known to exist by archaeologists as early as the 19th century. Only recently has the age of this street been uncovered, and its likely association to Pilate established.

Archaeologists from the Israel Antiquities Authority and Tel Aviv University dug deep under the street to find artifacts that might help place a date on the street’s construction. They found dozens of ancient coins, with the most recent dating to AD 30/31. The date of these coins fund under the street establishes the street’s age.

Archaeologists also note the lack of coins minted after 30 AD which were much more common.  Since these coins have not been found under the road, it is likely the road was built around the date of the latest coins found.  A coin expert, Donald Ariel noted,

statistically, coins minted some 10 years later are the most common coins in Jerusalem, so not having them beneath the street means the street was built before their appearance, in other words only in the time of Pilate.

In addition to coins, other artifacts confirm the age of this ancient street.

The road links two important structures which were very important for the ancient Jews – the Siloam Pool and the Temple Mount.  Pilgrims would refresh themselves at the pool, and then make the trek along the newly built road to the Temple Mount. 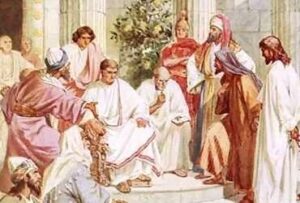 Pontius Pilate is described by historians in a decidedly negative manner, particularly among Christians. Ancient records also showed by was particularly hated by the local Jewish population as he seized money from the sacred treasury to build an aqueduct, violated Jewish religious laws and customs, and had protestors clubbed to death.

Philo was an ancient writer who lived between 20 BC and 50 AD who wrote that the people of Judea were particularly not fond of Pilate due to his cruelty and dishonest behavior, He wrote about “the briberies, the insults, the robberies, the outrages, and wanton injuries, the executions without trial constantly repeated, the ceaseless and supremely grievous cruelty” that Pilate constantly committed.

Eventually, this cruelty prompted the people of Judea to write a petition to the Roman Emperor Tiberius requesting he intervene.

The importance of this street is evident from its dimensions as well as fron the quality of its construction, which undoubtedly required an expansive workforce that included skilled laborers and craftsmen.

It is no longer possible to view this first period of direct Roman governance in Judea as one exclusively characterized by self-interest and corruption.

Reaction From Other Scholars

The work has been applauded by scholars not directly associated with the project.

The former chief archaeologist of Jerusalem wrote that “about the date – there can be no dispute. He noted the street was likely a dirt road before Pilate decided to pave it.

Hillel Geva, director of the Israel Exploration Society suggested there is a chance the street might have been paved by another later historical figure. However, she noted if this were the cause, “we should expect to find post [Pilate] coins under the street.”

So far, no more recent coins have been found under the road establishing the construction date as about AD 30.

The historicity of the Bible has constantly been called into question. Until recently within the past few decades, there was precious little extra-Biblical confirmation of the historicity of Scripture, or even whether many important Biblical figures even existed.

Modern archaeology has been particularly important in establishing the historicity of many important ancient Biblical people including Hezekiah, King David, Omri, Jehu, and many others.

Pilate was the Roman prefect over Jerusalem for only a few years before he was replaced. The shortness of his term may help to explain why historical artifacts are minimal.

Finding a road that was likely built by him for the express use of the local Jewish population helps place him firmly in history, and perhaps shows a softer side of his historical reign.

The Sifting Project attempts to locate ancient artifacts in discarded debris from the Temple Mount from 1999.  At that time, access construction into an underground structure removed thousands of tons of sensitive debris. Historical Importance There has long been controversy about whether Scripture portrays an accurate representation of actual history. … Read More »

The Pilate Ring The New York Times reported on the discovery of a ring bearing the name of Pontius Pilate – the Roman official who ordered the killing of Christ – now called The Pilate Ring.. It was discovered in the late 1960s as one of the many artifacts found… Read More »