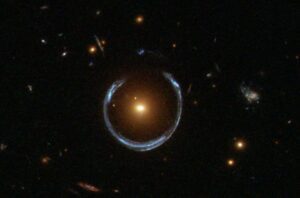 The current understanding of gravity is based upon Einstein’s general theory of relativity which is itself based upon classical physics.  The other three fundamental forces (electromagnetic, weak nuclear force, and strong nuclear force) are described within the field of quantum mechanics which uses totally different formulations.

Additionally, gravity is generally understood as operating within a large distance scale such as between planets, while the other three forces are operable on an atomic scale and subatomic particles.

The field of quantum gravity attempts to understand gravity on a subatomic scale – generally at length scales near the Planck scale of about 10^-35 meters.  This scale is much smaller and associated with far greater energy than what is achievable in modern nuclear accelerators.  The entire Universe is believed to have started in this extremely small length scale where the effects of quantum gravity would be operating.  The focus of these theories is to find a way to escape a singularity – that is, the creation of space and time at a moment in time.

Quantum gravity becomes important in this discussion as it has been used to try to produce bouncing of oscillating universes.  The solution sought is how to have the possibility of an eternal number of expanding and contracting universes that could do away with the need for a “singularity” or an absolute beginning.  However, Roger Penrose who worked with Stephen Hawking on the first space-time theorems suggested this was not a likely possibility,

I don’t think it can be quite like that.  If it were like that, the big bang would have resulted from a previously collapsing phase.  We must ask how that previous phase could have had such a low entropy.  This picture would sacrifice the best chance we have of explaining the second law.  Moreover, the singularities of collapsing and expanding universes would have to be somehow joined together, but they seem to have very different geometries.

The very earliest moments of the existence of our Universe looked very different from our current existence.  The force of gravity was extraordinarily much stronger, similar to the strong nuclear force which holds the atomic nucleus together.  Because there is no way to probe the extraordinarily elevated energies at these very early times, there have been many fanciful speculations concerning the physics that might be operable then.

However, any theory concerning the physics involving the very early Universe has the constraint of needing to produce the current Universe in which we now live.  Many quantum gravity theories have been discarded as they do not allow for our current Universe.

Some of these models produce such a Universe in which detection of quasars would be impossible and so are clearly wrong.  The lack of significant blurring of distant quasars means the space-time fabric is smooth to a high degree which implies the theories of the theory of special relativity can be applied everywhere – even in the initial moments of the Universe’s creation.

The lack of a blurring effect also establishes the strongest constraint upon the variability of the velocity of light.  There have been theories which propose the speed of light might vary over time or distance which would have a profound influence over our understanding of the various cosmic phenomenon.  However, the smoothness of space-time throughout the universe establishes the velocity of light in a vacuum cannot vary by more than a few parts in 100 million trillion trillion.

Pulsar-black hole binary.  Cosmologists are on the hunt for a pulsar-black hold binary combination because such a discovery could go far in confirming the physics of

relativity.  Pulsars are highly magnetized rapidly rotating neutron stars and white dwarf stars and are the most accurate natural clocks in the Universe.  They produce a blinking beacon with a frequency that is extremely regular.  In a pulsar-black hole binary, the pulsar could orbit just outside the event horizon of the black hole where the effect of gravity becomes so powerful that even light cannot escape.  Such a situation would allow astronomers to determine the degree and manner in which information might be able to escape from a black hole. Quantum fluctuations in space-time geometry would cause an increase in the measured deviation of the arrival times of the beacon from the pulsar.  The degree of this variability would help determine which of the competing models of quantum gravity seems most correct.

Only one hundred years ago, cosmologists believed the universe was infinite in size and age.  This was not so much an empirically observationally developed theory as it was a philosophical assertion developed by Kant.  As the century progressed, the Universe has been found to have finite boundaries in both size and age.

The idea of a universe bounded in time has been vigorously opposed by many in the scientific community as it supports a creation model strangely like that proposed in Scripture.

Several avenues in this opposition were developed by evaluation of the quantum gravity world; when the universe was extremely small and gravity was the same strength as the other three forces of nature.  Various quantum theories were developed attempting to bypass the creation model through either an oscillating universe model whereby the universe would expand and contract endlessly or through a steady-state creation model where all matter is created spontaneously throughout space giving it a uniform appearance and density.

Observation and physics considerations have made both of these theories untenable and they have been discarded.

More recently, attempts to circumvent a creation moment have come from quantum gravity and how tiny variabilities in space-time would become magnified over time and distance since the universe began.  However, observations of distant objects indicate that there is little variability in space-time as would be predicted by most quantum gravity models and so they are discarded.

Most recently, many exotic theoretical claims trying to avoid a singularity have been developed trying to evoke some way to get a cosmic bounce from a previous period of cosmic contraction – in essence, a rehash of the oscillating universe theory.  These theories all propose the introduction of some unknown, undiscovered physics which cannot be directly measured or known but which might negate the need for an absolute beginning.

The general progress of physics over the past century has been toward support of the Biblical creation model; that is, the universe was created at a single moment in time – a singularity.  Science continues to support the Creation model while it progressively eliminates other more exotic models leading some cosmologists in desperation to propose models that can never be supported by observational or empirical science.

The space between stars is mostly very empty with a density of about one atom per cubic centimeter.  However, there are interstellar clouds of matter swirling in space which possess a much greater density.  These clouds are in a balance between expansion and collapse.  Their internal heat makes them want… Read More »

The Beginning of Time
Oscillating Universe