The Royal Steward Seal from the First Temple era in the 7th century BC has been uncovered in Jerusalem. Excavated from the foundations of the Western Wall demonstrate the presence of Jewish people in the land of modern-day Israel dating back 2700 years.  This discovery is extremely important as it establishes Jewish history in Palestine for thousands of years. 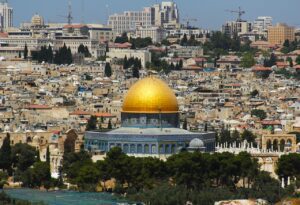 Archaeological explorations throughout the land of modern-day Israel continue to affirm the Biblical narrative. Earth excavated from the foundations of the Western Wall in 2013 has yielded many artifacts dating back to the First Temple period in Israel. Several weeks ago, a national service volunteer unearthed the one centimeter inscribed letter sealer which bears the name of a character found several places in the Old Testament.

The inscription portrays the name of Adoniyahu (in the English Bible written as “Adonijah”) as the Royal Steward. This position was the highest-level minister in the royal court. Clay bullae like this one were used to seal important documents usually from the royal court.

The tiny bulla reads, “Belonging to Adoniyahu the Royal Steward.”

Possible Relationship with an Ancient Grave

The new Adoniyahu inscription is important in other ways as well. It is a potential link to a 150year-old mystery of a 7th century BC rock cave grave possibly belonging to this individual. The grave was excavated in 1870 by Charles Clermont-Ganneau and has represented somewhat of a mystery since its original discovery.

Holing the seal in his hand, archaeologist Eli Shukron noted,

After 2600 years, you come and hold this bulla, which was used to seal a letter, that was sent 2600 years ago by the highest minister in the kingdom, it’s something amazing … it makes my heart skip a beat.

The bulla was unearthed by the sifting project – a funded archaeological research project carefully going through tons of waste dirt excavated from the Western Wall illegally.

The most famous Adoniyahu is a son of King David and Haggit who is called both Adoniya and Adoniyahu and is mentioned in 2 Samuel 3. .

Two others are recounted in the Bible. One is a Levite who lived during the reign of King Jehoshaphat mentioned in Chronicles. The other Adoniyahu lived during the rule of Nehemiah during the Persian era of the Second Temple (Nehemiah 10:16).

The Steward bulla joins many other recently discovered archaeological artifacts demonstrating the historicity of the Bible. Christianity is not a religion of blind faith but has been proven true time and time again.

Possessions of ancient Biblical characters are being unearthed at an increasing pace as archaeologists explore areas not previously evaluated. People – like King David – who were thought by modern secular historians to be myths have had their existence and historicity proven by archaeological discoveries.

The Jezebel Seal Jezebel is the quintessential evil queen in the Old Testament and even today is emblematic of a sinful woman. Jezebel was the daughter of Ethbaal, an ancient king of the Phoenicians (1 Kings 16/31). The ancient Jewish historian Josephus notes Ethbaal was a priest of Ashtoreth and… Read More »

Pontius Pilate’s Street
Being an Agnostic