“Teleology” refers to explanations that offer design and purpose.  The teleological argument claims that certain aspects of the natural world are best explained as resulting from a designer.

This argument only proposes “a designer” and does not presuppose anything else about the characteristics of the designer.  There are several concepts that are contained within the teleologic argument, including irreducible complexity, intelligent design, and fine-tuning of physical constants.  The teleological argument suggests that choices by a Creator made to enable the current world are the most reasonable explanations for the observed phenomenon.

The teleological argument is often framed within concepts of mathematical probability and statistics.  This often leads to debates concerning the appropriateness of applying statistics to observations where perhaps there is incomplete knowledge.  This leads to criticism that the teleological argument assumes a “God of the gaps” where such an assumption may not be completely merited.

The best way to approach understanding the teleological argument might be to consider an example.  If a patch of sand were to appear looking like the letter C, an unbiased observer might best consider that patch to be the result of something completely random.  However, if the same observer were to observe the letters HELP written in the sand, this would be best considered the result of intelligence.

Another example might be finding writing on cave walls about ancient people’s history.  This writing might have spontaneously formed on the wall through some unexplained mechanism.  A much more likely explanation would be some intelligence wrote this information purposefully.

Arguments for design are often more intuitive than objects and more difficult to assess in some cases.  Improbability does not necessarily always imply intelligence.  However, the more unlikely the chance to produce a certain phenomenon, the more likely an intelligent designer would be.

Information in the Human Genome

DNA is the code within every cell that carries the information needed to make you.  It contained about three billion letters, with the letters used being A, G, C, and T.

These letters code for amino acids, which are the building blocks of proteins.  It is a complicated code, and there are error repair mechanisms in case a mistake happens.

No reputable expert would insist the message on the cave wall could somehow spontaneously form through some unknown mechanism given enough time and trials.  Yet, man of these same experts insist the vastly more complicated DNA did just that.

Another example might help illustrate this point.  In the card game stud poker, players are dealt seven cards, and they select the best five-card combination.  Cards are randomly dealt from a deck of fifty-two cards, and these cards are split into four suits – hearts, clubs, diamonds, and spades – all with thirteen cards each.  (In this example, we will not be using Joker cards).  The best combination of cards is the royal flush, which includes the top five cards of a single suit.  The odds of this occurring in a fair, well-shuffled deck is about 1 chance in 31,000. 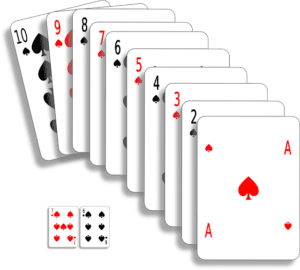 Other players would be disappointed if a royal flush were drawn by a player, but they would not consider the man cheating (probably).  While getting a royal flush is unlikely, it is not so unlikely as to be impossible.  However, if the same player got another royal flush on the next hand, the other players would rightly be more suspicious of something nefarious. The odds of getting two royal flushes in a row is 1 in 957 million.  While possible, these odds are extremely remote.

Moving from Poker to Creation

Attempting to refute a teleological argument for a Creator often results in similar difficulties, as some of the odds involved are vastly more unlikely than getting five royal flushes in a row.  it would be much better for a swimmer to believe that a sign with “Watch Out for the Sharks” was written by intelligence than just randomly appearing on a piece of wood.

While these arguments seem obvious when relating to royal flushes or a sign on a beach, they seem much more impactful when applied to teleological arguments for a Creator.  For example, those who consider the unimaginable sophistication of DNA – an actual ‘code’ – to have been made without any purpose are ignoring the logical implications of this code.

The teleological argument also involves situations that not only are very improbable but actually seem impossible.  For example, if a player in poker is dealt two of the same card – such as two Kings of Diamonds, it would be poor that something is wrong with the deck of cards or the dealer.  This is indeed the case with abiogenesis – the arising of non-life from life – which all scientific observations have shown impossible. 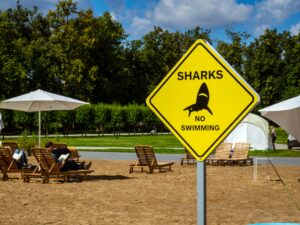 Critics of the teleological argument often counter these explanations as, “We don’t know how this happened, so God did it” – also known as “God of the gaps.”  This argument has had some merit throughout scientific history.  However, merely pointing out the appearance of a design or of a Creator is not a “gaps” error.  If a phenomenon appears to demonstrate intelligence to accomplish some purpose, it would not be logical to assume otherwise.  If a code is discovered within each living cell that appears complex, ordered, and accomplishes a purpose, it is logical to assume an intelligence behind its creation.  This is especially true if there are no alternative explanations to explain the code without assuming a Creator.

Critics might also respond to the teleological argument by acknowledging chance may not explain this phenomenon.  However, we should assume that a logical explanation will emerge with sufficient knowledge acquired over time.  This is especially true with abiogenesis, where origin-of-life scientists admit they have no good explanation for how life could emerge on Earth.

Other critics point out what they consider “poor design,” where a perceived flaw is held up as proof of the lack of an intelligent designer.  But this is a particularly poor argument as it assumes complete design knowledge.  A classic example has been the design of the human eye, where the retina was thought to be poorly assembled.  Further understanding demonstrates how eye engineering is much more complex than originally thought and how the design is actually important in keeping an eye working properly over a lifetime.

Critics of the design argument often admit that biology and nature give every appearance of being designed.  The only reason for not believing the obvious inference of a Designer is a preference – not science.  The critic can not countenance the existence of God or any Creator, so the inference of design must be refuted at all costs.  This is like the poker player who insists to the other players that “while it strongly appears I am cheating, please be sure to assume I am not.”

The teleological argument for a Creator is overwhelming for those considering the evidence without bias.  In fact, it was one of the main reasons why many atheists, such as Antony Flew, became believers in a Creator.

The Kalam Cosmological Argument is an attempt to demonstrate the existence of God by showing the universe is created and not eternal or self-existent.  The greatest minds throughout history have attempted to characterize the universe. However, these characterizations were primarily philosophical, as there was no way to objectively evaluate the… Read More »