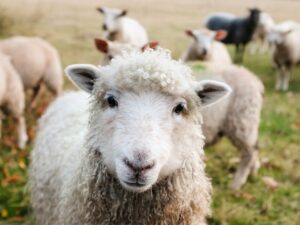 The David and Goliath story is one of the best-known passages in Scripture.  In this story, a 17-year-old shepherd boy comes to a battlefield where two opposing armies are camped. The Israelites are facing off with the Philistines, and there is a champion from the Philistines shouting at the Jews.

The Philistines are suggesting they have a one-off; a fight between two champions to decide the fate of each nation. The fight would be to the death, but only one person would have to die rather than hundreds from each side.

It seemed like a good idea – at least to the Philistines. The man shouting obscenities at the Jews was named Goliath. He was a giant from the lands of giants, Gath.

This had been going on for about 40 days and there was no end in sight. It was clear there was not a person in the entire Jewish army that stood a chance against this Philistine man. He was huge, battle-tested, and armed to the gills.

David and the Slingshot 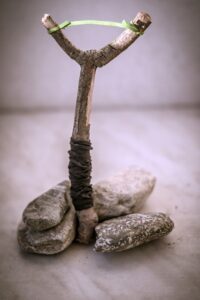 Slingshot Used by David – Image by Henryk Niestrój from Pixabay

David was a shepherd boy who gained some expertise with a slingshot while out watching his sheep. This was likely a very boring job – not much happens out there in the fields with his sheep.

But occasionally, the quiet is disturbed by predators who would like to get one of those sheep for a tasty dinner. David then would use his slingshot to scare the animal off – or kill it if need be. David was a good shot.

The confrontation likely occurred in the 11th century BC as recorded in Scripture. The question is, however, is this an accurate representation of a historical fact or is it a fanciful myth written much later by scribes wanting to embellish the Jewish history.

Up until recently, there was little archaeological evidence to support a race of giants and the story was assumed to be a much later fabrication. In fact, most of the Old Testament was considered to be a fabrication until recently when ancient artifacts kept being found to substantiate the Biblical narrative.

It looks like the same thing has happened with this story.

Archaeology, History, and The David and Goliath Story

The historical narrative of a champion one-off seems to have been an actual historical occurrence in ancient societies. This would the nasty carnage of two armies hacking each other to death in the middle of a field somewhere; only one person – the losing champion – had to die.

It turns out that the Biblical description of Goliath’s armor matches the kind of armor that was in common use at that time – and not at the time much later when liberal secular revisionists place the battle – if it occurred at all.

Archaeological evidence from the recently unearthed Philistine city of Gath supports the case of the biblical narrative.

Gath was the largest city of the Philistine nation – a loosely connected confederation of tribal lords who ruled the area southwest of Israel. The Israeli newspaper Haeretz noted that,

in 2017, archaeologists digging in the ancient Philistine capital discovered an inscription in a small shard of pottery, found lying on a floor of a house dating to the 9th century BC. It has yet to be deciphered, but it was the second example of Philistine writing found in Gath: In 2005 the excavators found an inscription, with two names: WLT and ‘ALWT. Linguists explain that the etymology of the names ‘ALWT and WLT is similar to that of the name Goliath.”

David with Goliath’s Head – Image by WikimediaImages from Pixabay

He had a bronze helmet on his head and wore a coat of scale armor of bronze … on his legs he wore bronze greaves, and a brown javelin was slung on his back.” (1 Samuel 17:4-7).

Archaeologists revealed that the description of the armor worn by Goliath is accurate for its time period: a bronze helmet, a coat of bronze mail, bronze greaves, scimitar (curved sword with a convex cutting edge), and a bronze spear.

Greaves were worn to protect the legs and archaeology reports they were worn by Mycenaean warriors in the 3rd century BC and later. Bronze greaves were also found in graves from Greece to Cyprus.

Authors from centuries later when liberal secular revisionists propose the “myth” was written would have had no idea as to the items worn by soldiers in battle. Skeptics supporting a fictional origin of the story suppose the story of Goliath represents the Greek “hoplites” which are heavily-armed soldiers.

However, the hoplites did not use scale armor or shield-bearers as Goliath was reported to use.

The Philistines have Aegean origins and dressed like the Mycenaean who were from the same geographic region.

War by Proxy in the David and Goliath Story

David by Michelangelo – Image by christian hardi from Pixabay

This day I defy the ranks of Israel! Give me a man and let us fight each other. On hearing the Philistine’s words, Saul and all the Israelites were dismayed and terrified. (1 Samuel 17:10-11).

War by proxy was a common practice during the Bronze age. The peoples assumed their gods would intervene and save them – if not, then the gods must be angry for some reason.

For example, the Egyptian warrior Sinuhe tells of his one-on-one battle with a powerful champion,

When he charged me, I shot him, my arrow striking in his neck. He screamed; he fell on his nose; I slew him with his ax.”

He made the bow, appointed it his weapon. He mounted the arrow, set it on the string … with raging fire he covered his body.:

But perhaps the most famous champion story is from Homer’s Iliad with the battle between Paris and Menelaus.

Literacy of the Ancient Hebrews

The ancient Hebrew civilization at the time of David was largely illiterate. Skeptics have argued that there is no evidence of Hebrew scribes in Jerusalem capable of writing down the story and therefore it must be an invention from a later period.  These skeptics apparently do not believe a story could be passed from generation to generation as an oral tradition.

Therefore, it must have been an invention from much later – probably during the time of King Hezekiah. 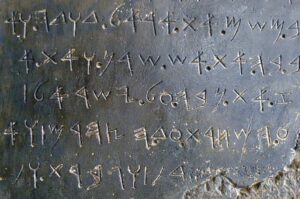 However, it is also true that Hebrew writing dating from the 8th century exists in the form of ostraca, seals, and graffiti. Also, there is the Mesha Inscription (the Moabite Stone) written from the 9th century BC), the Tel Dan stele with its inscription written in Aramaic both originate in the 9th or 8th century BC.

The David and Goliath story has captivated readers for centuries. It represents the classic story of good winning against evil despite incredible odds, and of faith winning against paganism.

Until recently, there was very little evidence as to the historicity of this tale. However, archaeologists now believe the story has support from what we know concerning the battle armor worn by soldiers of that ancient time. We know Gath was a Philistine likely originating in the Aegean Sea area where artifacts of the type worn by Goliath were found.

It was a time when writing first became more common, and when scribes would document the history of the Jewish nation.

The story of Goliath has received significant support and will likely receive further archaeological and historical support with further investigation.

Most Christians are not familiar with the ancient Jewish legal and so are unfamiliar with a bulla and how the bulla affirm the Bible. Many Scripture characters were important people in their time and produced bulla during their lifetimes. Today, we have legal contracts where a signature is confirmed by… Read More »

« Tabernacle Found at Shiloh
Ahab in the Bible »

Leave A Response to "The David and Goliath Story" Cancel reply