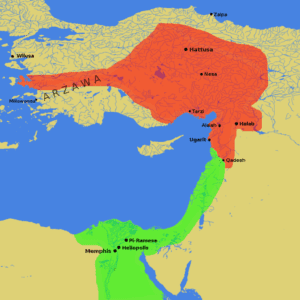 The Hittites were an ancient civilization that arose and fell several times during Old Testament times.  They were a powerful group with a formidable army that was powerful enough to invade Babylon.

In fact, they eventually grew so strong and expanded their empire so widely that they became an ancient superpower on the same level as Egypt and Assyria.

The two kingdoms would eventually clash in the region where they meet each other – modern-day Syria.  The Battle of Kadesh is dated to 1274 BC and represents the earliest battle in recorded history for which detailed battle plans are known.  It is also though to be the largest chariot battle with between 5,000 and 6,000 chariots involved. 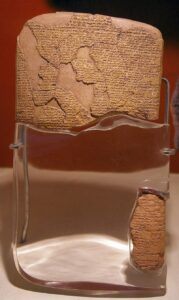 Egypt was invading Hittite territory from the south and was eventually stopped by Hittite forces near the city of Kadesh on the Orontes River in modern-day Syria.  Both sides suffered heavy casualties with neither side able to prevail decisively.  The battle continued for about fifteen years until an eventual treaty was signed.

Both parties had an interest in making peace as each power was being challenged elsewhere in their respective empires.  Egypt was facing a threat from the “Sea Peoples” while the Hittites were concerned about Assyria to their east.

The battle also led to the earliest known peace treaty for which we have detailed information with an Egyptian version located at Karmak, Egypt and the Hittite version in the Istanbul Archaeology Museums.

The Hittite version is inscribed in the ancient Akkadian language and is written on baked clay tablets which were uncovered from the Hittite royal palace.  It was undoubtedly hoped by the two competing nations that the peace treaty might end a centuries-old conflict.

Unfortunately, the peace treaty did not lead to a lasting peace between the two ambitious empires.  The treaty remained in force until the Hittite Empire collapsed about eighty years later.

Importance of the Hittite Empire

The German archaeologist Hugh Winckler excavated the site of the Hittie capital, Hattusa now located in Turkey.  They found the royal archives which consisted of 10,000 clay tablets detailing many of the Hittite’s diplomatic activities.  Within those thousands of tablets, they were able to identify three tablets containing the peace treaty mentioned above.  Winkler noted the importance of his find,

a marvelously preserved tablet which immediately promised to be significant. One glance at it and all the achievement of my life faded into insignificance. Here it was – something I might have jokingly called a gift from the fairies. Here it was: Ramses writing to Hattusilis about their joint treaty … confirmation that the famous treaty which we knew from the version carved on the temple walls at Karnak might also be illuminated from the other wise. Ramses is identified by his royal titles and pedigree exactly as in the Karnak text of the treaty; Hattusilis is described in the same way – the content is identical, word for word with parts of the Egyptian version [and] written in beautiful cuneiform and excellent Babylonian … As with the history of the people of Hatti, the name of this place was completely forgotten. But the people of Hatti evidently played an important role in the evolution of the ancient Western world, and though the name of this city, and the name of the people were totally lost for so long, their rediscovery now opens up possibilities we cannot yet begin to think of.

The treaty concludes with an oath before “a thousand gods, male gods and female gods” of mutual fidelity and witnessed by “the mountains and rivers of the lands of Egypt; the sky; the earth; the great sea; the winds; the clouds.”

Breaking the treaty would subject the offending party to being cursed by the gods who “shall destroy his house, his land and his servants.”  The treaty’s importance is that it was not just a treaty of peace, but really cemented an alliance between the two empires.  The treaty pledged each of them to come to the aid of the other and to help suppress rebellions in the other’s lands.

Fate of the Hittites

The Hittite Empire did not die in a spectacular fashion likely some, but rather it seemed to dissolve into smaller competing factions that gradually were absorbed into other smaller cultures.  They gradually were merged into smaller populations in Turkey and Mesopotamia and were lost to history until uncovered a mere century ago.

The very existence of this vast civilization was in doubt until their recent discovery lending credence to the Biblical narrative.

Interest in the Hittite civilization increased with the founding of Turkey and regional pride and nationalism.  The popularity of ancient Hittites in Turkey led to the renaming of many Turkish institutions including the state owned “Hittite Bank” and the foundation of the Museum of Anatolian Civilizations in Ankara. 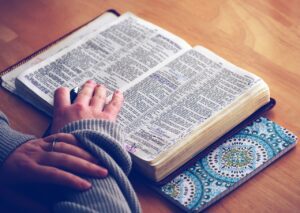 The Hittites played an important although peripheral part in Scripture.

Ephron the Hittite sells Abraham land that would be used as his family’s burial ground (Genesis 23).  Esau married Hittite women for which he was despised by Rebecca (his mother) in Genesis 26:34).

The Hittites are frequently named as one of the inhabitants of the land of Canaan, and David had Uriah the Hittite killed in order to acquire Uriah’s wife (2 Samuel 11).  and Solomon had Hittite wives among his many other wives (1 Kings 10:29-11:2).

The internet allows those with determination and adequate time to spend the ability to survey the world’s knowledge regarding a topic.  One particular site on Patheos has done just this with regard to 19th century contention that the Hittites were mythological.  One reference might prove illustrative of the entire document quoting Hal Flemings, Examining Criticisms of the Bible published in 2008,

Up until the late 1870s, critics argued loudly that the Hittites were a myth, that the Bible’s references to them were inaccurate and non-historical. Even early editions of the respected Encyclopaedia Britannica referred to the Hittites as “a mythological civilization mentioned only in the Bible.” All that changed when archaeological discoveries produced startling evidence of a thriving Hittite civilization.

The point is that many secular and liberal theologians doubted the historicity of the Hittite Empire until it was definitively located and its historicity established.

While Scripture is certainly not a book of ancient history, its historicity does seem to be repeatedly established with new archaeological excavations.  Maybe it deserves another look.

Leave A Response to "The Hittites" Cancel reply