Finding the House of David Stele was important as the existence of an actual, Biblical King David had been called into question for centuries and was considered only a myth by secular historians. They scoffed at the idea there could have been an organized, ancient kingdom of Israel that could be powerful enough to fight against ancient civilizations.

Furthermore, the Biblical Kingdom of David was associated with other ethnic groups which were also thought to be mythical – or at least severely enlarged in order to fit the narrative.

This becomes important because the Old Testament is very consistent with insisting the coming Jewish Messiah would be a descendant of King David – that he would sit on his throne and just the nations.

If there were no David – then there likely could be no Messiah because obviously the history is all mythological. Simple as that

No one believed in the existence of King David (or any of the other ancient kings) believing there was no evidence for a large, organized kingdom as portrayed in Scripture.

Then the Tel-Dan stele was discovered showing there was, after all, a “house of David.”.

Discovery of the Stele 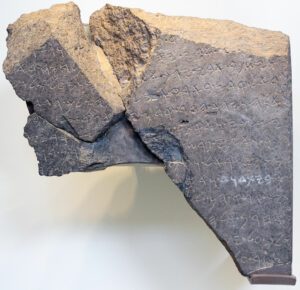 The discovery of the Tel Dan Steele was by accident. Architects at an excavation site were documenting structures and installations dug up during excavation. Gila Cook, an architect for Avraham Biran’s excavations at Tel Dan, was working at such a site in 1993.

Cook noticed a stone that had been incorporated into an ancient structure centuries ago. What was unusual about this particular stone structure was it had writing chiseled into it.

She recognized the Hebrew-like letters and worked with others to remove the stone from the wall. The inscription was found to be written in Aramaic and was part of a victory stele from a king.

Further excavations found more parts of the stone and became known as fragment B1 and B2. These two fragments fit together with the larger fragment.

The stele provided documentation of ancient history in the city of Dan. It talked about the Syrian conquest followed by Israelite reclamation. After the ancient Jews reclaimed the city from the Syrians, they used the broken Syrian victory stele as part of wall construction to insult the king.

But this was more than just an ancient inscription from an ancient Syrian monarch. The stone represented the first extra-Biblical artifact referencing King David.

These fragments were dated to the late ninth century BC and have been attributed to King Hazael of Syria who lived during this time frame and who was an inveterate enemy of the Jewish nation.

Some skeptics called the stones a forgery. But their origin in the wall structure of an ancient building has been meticulously documented.

Also, the different fragments were found separately, buried under layers of hard-packed sediment making forgery unlikely as an alternative explanation.

The Tel Dan Stele has been studied for many years with many academic articles written to defend and criticize the findings. It is no recognized as a genuine piece giving authenticity to an ancient “House of David,” with recognition given that ‘house’ by an ancient powerful king of Syria.

This is how the historical situation looked only a few short decades ago. The Old Testament was largely a more recent record of ancient scribes wanting to glorify their past with mythological tales of Red Seas parting and Jericho’s walls tumbling down.

The discovery of pieces of the Tel Dan Stele in the ancient Northern Kingdom city of Dan provides evidence of the historicity of several ancient Hebrew Kings. The stones carry an Aramaic inscription likely written by Hazael (841 – 800 BC) who was an ancient king of Aram-Damascus. He was an important figure in ancient history and was an intransigent enemy of the Northern Kingdom of Israel.

A translation of the stele is as follows:

The stele makes a distinction between two kings named Ahaziah and two with the names of Jehoram – they are rough contemporaries. One Jehoram / Ahaziah group is from the Northern Kingdom while the other Jehoram is from Judah in the House of David. In order to clear any confusion, it makes sense for the author of the stele to mention “David” in order to properly reference which Jehoram and which Ahaziah were both killed.

Ancient History in the Stele and Scripture

Apparently, Hazael created the victory stele in celebration of killing these kings at the battle at Ramoth Gilead in 841 B.C. as recorded in 2 Kings 8:28-29. Hazael was mistaken in his historical narrative; while both kings did die related to the battle, Hazael was not personally responsible for their deaths.

The son of Ahab, Jehoram, was wounded and went to Jezreel to get over his wounds. That turned out to be a terrible decision costing his life. Scripture reports that the prophet Elisha orders one of his students to go to Ramoth-Gilead for a conference with Jehu who was the military commander.

Jehu and the student met in an upper room separate from everybody else. The messenger told Jehu that he would be anointed a king and that he was to act as an agent of divine judgment against the house of Ahab. (Jehoram was the son of Ahab and would have been king).

Jehu then secretly entered Jezreel where Jehoram was recuperating from wounds suffered in battle. When Jehoram tried to escape, Jehu shot an arrow which ended up killing him immediately.

When Ahaziah discovered Jehu had killed Jehoram he tried to escape as well but ended up suffering the same fate. Jehu caught up with Ahaziah and he was mortally wounded and died several days later.

Jehu assassinated both the Judah Jehoram (the son of Ahab), and the king Ahaziah (from the house of David). Because they both died shortly after the battle, Hazael mistakenly believed he had killed them both. 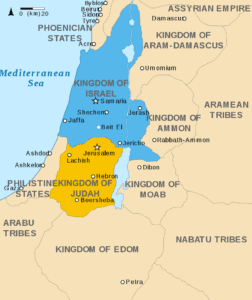 The Tel Dan Stele brings together the history of the two half as they fought against a common enemy – the Syrians.

But there is also more to the story. The northern tribes were led by wicked, ungodly kings especially King Ahab and his Queen Jezebel. They turned the northern kingdom against God and brought child sacrifice and idol worship into the land.

Both of these rulers were destroyed during this time frame leading to a revival of sorts in the northern kingdom. Unfortunately, this revival would be short-lived, and the northern tribes would be conquered by Assyria.

Most of them would be either killed outright or brought into slavery in Assyria; the southern kingdom would limp along for a few more years under various rulers until it too was overcome by another foreign adversary – the Babylonians.

The difference is that the southern kingdom then living in Babylon would be freed by the Persians who destroyed Babylon.

The remnant of the southern kingdom would be permitted to return to Jerusalem, rebuild the city, and establish a civilization that Christ would visit a few centuries later.

The Tel-Dan Stele provides confirmation of several ancient Biblical Kings and confirms the Biblical stated relationships among these kings and a foreign nation.

It also confirms the existence of King David’s “house” or dynasty, arguably the most important King of ancient Israel.

Prior to this stele, many academic archaeologists argued against the very existence of ancient Israel and its most important King.

There would be other confirmations of King David’s existence but this was the first.  There could be little doubt about the historicity of King David.  It was literally written in stone.

With this stele, that has changed. There is no recognition that the land of current-day Israel was the ancient home of a powerful Jewish nation which fought with ancient powerful civilizations.

Leave A Response to "The House of David Stele" Cancel reply