The moral argument is centered around the existence of objective moral obligations.  Objective morality might be thought of as the working morals of a society that guide normative behavior.

For example, most societies and individuals would agree that torturing puppies or innocent babies for amusement is not moral.  To believe otherwise would seem to render any moral judgments unfounded.

Since, for the sake of argument, some behaviors are simply unacceptable such as torturing babies solely for amusement or performing mutilating surgeries on fully awake patients against their consent.  If this is the case, then the moral argument might be framed as,

Premise 1 – If God does not exist, then objective moral values and duties do not exist

Do objective moral values and duties exist?  Does society agree upon these values only to ensure the benefit of most people?

Sometimes the existence of something can be best explained if the lack of that something is untenable.  In this case, the lack of objective morality makes all moral values “subjective,” resulting in “ethical subjectivism.”

With objective subjectivism, everybody’s moral opinion is considered equally valuable.  Everybody has their own concept of morality that is equally valued compared to everybody elses’ opinion.  There is no “standard” moral value against which to compare individuals’ moral values.

Ethical subjectivism denies the existence of an absolute, unchanging moral standard (objective morality).  Instead, it views ethical values as private, individual, and subjective.  Moral statements then reflect the subjective thoughts of an individual; the individual becomes the moral arbitrator of right and wrong.  Whatever a person thinks is right is right.

Nazi Germany would be an excellent example of the natural outcome of societies that ignore any objective morality but develop ethical subjectivism instead.  In their minds, genocide was perfectly acceptable because it extinguished an “inferior race.”  The murder of mentally deficient people or those with mental illness was defensible as ending out those who could not benefit the country.

Communist Cuba under Fidel Castro felt justified in using whatever force was needed to impose his revolution upon a resisting population.  Protestors were rounded up and shot; many disappeared into prison hellholes as they were tortured to provide information.  To Castro’s mind, such aggressive tactics were justified to bring the “wonderful benefits” of Communism to the people.

Similarly, in America, those who feel politically disaffected for various reasons may view the destruction of cities, burning down police stations, and murdering police as justified.  The popular phrase “no justice, no peace” exemplifies much of this thought process. 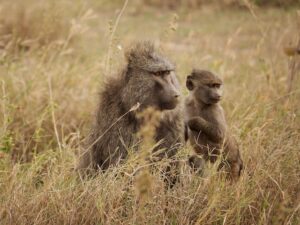 If God does not exist, why do humans have any moral worth?  The naturalistic worldview insists societal moral values are simply the by-product of biological evolution and social conditioning.  Whatever benefits society as a whole is defined as “moral.”  A troop of baboons might exhibit cooperation and self-sacrificial behavior to help all the baboons survive even if the individual does not.  Humans have developed similar behavior as baboons and exhibit sacrificial behavior that does not benefit them personally. 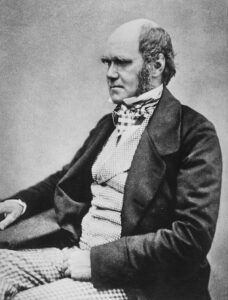 If we rewind the film of human evolutionary history and start again, people with different moral values might arise.  This occurred to Darwin, not noted in The Descent of Man,

If … men were reared under precisely the same conditions as hive-bees, there can hardly be a doubt that our unmarried females would, like the worker-bees, think it is a sacred duty to kill their brothers, and mother would strive to kill their fertile daughter; and no one would think of interfering.

Thankfully, we do not have the moral values of a hive of bees; incest and rape are taboo in most modern societies.  However, that does not mean incest and rape are intrinsically wrong.  Such behavior goes on all the time in the animal kingdom.  Without a lawgiver, there is no objective morality – only societal norms and rules are always subject to change.  Nothing is absolute; what is not moral behavior one year may become moral behavior the next.

As Pope Francis famously declared, “Who am I to judge?”

The Moral Argument According to Dostoevsky – Without God, Anything if Possible

Dostoevsky recognized this problem, arguing that “without God … all things are lawful.”

And Rakitin does dislike God. Ough! doesn’t he dislike Him? That’s the sore point with all of them. But they conceal it. They tell lies. They pretend. ‘Will you preach this in your reviews?’ I asked him. ‘Oh, well, if I did it openly, they won’t let it through,’ he said. He laughed. ‘But what will become of men then?’ I asked him, ‘without God and immortal life? All things are lawful, then. They can do what they like?’ ‘Didn’t you know?’ he said, laughing; ‘a clever man can do what he likes,’ he said. ‘A clever man knows his way about, but you’ve put your foot in it, committing a murder, and now you are rotting in prison.’ He says that to my face! A regular pig! I used to kick such people out, but now I listen to them. (The Brothers Karamazov)

Those with a naturalist, non-theistic worldview might define ethics according to what best encourages human flourishing.  The problem with this viewpoint is what might encourage human flourishing might be contrary to current social norms.

This has been proposed by such notables as George Bernard Shaw.  He asserted everybody should come before a panel every few years and show how they contribute to human flourishing.  If they fail in their interview to convince this panel, they should be executed – painlessly, of course.  This philosophy was applied in Nazi Germany when those who failed to produce as much as they consumed were killed.  These policies were then extended to those considered “unworthy” of continued existence.

Few have considered the practical results of a society with only subjective morals.

If moral relativism is accepted, there can be no moral progress for individuals or the larger society.  This implies that the end of slavery in America was not an advancement of moral virtue.  Without objective morality as the yardstick against which to compare any moral system, any such system assumes equal worth with every other system.

Moral relativism means nobody’s moral decisions and actions can be condemned.  What each person thinks is right is just as valid as what another person might think.

We would have to empty our prisons of violent felons because those prisoners’ actions reflect their equally valid belief systems.  Stealing might be viewed as a form of income redistribution.  Murder could be considered an evolutionary process whereby a stronger person culls out the weaker person.  Social Darwinism argues that over time, culling out weaker individuals strengthens society.

Moral relativism is an incoherent approach to moral values.  Total chaos would result from its universal application, and society would devolve into every man for himself.

Most people in a civilized society agree that the sexual abuse of another human is wrong.  Actions such as rape, incest, and child abuse similarly seem unacceptable.

Those who seem not to recognize objective moral values might be asked if they support the Christian Crusades or Inquisition or if they find the abuse of young boys by certain Catholic priests acceptable.  Most people will find certain behaviors to support objective moral values so objectionable.  Otherwise, there are no moral values, and no behavior can be found objectionable.  All prisoners must be released from prison, and all police forces must be dissolved, for all behavior is acceptable.

Such an outcome is preposterous but is the mandated outcome of ethical subjectivism.

This objection to objective moral values posits that evolution and moral conditioning ingrained our sense of morality into us.  Those values that further society’s improvement are acceptable but certainly not absolute.  If society’s requirements change, then morality changes as well.  This might explain Obama’s statement that his views on homosexuality have “evolved.”  Morality becomes defined by majority opinion, not by any objective moral standard.  Alternatively, morality becomes defined by the group willing to incite violence, cancel your life, or shame you into submission.

A modern example might be the near panic concerning climate change and the need to do “something” – no matter if that something is not at this time even possible.  We all are told that unless we cure this disaster happening all around us, the world is doomed.  Any argument against such “knowledge” is met not with discussion and research but with vitriol and violence.

The idea of sociobiological evolution as the cause of our moral constructs is more of a theory waiting for validation than knowledge.  But naturalism holds that it must be true; otherwise, they have no other explanation other than to consider objective moral values.  But to consider objective moral values brings into view the possibility of a lawgiver that cannot be countenanced by a naturalist worldview.

The concept of a sociobiological origin of moral values then fails with a circular argument, no scientific verification, and belief out of necessity rather than scientific inquiry.  It is, in short, a giant leap back to before the Scientific Method when facts are asserted because they must be true for a certain worldview.

We as a society must do better than that!

The first two promises of the Moral Argument are likely true,

The only conclusion that can be derived if the first two premises are true is that God exists – there is no wiggle room to assert anything else.  The first two premises seem to be rather self-evident especially when considering the consequences of their disbelief, as noted above.

“Teleology” refers to explanations that offer design and purpose.  The teleological argument claims that certain aspects of the natural world are best explained as resulting from a designer. This argument only proposes “a designer” and does not presuppose anything else about the characteristics of the designer.  There are several concepts… Read More »

The Kalam Cosmological Argument is an attempt to demonstrate the existence of God by showing the universe is created and not eternal or self-existent.  The greatest minds throughout history have attempted to characterize the universe. However, these characterizations were primarily philosophical, as there was no way to objectively evaluate the… Read More »

What is the meaning of life to an atheist?  Richard Dawkins chimed in on this topic when he opined as to whether life has any meaning at all.  In his book, The God Delusion, he noted, If the universe were just electrons and selfish genes, meaningless tragedies … are exactly what… Read More »

God and Evil Why does God allow such evil to exist in the world?  Since God is all-powerful, why has he designed a world where there is so much pain and suffering? This is a question that has been addressed for centuries by some of the greatest Christian philosophers in… Read More »

Leave A Response to "The Moral Argument" Cancel reply