The multiverse has been proposed as a means for getting around the statistical impossibility of forming the universe by chance.

A statistical impossibility is frequently taken as being any event that has less than one chance in 10^200. This number is chosen as the maximum number of events that could transpire since the universe began.

This is derived as the number of cubic Planck lengths in the observable universe (3.6E+132) times Planck times since the universe began (2.4E+62) calculated from terms given here. Since this number is easily exceeded by the chance of several finely tuned physics constants to be derived by chance, it would seem like the current universe should be impossible to derive.

Yet here we are.

The multiverse has been suggested as a means to surmount these odds. This supposition is to suppose quantum physics has produced a space-time “foam” to form. It is then suspected that, somehow, this foam budded into an infinite number of baby universes each of which had different physical properties.

Since there could be astronomically large number of these universes (pun intended), it could be possible for our current universe to have formed by chance.

This could all be done without invoking a Creator. The argument is that with an infinite amount of universes, there is bound to be at least one with the correct physical constants for life to occur.

This is the theory of the multiverse. Note – a theory, because despite the multiverse being involved in many science fiction story lines, there is no observational evidence to suggest such a system is in fact true.

Timing of the Multiverse Concept 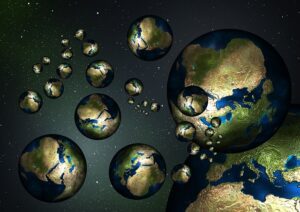 Image by Gerd Altmann from Pixabay

The multiverse has only been a concept in cosmology since the need arose to somehow circumvent fine tuning.

There are many finely tuned physical constants whose probability of formation is not statistically possible given the amount of time since the universe began. Cosmologists have tried to get around the multiverse concept by supposing there are an infinite (or nearly infinite) number of other universes out there.

For centuries, nontheist scientists and other observers have posited design was not a feature of the universe. Many have thought the universe was merely infinite in size and duration, and the same in every direction. Nothing special.

Any observed evidence for any kind of design was far too insignificant to be worthy of any consideration.

However, our current understanding of the universe makes this concept not credible. There is a considerable fine-tuning of many physical constants independently of each other. Furthermore, we have no reason to suppose that any of these physical constants have to be their particular value. Cosmologist Paul Davies remarked,

“[There] is for me powerful evidence that there is “something going on” behind it all. The impression of design is overwhelming.

Non-theist scientists developed the multiverse theory only when it became obvious there was considerable apparent design throughout the entire universe (and within every one of us).

Explanatory Capacity of the Multiverse 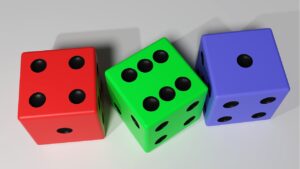 The probabilistic resource of the multiverse is not infinite.

The infinite universe concept of the multiverse explains a lot – too much in fact. The problem for the non-theist is that not only does it attempt to explain away God – it also explains away everything else.

This is the obvious philosophical fallacy when an infinite number of everything is posited.

Furthermore, there would be no way to determine whether something happened because of a law of nature – or just the multiverse.

Design Seen in All Size Scales 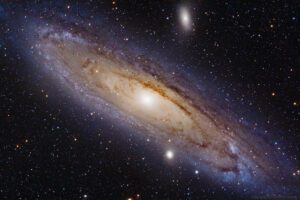 The Andromeda Galaxy is composed of billions of stars, and there are about one-hundred billion stars in our galaxy.

It is not just the universe as a whole which demonstrates design features through the laws of physics, it is everything else that shows elements of design. Any volume size chosen will provide evidence of design which makes life and the universe possible.

Whether it is in our supercluster of galaxies, the characteristics of stars and production of elements, the composition, and character of the Milky Way Galaxy, our solar system, our planet, plants and animals, individual cells, molecules, atoms, and fundamental particles.

Everywhere you look, there is evidence for design. Things have to be the way they are within very severe limits for intelligent life to have formed.

Time Scale. As more and more investigation is performed in the physical sciences, more and more evidence of physical design is obtained. The entire biosphere of the planet and the characteristics of the universe have to be the way they are in order to enable life on this planet.

Size Scale. Just as with time and as noted above, every size scale from the entire universe as a whole down to the fundamental particles such as quarks and gluons, everything appears designed so that chemistry and biology can proceed. The more details we learn of galaxies, stars, planets, and ourselves, the most design features are uncovered.

These same design features are documented in various realms of science from geophysicists, ecologist, microbiologists, molecular biologists, or particle physicists to name a few.

It seems irrational and illogical to discard all this observational evidence in favor of a philosophical need to exclude a designer. When all the evidence points in that direction – then it seems prudent to consider a designer as a possibility.

“The more I examine the universe … the more evidence I find that the universe is one sense much have known we were coming.

The Multiverse Fails as a Testable Hypothesis

Most scientists agree that the possibility of a multiverse is not a testable hypothesis by definition. A universe is self-contained and does not interact with other universes – otherwise, it would not be a “universe.”

This impossibility states that if there were a trillion other universes, we could only discover information about our own. This is why many scientists contend that any discussion about a multiverse is not science but only speculative metaphysics.

An interesting analogy to the multiverse theory has been proposed to help demonstrate its philosophical difficulty.

The multiverse claims that it has such huge probabilistic resources that anything becomes possible.  A coin landing on its head ten thousand times in a row would be no big deal!

But the problem that arises is that everything becomes possible – even necessary – in a multiverse with an infinite number of universes.  In the final analysis, the multiverse ends up explaining nothing – because it can explain anything.

You could propose that if there were an infinite number of people tossing a coin in the air and that one of them flipped ten thousand consecutive times. You would then presume that flipping ten thousand heads in a row would be no big deal. Such is the claim bade by the multiverse theory.

The multiverse theory has been proposed as an alternative to there being a Designer of creation.

There is good theoretical physics evidence to believe the other universes in the multiverse could never be seen or detected. This would mean it could never be proven by science and remains an untested hypothesis.

A scientist would rebut that the existence of God can also never be proven. However, there is considerable circumstantial evidence for a Creator.

As we show elsewhere, Scripture is being proven accurately historically from archaeological evidence. More and more artifacts from ancient Israel are coming to light which proves the Biblical narrative.

The question separating Christians from non-believers is what happened to the body.

I do not believe God will ever totally reveal himself to us prior to the Second Coming. We are, after all, supposed to walk by faith and not by sight. This site is to show evidence for belief in a Designer and Scripture is overwhelming.

Additionally, it becoming more clear with each passing year as science discovers more of the physical world and more history is dug up in Israel.

Leave A Response to "The Multiverse" Cancel reply