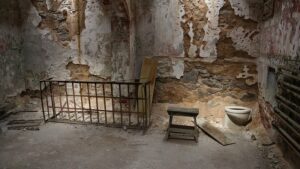 Image by Taken from Pixabay

Prisons and prison ministries are modern inventions used for warehousing people for various time intervals ranging from a few hours to a lifetime.

Prisons were a foreign idea to the ancient Jews.  They were given justice in other means such as fines, expulsion from the land, or corporeal punishment.

Prison is viewed in modern society as a place of punishment rather than a place for rehabilitation.  Prisoners lack social and job skills to have a successful life when released leading to high recidivism rates.  Christian prison ministries were developed to have a positive effect on these high recidivism rates by teaching prisoners life skills to have a chance at success.  These ministries also follow prisoners when released to encourage them to stay out of prison.

Some have argued that jails should offer vocational education training for job skills upon discharge.  However, job skill training is opposed by many labor unions as it would increase competition for union jobs.  Also, the skills that can be practically learned in prison may have little value in a post-discharge world. Some view vocational education in prison as a form of “slave labor” by forcing prisoners to work for little or no financial reward.

The employment market for convicts is very restricted as employers are reluctant to hire them into their employment force.  These employers are concerned about exposure to increased liability by hiring convicts, and the danger they might post to other employees.

Prisons are a relatively new invention.  People who committed crimes might spend some time in jail until they were tried or received their sentences – their sentence was not to lose their freedom to languish in jail for prolonged periods.

It was not until the eighteenth century that prisons, as we know them today, became popular, and were introduced as an alternative to physical punishment. 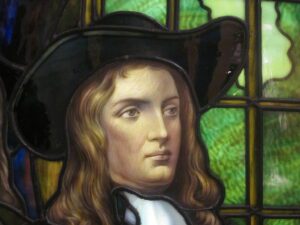 Prisons in America were started under the direction of Quakers.  The first prisons were in Pennsylvania under the direction of William Penn (1644-1718) whose Quaker beliefs prevented him from using physical punishment as a deterrent to crime.  He was hopeful prison could be used for multiple objectives.  Certainly, there was a punishment aspect, but also there was a restitution aspect.  Prisoners would work to restore the property and damage they caused if possible.  Finally, there was a restorative aspect where prisoners might be restored to the community as an active community participant.

Unfortunately, jails became infected with vice failed to meet these worthy objectives.  This lead to a prison system that was more directed toward making the prisoners sorry or “penitent” for their crimes.

The goal of a penitentiary is implicit in its name – to become penitent for the crimes you have performed.  Prisoners were to contemplate the evils they had done to society and so could not be in open contact with other prisoners.  Each prisoner was placed in an eight-foot by eight-foot jail cell and forced to live in silence.

While maybe a good idea – it did not work.  The prisoners who were released from prison were seldom reformed or penitent – they usually returned to the life of crime that got them in trouble originally.

Prisons failed to become “penitent” and so the penitentiary system as defined above was largely abandoned. Psychologists and social scientists believed prison should be a place where prisoners could be “reformed” even if they were not sorry enough for their past life of crime to be rehabilitated.

Prisoners were given “therapeutic counseling” in order for them to get “insight” into why they were engaging in aberrant behavior.  The state and federal governments spent huge sums producing programs trying to achieve the goal of rehabilitating prisoners by helping them discover the roots of their criminal behavior.

These efforts continued for nearly a century until the costs became prohibitive; other government spending priorities were being crowded out by prison expenses.  Also, the recidivism rate (the percentage of offenders who resumed criminal behavior after release from the hospital and returned to prison) had remained steady at about 70 percent.

The great majority of prisoners who were released from prison failed to learn from their “therapy” in prison and were readmitted shortly after release.  There are many reasons for this high return rate to prison including lack of vocational training, difficulty in finding jobs, lack of support when discharged, and by their criminal associates who accept them back into crime.

In the past few years, there have been attempts by religious groups to reduce this high recidivism rate by helping people find God.  The problem was how to avoid the failure Penn experienced by trying to get prisoners to become “penitent.” 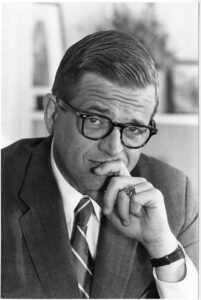 The past twenty to thirty years have seen the emergence of Christian activities within the prison walls to help reduce recidivism and help prisoners become active citizens when they are released using prison ministries.  Tens of thousands of volunteers are involved with these prison fellowship programs including the well-known Chuck Colson’s Prison Fellowship.

The Prison Fellowship has about fifty thousand volunteers involved in the ministry.  These prison ministries counsel offenders while in the prison, and then offer guidance and group encouragement after release from prison.

Studies have shown how Christian prison fellowship programs have a significant positive effect on prisoner recidivism.  Trying to determine whether a Christian program really works to reduce recidivism has proven difficult due to practicality problems.  The best way to make this determination would be to do a controlled study where half the prisoners receive Christian counseling while the other half do not.

The Prison Fellowship program was founded in 1975 by Charles Colson who was himself a prisoner in Federal prison upon a conviction of obstructing justice.  He was a former presidential aide to Richard Nixon.  The Prison Fellowship program is a Christian organization with 45,000 volunteers serving in prisons in the United States and throughout the world in 34 countries.  The program provides support and practical assistance to offenders, ex-offenders, and their families.

Even with these caveats, studies have been performed on the Prison Fellowship program trying to determine its effectiveness on recidivism and increasing the length of time after release from prison to re-incarceration.

The study found that there was,

Interestingly, the study showed that African American male prisoners were least affected by religious Prison Fellowship programs using prison ministries.  It is thought since African American prisoners are generally released into a poorer community that white prisoners, and have fewer opportunities for jobs after release than men.  This is a problem that will need to be further investigated by other studies as it offers a possible solution to improve job vocational skills, particularly in African American males.

The involvement of Christian religious groups in the jail system has been controversial.  Some argue that prisoners have an inherent bias toward becoming involved in these programs hoping to influence decisions of parole boards.  Generally speaking, involvement in religious programs is viewed as a positive factor determining early release.

Still, studies seem to show that prisoners involved in a prison fellowship program may have a genuine long-lasting effect upon the recidivism rates, especially when followed by vocational education training and continued church involvement.

Follow-up after release from prison is clearly an important factor in ensuring long-lasting positive outcome.  Vocational education enables ex-prisoners to get a marketable job skill to enable them to provide for themselves and their family without resorting to criminal behavior.

The effect of religious practice on work ethic has been a topic of investigation for many years.  There has been much complaint concerning the “younger generation” concerning their reduced work ethic and tendency to be self-centered.  This complaint probably has been leveled at every generation by their parents and employers…. Read More »

Faith and family are becoming increasingly important in Europe; the countries there are slowly disappearing.  The people are disappearing, taking with them the culture that has defined Europe for millennia.  The cause of this decline is due to a reduction in fertility. Simply put, families are not having enough children… Read More »