The vast universe we now know today is much different from that thought to exist only one-hundred years ago.  At that time, our galaxy was thought to encompass the entirety of the galaxy; there was thought to be very little outside our galaxy.

Through long years of astronomical research, this parochial view of the universe turns out to be laughably inadequate.  The extent of the known universe is much greater.  Many skeptics consider the size of the universe to be an argument against the existence of God.  These skeptics argue,

If God’s goal was to create a habitat for humanity, he would not have made so many useless galaxies, stars, planets, comets, elements, and other components.

If God created the universe as a special place for humanity, he seems to have wasted an awfully large amount of space where humanity will never make an appearance.

Our Solar System is certainly a prerequisite for our existence. … But there does not seem to be any need for all those other galaxies.

Stenger goes on to voice more of the skeptic’s concern noting how insignificant carbon is in the total mass of the universe.  He notes,

Yes, we are supposed to think that God specially designed the universe so it would have the ability to manufacture in stars the carbon needed for life?

Energy is wasted, too.  Of all the energy emitted by the sun, only two photons in a billion are used to warm Earth, the rest radiating uselessly into space.

Visibility of the Universe

Most people take for granted that the night sky is dark and clear, yet it does not have to be that way.  Clarity makes a great difference when it comes to make measurements of astronomical objects and thereby understand the cosmos.  This is one of many factors about the Universe and our local environment that are seemingly predetermined to make observation and understanding possible.

In short, it is remarkable that the characteristics of Earth and the cosmos make it possible for human life but also to make the universe visible and understandable.

If the Universe were any smaller or larger, younger or older, bright or darker, more or less dense, located near more radiation such as a black hole, or near dust pockets the view of the universe would be very limited.  But it is even a greater miracle perhaps that we are all here in the first place.

The Universe is Super-Sized 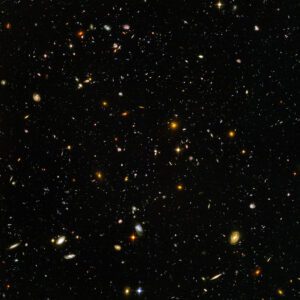 We are living in a rare moment in cosmic history and in an ideal location with the galaxy and the universe, in general, to be able to take measurements and understand the visible universe.  But why is the universe so big – why is it all there to begin with?  Does it not seem all that matter out there – all those other billions upon billions of galaxies are doing nothing for us here on this pale blue dot?

Astronomers got a vision of the vastness of our universe from the Hubble Telescope.  In 2005, the Hubble took a long exposure image (a million seconds or 278 hours) of a small patch of sky no bigger than one-tenth of the Moon’s diameter.  This was called the Hubble Ultra Deep Field view.  From this view, astronomers were able to image all the galaxies (larger than dwarf galaxies) that exist in that field of view, including the first galaxies that formed in the universe.

The Vast Universe is Massive

However, it turns out that for humans to exist on Earth, the Universe needs to be of vast size and the total mass of the Universe is critical to this calculation.

It’s Elemental.  One reason why the Universe must be of the right size and mass relates to its “mass density.”  The density of protons and neutrons in the Universe relates to how much hydrogen fuses into heavier elements during the first few minutes after the Big Bang.  The amount of heavier elements determines whether life will be possible or not – even whether there are certain elements at all!

If the density of protons and neutrons were slightly smaller, then nuclear fusion would proceed less efficiently.  This would mean that the cosmos could never be capable of producing elements such as carbon, nitrogen, oxygen, phosphorus, sodium, and potassium – all elements critical for the formation of life.

On the other hand, if the density of protons and neutrons were slightly larger, then nuclear fusion would proceed more quickly   All the hydrogen in the Universe would quickly form the heaviest elements and there would again not be any of the lighter elements required by life.

It’s Expansive.  Another reason why the Universe must be so massive is due to its need for a certain expansion rate.  The rate of the Universe’s expansion is critically dependent upon its mass density.

With slightly less mass density, the Universe would not form stars like the Sun and planets like the Earth.  The expansion of the universe would have been so great after the Big Bang that gravity would have been able to pull together the gas and dust to form the planets.  Instead, much larger stars would form producing increased amounts of radiation that would incinerate any nearby planets.  Life around any such planets would be impossible due to this radiation and rapid changes in the larger star’s characteristics such as heat, radiation, and luminosity.

With a little greater mass density, the Universe would expand so slowly that all stars would become black holes and neutron stars which are very dangerous to any nearby life.  The radiation and gravity of any planet close to such stars would render them quickly sterile.

Either way, the Universe must be about the size it is today in order for stable planets and stars to form which would be conducive to organic life.

The mass of the universe is simultaneously finely-tuned to produce the right amounts and diversity of life requiring elements and the right expansion rates throughout its cosmic history.  Both of these are required to form the right environment for life to form.  Fine-tuning of these two characteristics which are required for lifer hints at an underlying intelligent design. 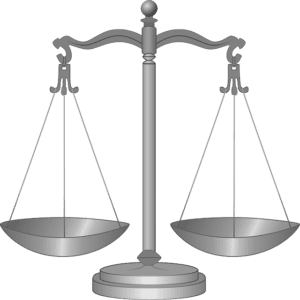 Balance – Image by Clker-Free-Vector-Images from Pixabay

The mass of the stars and planets account for only about one percent of the total mass of the Universe.  Yet that amount (1 percent) must be very tightly balanced for life to exist.

Astronomer Hugh Ross explains in his Book Why The Universe Is the Way It Is,

Picture a huge vehicle … maybe the U.S. Navy’s aircraft carrier the USS John C. Stennis.  Now imagine a tiny fleck of pain from that ship, so small against your hand you can barely see it.  If such a vehicle were compared to the Universe in its earliest moments, removing that speck or adding an entire drop of pain to it would be enough to alter the vehicle’s mass so much as to make it completely useless for transporting passengers.

The Universe consists primarily of “stuff” about which we have little information.  That is one of the most amazing discoveries of cosmology in the last few decades.

There is mater that is considered ordinary – the stuff we are all familiar with, along with dark energy and exotic dark matter.

What proved to be a significant new finding was the amount of stuff we have little knowledge about.  About 72 percent of the total cosmic density is due to dark energy (which has a self-stretching property producing expansion of the universe at an ever-increasing velocity), and another 23 percent consisting of exotic dark matter (particles that only marginally interact with light).

This means that what we see about us along with the stars above us comprises only a tiny fraction of the total matter present in the Universe.

We know the amount of ordinary matter consisting of protons and neutrons because it has to be a certain precise value for the Universe to have produced the kinds and quantities of life-essential elements since the Universe began.

In fact, it turns out that the proportion of ordinary bright matter (consisting of protons and neutrons that form stars) compared to ordinary dark matter (consisting of matter forming the comets, meteors, interstellar gas and dust) must be finely tuned for life.  It turns out that life requires about 5 percent of the ordinary matter to be bright, and that 95% of the ordinary matter to be dark.

One of the most exciting discoveries in the past few decades in cosmology has been that the Universe is expanding at an ever-accelerating rate.  Gravity functions to contract the Universe while dark energy functions to expand it.  As the Universe gets ever bigger, gravity becomes less and less; this reduction in the braking effect of gravity with the expansion of the Universe produces an increasing rate of expansion over time.

The discovery of the expanding universe at an ever-accelerating rate effectively put an end to the Oscillating Universe model.  In this model, the Universe would expand, and then collapse, and then expand, collapse, etc.  This way, the Universe could be an infinite number of years old with multiple recreations.

The dark energy density has to be extremely finely tuned for all of this to happen to produce life at the proper time of the Universe’s age.  If dark energy were changed by as little as one part in 10120, the universe would not be able to support life.  This small number is difficult or even impossible to grasp without comparison.  If compared to the mass of the entire universe, it would be no bigger than a billionth of a trillionth of a trillionth of the mass of a single electron.

It is truly difficult if not impossible to conceive the accuracy required to produce the current Universe.  As astronomer Hugh Ross notes,

Rather than seeing ourselves as insignificant specks in the immensity of the commos, we can consider that immensity an indicator of our worth.  It seems the Creator invested a great deal – a universe of 50 billion trillion stars, plus a hundred times more matter, all fine-tuned to mind-boggling precision – for us.  If not for the strength and abundance of evidence in support of that notion, it would seem the height of arrogance.  Humility demands that we take a deeper and wider look at that evidence.

The accuracy with which the Universe is constructed to a finely tuned precision many orders of magnitude greater than anything humanity in its wildest dreams has accomplished speaks to a Creator, a Designer who has engineered the whole thing – just for us.