The past several years have witnessed a marked increase of Christian persecution in Nigeria. Boko Haram is one Islamic militant group which is an offshoot from Islamic State has publicized the killing of a 22-year-old Christian college student.

Ropvil Daciya Dalep was a biology major attending the University of Maiduguri when he was abducted on January 9 by the Islamic State West Africa Province. This is according to the United Kingdom based Christian Solidarity Worldwide.

The terrorists are seen to be targeting the Plateau People as they executed two carpenters from that state in Nigeria last year.

“The terrorists clear stated why they are targeting Plateau people when the citizens of Plateau have long resolved their differences and are living peacefully together.

This video was occurred only days prior to the execution of pastor Rev. Lawan Andimi who was the chairman of the Christian Association of Nigeria’s chapter in the Michika Local Government Area.

The pastor appeared on a ransom video pleading with church and government authorities to intervene to secure his release from the militants. He was executed because the under served and poor Christian community could not raise sufficient funds to meet the ransom demands of its captors.

Additionally, sources indicate the pastor would not renounce his faith in Christ.

The church did everything within her reach to secure the safe release of this pastor gentleman but it was not possible because they didn’t have the military power to do so.

According to Combating Terrorism Center of the U.S. Military Academy at West Point, estimates suggest there are as many as 6,000 Islamic State militants spread out over nine different cells throughout Africa.

This has produced untold horror in Nigeria where thousands upon thousands have been killed in recent years due to the rise of Islamic extremism and the radicalization of Fulani herdsmen.

Activists have criticized Nigeria’s government for its inability to thwart these attacks and protect the citizens of its country.

Following the killing of Rev. Andimi, the Christian Association of Nigeria released a statement highly critical of the governments slow response to this terrorism.

It is reprehensible and saddening that each time the government comes out to claim the defeat of the insurgency, more killings of our people are committed.

Maintenance of security is the least responsibility of any government that knows its worth. We are again called on President Buhari to purge himself of the allegations of nepotism and religious favoritism by reconstituting the leadership of security outfits.

Nigeria now ranks as the 12th worse country in the world with respect to Christian persecution. Nigeria has been more recently placed for the first time on the US State Department’s Sepcial Watch List for countries with severe issues relating to religious persecution.

The great tragedy of Nigeria’s ineffectual response to Boko Haram and Fulani herdsmen in now parts of Cameroon and those other areas like Burkina Faso are greatly affected. 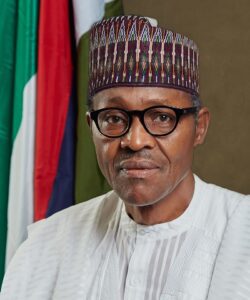 Buhari – President of Nigeria – By Bayo Omoboriowo – This image was made available by Official Photographer of President Muhammadu Buhari, CC BY-SA 4.0, Link

The continued slaughter of Christians in Nigeria has accelerated over the past few years. Estimates suggest that at least 1000 Christians have been killed there by the Islamic insurgents.

Some have wondered whether President Mohammadu Buhari is not colluding with the extremists to exterminate Christians in Nigeria.

The church in Nigeria suggests,

the very questionable leadership of the security sector that has been skewed toward a religion and region.

A government that cannot protect the governed is a failed government.

As long as the government continues to live in denial and fail to face the reality, these criminals will not stop their criminalities. We are almost losing hope in government’s ability to protect Nigerians, especially Christians who have become endangered species under its watch.

US Department of State and Christian Persecution in Nigeria

The increasing anti-Christian violence in Nigeria has provoked a response from the United States government. They note,

It is a dangerous situation in too many parts of Nigeria. The government has either not been willing to or have been ineffective in their response and the violence continues to grow.

Several other groups are calling upon President Trump to appoint a special envoy to monitor the situation in Nigeria and the Lake Chad Region, and to report their findings to the American people.

The worsening violence in Nigeria against the Christian population there is so far largely being ignored by its government. The insurgents are spreading to neighboring countries and will likely broaden the anti-Christian persecution to other areas.

This is a particularly evil time for Christians living in these affected areas as their lives and well-being is continuously threatened by violence of the worst kind.

There has been a marked increase in Christian persecution in Europe.  Hostility and vandalism have increased against the church throughout the entire continent involving churches, Christian schools, and Christian monuments.  In many countries, persecution against Roman Catholic churches and shrines seems particularly intense. Christian Persecution in Europe The Gatestone Institute… Read More »

Leave A Response to "Persecution in Nigeria" Cancel reply