The persecution is increasing from extreme rightwing Hindu nationalism. The Bharatiya Janata Party (BJP) actually encourages the persecution of Christians in India according to reports from those involved. 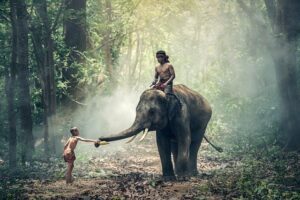 Image by Sasin Tipchai from Pixabay

These new restrictions are encouraging Hindutva extremists to attack Christians which comprise only about 0.25 percent of the 12.5 million people living in the former state.

Persecution of Christians throughout India

Indian Christians have been beaten, murdered, raped at an ever-increasing rate.

One individual case concerned 68-year-old Lakhpati Devi. She is the mother of pastor Kuman Paul. The pastor reported, “My physical body might be weak, but my spirit is very strong, it will not break with persecution,” The Morning Star News further quoted him as saying,

“They tried to kill me twice, I was almost dead, but I still did not die. I will not die until the Lord calls me back home. This assurance drives away all my fears.

ACN is very active in the publication of incidents of Christian persecution in the world and in India. They note this persecution leads to the destruction of churches as well as of individual Christians. They note,

More than 100 churches closed in 2018, because of extremist attacks or intervention by authorities. Not only has communal violence remained high, but the failure of authorities to address attacks on religious minorities has engendered a climate of impunity.

The government is active in the destruction of Christian churches. They demolished a church-run school and hostel in Odisha State in eastern India. This destruction displaced at least 100 students who lived in the hostel.

A Hindu extremist complained to the government that the Christian school was evangelizing the students. This complaint was denied by the headmaster without avail.

Muslims Included along with Christians in the Persecution

The United States Commission on International Religious Freedom reported about 1.9 million non-Hindu residents were stripped from the National Register of Citizens.

Close to two million long-term residents of Assam may soon be deemed stateless. They are being stripped of their citizenship without a fair, transparent, and well-regulated [National Register of Citizens] process. … Worse yet is that Indian political officials have repeatedly conveyed their intent to direct and use the NRC process to isolate and push out Muslims in Assam. And now, across India, political leaders are seeking to expand the NRC and implement different citizenship standards for Muslims altogether.

India has now been included among the top ten nations for the Persecution of Christians in India. Open Doors notes,

Since the current ruling party took power in 2014, attacks have increased and Hindu radicals believe they can attack Christians with no consequence. As a result, Christians have been targeted by Hindu nationalist extremists more and more each year. … The view of the nationalists is that to be Indian is to be Hindu, so any other faith – including Christianity – is considered non-Indian. Additionally, in some regions of the country, converts to Christianity from Hinduism experience extreme persecution, discrimination, and violence.

Since the election of Modi in 2014, Open Doors’ watch list has placed India as the tenth most hostile country to Christians

There have been more than 12,000 attacks against Christians last year. Andy Milligan, the UK director of the Mission India organization notes,

“For some Indian Christians, being a Christian means dying for their faith.

The National Government and Persecution of Christians in India

Many Christian groups voiced concern over the election of Indian Prime Minister Narendra Modi in 2014. They are concerned that the welcome by President Trump would signal an implicit approval of his policies.

Trump has tried to befriend the Indian ruler. In return, Modi described Trump as “warm, friendly, accessible, energetic, and full of wit.”

Other Christian groups were less appreciative of the visit. They are particularly concerned about the rising violence against Christians in India. Christians are concerned the warm welcome may be misconstrued as acceptance of policies.

Open Doors’ CEO David Curry believes most of the blame for increased violence is due to Modi. He notes attacks against Christians in India have increased by 200 percent since Modi took office. Curry claimed,

a clear connection to his ideals and ideology and the rise of religious persecution. His political party and allies have outlined their views, which clearly discriminate against Muslims and Christians.

Other Religious Organizations Concerned about Christians in India

Vijayesh Lal is the director of the Religious Liberty Commission of the Evangelical Fellowship of India. He noted,

Political leaders promote the notion that non-Hindu ideas have no place in their country. … In several places, mobs have threatened Christians with violence and have attacked churches while the police have failed in protecting these same Christians and their property.

Lal notes Modi is silent concerning this increased persecution of Christians in India.  This silence only encourages further persecution of minority religious groups.

Police organizations have been “infiltrated” by those loyal to Hindu extremists. This keeps police from protecting Christians and others from extremist groups.

Trump at the United Nations about Religious Persecution

Trump delivered a speech at the United Nations concerning religious freedom and the persecution of minorities. He listed several instances of this severe persecution throughout the world.

Trump named Franklin Graham as a source of support. At the meeting, Trump was trying to befriend Modi in order to have some influence with the Indian leader.

We can do more by building a relationship, rather than try to be antagonistic. … I think Trump is a great negotiator, and I think he wants to befriend the prime minister so that he can influence him. … This is the way you get things done.

Open Doors’ Curry notes that he is all for trying to have influence with Modi. However,

I don’t think this friendship requires us to overlook the human rights situation in India. In fact, it perhaps gives us more influence and we should us it to help religious minorities in India. If people believe the USA will look the other way on human rights, it will not help the Christians and Muslims in India.

The persecution of Christians in India is a particularly troubling event for many reasons.

It is discouraging to see such persecution of religious minorities in the world’s largest democracy.

The current leader of India, Mr. Modi, has strong nationalistic feelings.  However, conflating Indian nationalism with Hinduism is a troubling turn of events.

The current American administration might be able to have some influence with the Prime Minister.

History of the world shows the persecution of religious minorities due to nationalism never ends well.

The British Foreign Secretary Jeremy Hunt has issued a report indicating the persecution of Christians in parts of the world is reaching “genocide” levels. The report noted that one in three people suffer from religious persecution and that Christians were the most persecuted religious group.  The degree of persecution of… Read More »

Christians are persecuted throughout much of the Islamic world, and so it should not be to much of a surprise that persecution can become extreme in the largest Islamic country – Egypt. On January 5, 2019, an Egyptian police office was killed while trying to defuse a bomb placed in… Read More »

Leave A Response to "Christians in India" Cancel reply