The ancient kingdom of Edom and Israel have a shared history according to Scripture.  The relationship between Biblical Jacob (whose name was changed to Israel and who became the father of the twelve tribes of Israel) and Esau (the brother of Jacob who became the father of the nation of Edom) is legendary.  They were twins and seemingly even struggled prior to birth concerning which would be born first. 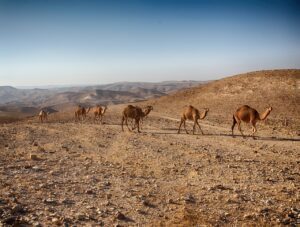 Esau won the birth battle and was born minutes prior to Jacob.  Being first-born, Esau had the birthright as the eldest son and would get a greater portion of an inheritance from his father as well as be head of household and recipient of spiritual blessings God made to their fathers.  The two brothers struggled throughout their youth; Jacob was the favorite of his mother while Esau was the favorite of his father, Isaac.

Esau was a skilled hunter and had just returned from a hunting expedition and was very hungry for a hot meal.  Esau carelessly traded Jacob his birthright for a bowl of porridge during this period of hunger, forever forfeiting his right as the firstborn.  Eventually, Esau would abandon his Hebrew heritage and marry pagan women outside his Jewish heritage further demonstrating his careless attitude.

Interestingly, each man experienced a name change connected to their identity and values.  Esau was born with reddish hair and complexion and confirmed his primary allegiance to the temporal and superficial when trading his heritage for a bowel of red-colored lentils.  Esau and his progeny were identified with this red color and were called Edomites – a word meaning “red.”

Similarly, Jacob was named for an incident at birth when he clasped the heel of his brother as he seemingly tried to be born first.  His name means “supplanter” or “deceiver” (Genesis 27:36).  His moniker was justified when he persuaded his brother to exchange his birthright with its immeasurable value, for a simple bowl of lentils.  Later in life, Jacob would come to seek God and he was renamed “Israel” meaning “God strives.”  His new name portrayed him as a man of God and a steward of God’s covenants and promises.

It would be through him that the nation of Israel would arise.

The Problem with Edom, Jacob, and Esau

All of this makes for a good story – a fictional story according to liberal scholars.

Scripture portrays the ancient kingdom of Edom as an early developed nation in the southwest of the Promised Lane.  There was an Edomite confederacy complete with kings and chiefs (Genesis 36:31).

By the time of Exodus about 1450 BC, the Edomite Kingdom was in place – and was decidedly unfriendly to Israel.  During Israel’s 40-year sojourn in the desert traveling from Egypt to Canaan, the King of Edom refuses to let Israel pass through their land,

Moses sent messengers from Kadesh to the king of Edom: “Thus says your brother Israel: You know all the headship that we have met: how our fathers went down to Egypt, and we lived in Egypt a long time.  And the Egyptians dealt harshly with us and our fathers … Please let us pass through your land … But he said, “you shall not pass through.”  And Edom came out against them with a large army and with a strong force.  Thus Edom refused to give Israel passage through his territory, so Israel turned away from him.  (Numbers 20:14-21).

The fact that Edom was able to resist the large forces of Israel suggests they were a large and powerful nation.  Subsequent history shows Edom and Israel frequently to be at war.  Edom even fought with Babylon against Israel when Jerusalem was captured and Israel was led into captivity.

The Biblical picture of the powerful nation of Edom contrasts starkly with the assessment of modern critics.  Minimalist scholars who see little of historical value in the Bible argue that no evidence for the early Edomite Kingdom exists.  They dismiss the entire Biblical narrative of the Exodus including battles with a powerful Edomite Kingdon as being a myth.

The view of liberal scholars has been that Edom never matured above the level of a tribal confederacy of small local leaders and never formed a strong independent kingdom.

This was the situation until recently when an article was published in a peer-reviewed journal PLOS ONE.  This article proposed the existence of an ancient Edomite Kingdom noting that, 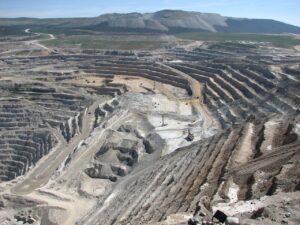 Recent archaeological research in the Wadi Arabah, one of the largest copper ore resource zones in the Levant, allowed for investigating in unprecedented detail a continuous record of technological development.

The authors identified early Edomite involvement in copper mining in an area near the southern border of modern-day Israel and Jordan.  This study confirms the early sophistication and organizational ability of the Edom that is consistent with its Biblical portrayal.

The area produced copper for around 500 years which produced a large amount of discarded waste.  The researchers were able to go through these mounds of evidence and piece together how technological advancement occurred in this area in the Levant.

Important in their analysis was the carbon dating of spent charcoal rescued from the waste material.  As the Edomites improvement their copper extraction techniques, they were able to extract large amounts of copper from the ore.  The researchers were able to conclude,

While the biblical narrative describes an early, pre-10th-century kingdom … the archaeological record has been subjected to conflicting interpretations, even after the publication of the new chronology that clearly demonstrates the flourishing of the region during the 12th – 11th centuries.  Here, the striking synchronous agreement between the technology in Timna and Faynan, evident as early as the 11th century BCE … suggests that an overarching political body existed in the region already at this time.

Liberal archaeologists have asserted the Biblical narrative is largely mythological, made up by Jewish historians perhaps in the 6th century BC, long after the alleged events were said to have occurred.  As a part of the alleged historical, the historians conjured up civilizations that never existed – at least not in the form portrayed in Scripture.

The Edomites are one such group that liberal archaeologists allege never existed as a mighty, united nation that could repel a large group like the Israelites wandering in the wilderness.  At best, Edom was a loosely knit federation of local tribes that would hardly fit the definition of organized civilization.

This historical narrative has now been overthrown.  The recent archaeological studies of the copper mines in the Wadi Arabah identify a sophisticated copper production industry from 1300 to 800 BC.  These copper mines are now identified with the ancient kingdom of Edom from the Old Testament.

These findings corroborate the Biblical narrative of a sophisticated Edomite civilization – one which might be organized and mighty enough to repel the wandering Jews producing conflict that would last centuries.

Leave A Response to "Ancient Kingdom of Edom" Cancel reply