The recent discovery of the destruction of Gath confirms the Biblical historicity of the period.  It is important because it is yet demonstration of how modern archaeology is confirming the Biblical narrative. 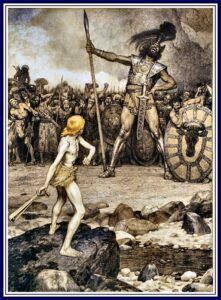 David and Goliath – By Osmar Schindler (1869-1927) – http://www.bcpublicrecord.com/?attachment_id=10222, Public Domain, LinkOne of the most defining stories in the Old Testament describes the confrontation between the young shepherd boy David and the giant warrior Goliath.  It became the archetypal representation of a hopeless cause winning against overwhelming odds.  It also demonstrates how God can radically intervene to change the course of history.  This intervention would later lead to the destruction of Gath, Goliath’s home city. 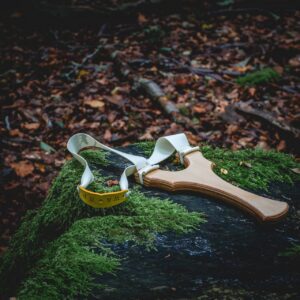 The mighty warrior Gath was one of five brothers who had come out to defeat the overwhelmed Israeli army.  Saul, the King of Israel, was despondent because it appeared all hope was lost as there was clearly nobody in his army who stood a chance in defeating Goliath in the natural.  Goliath yells curses at David and God, but the young shepherd boy is unperturbed.  David believes God will fight for Israel and, with his skill honed by years of protecting his flock from aggressive animals, hurls a stone at his formidable opponent.  The stone strikes Goliath square in the forehead, apparently knocking him unconscious.

David then recognizes his golden opportunity and, with Goliath’s own sword, cuts of Goliath’s head and claims victory of the heathen Philistines.  The Israeli army then charges at the demoralized Philistines, and the victory is theirs.

While this is a great story in its own right showing the eventual triumph of good against evil, right against might, or godliness against sinfulness, its historicity likely can never be proven, although some of the factual claims presented in the epochal story can.

Archaeology once again supports the narrative with the discovery of the ancient city of Gath, its huge stone structures consistent with a city of “giants,” and the manner of destruction suffered by its wall. Additionally, new archaeological findings show Syria destroyed the wall surrounding the great city of Gath in a manner consistent with its being breached by an invading force supporting Biblical history.

The importance of this archaeological finding can hardly be overstated.

There have been archaeological digs at this site for many years, but new findings have radically changed our understanding of what happened at Gath in ancient Israel.  Gath was one of the largest Philistine cities in the Levant and was famous for being the city of giants – even in ancient times.

The recent findings show the large-scale destruction of a kind rarely seen in any ancient dig. The date of this destruction places it within the reign of Syria’s King Hazael.  Although his name is not recognizable to most modern Bible students, he turns out to be very important to the ancient citizens living in Gath.  This king is mentioned in 2 Kings 12:17 as a ruthless invader intent on reaping the treasures within the cities he conquered rather than establishing an empire.

Archaeologists have not been able to get a clear picture of what happened to the ancient city and why it fell until very recently.  But in the 2021 excavation season, archaeologists made further discoveries that fundamentally changed their perspective and provided answers to what happened to this once great city.   These new conclusions resulted from the long, arduous earlier seasons of digging out the entire city to demonstrate what actually happened several thousand years ago.

What Happened to the City of Gath

The exciting finding that changed history was a nearly 30-foot-long break in the city’s massive fortification system.  As noted below in the YouTube video, the stones used in these fortifications were massive, and toppling these rocks would have required considerable effort from a determined foe.  The gap in the Gath fortifications probably represented the gateway through which the invading Syrian army breached the Philistine city.

The Kindom of Aram Damascus 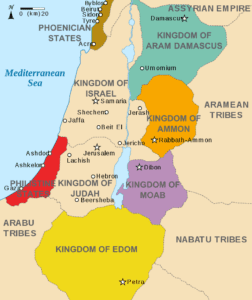 Some civilizations come and go in quick succession, never to be heard from again.  Others were dominant in world history for many hundreds of years until they finally fell. For example, Syria rose to great prominence during the Iron Age ii (1000 – 586 BC).  Through these centuries, Damascus was either allied with or fighting its southern neighbors, especially Israel and Judah, and the Philistine cities such as Gath.

Recent excavations have uncovered the ancient gates leading into the city of Gath.  These city gates were enormous, which along with the large hewn stones used in the wall’s construction, are consistent with a large statured population.

King Hazael (842 – 796 BC) was a formidable opponent who controlled a large army that expanded its territory southward, creating a small empire.  It was never strong enough to offer any real danger for the larger kingdom of Babylon (that was a much greater threat to Jerusalem), but it was a potent enough force to destroy many cities.  Archaeologists believe Gath fell most horrifically to Damascus about 830 BC.  Nation-states in that time period were not interested in expanding their territory to get more land; they were interested in the wealth each city contained.

Soldiers paid themselves from the booty they acquired when they invaded a city.  The invading army took everything of any value, so there was little need for the population.  While some larger states such as Greece and Rome might take prisoners and make them slaves or concubines, smaller states like Syria did not need this excess population.  Looking only for treasure meant the invading army would kill every man, woman, and child upon entering a populated city.

The Scriptures spend very little time discussing the destruction of Gath, but the archaeological evidence paints an incredibly destructive event.  The researchers have found abundant evidence of Hazael’s siege include burned buildings and a siege trench. But, much more disturbingly, they found many remains of the defeated population still present among the wreckage.

The Syrian invasion led to the destruction of Gath, which fundamentally altered the political environment of the Levant for the next few centuries.

Jerusalem Next after the Destruction of Gath

Scripture indicates Syria set its sights upon a much larger treasure trove in Jerusalem just to the north of Gath.  It is likely that the population of that city was horrified at their potential destruction by the destroying army and begged their ruler to do anything possible to avoid a war.

The King of Judah offered to give Hazael the treasures in the city if he would go away.  Frequently, an invading would offer the encircled city an opportunity for surrender before starting a siege. If the city surrendered, invading force might spare the population; otherwise, the invaders would kill the population after they conquered the city.

The army had much to gain from this tactic to avoid conflict while attaining much the same goal.

Joash was the ruler of Judah at that time and offered all of Jerusalem’s treasure, including everything from the sacred Temple.  Scripture notes,

Hazael, king of Aram, marched up and fought against Gath and captured it at that time.  Then he decided to attack Jerusalem.  So King Joash of Judah took all the sacred objects dedicated by his fathers – Jehoshaphat, Jehoram, and Ahaziah, and kinds of Judah – along with his own consecrated items and all the gold found in the treasuries of the house of the Lord and the royal palace, and he sent them to Hazael king of Aram.  So Hazael withdrew from Jerusalem.

Huge Stones in the City of Giants 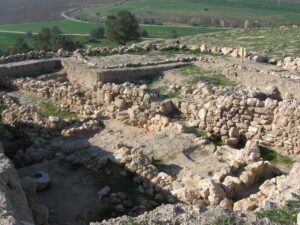 By Ori~ – Own work, Attribution, Link

One of the more interesting archaeological findings in the destroyed city of Gath is the huge stones used in the initial construction of the city.  These stones are apparently much larger than the usual stones used during the construction of cities. Furthermore, these huge stones show evidence of being chiseled to fit together with other stones of similar nature to produce a more solid obstruction to an invading force.

While ultimately, this did not stop the invading army of Syria, it would seem natural that a city of giants would be able to use larger stones to construct its fortifications.

Several hundred years before the destruction of Israel, Moses sent spies into the Levant to ascertain how difficult their invasion would be.  Ten of these spies returned with the horrifying story of there being “giants in the land,”

The land, through which we have gone to spy it out, is a land that devours its inhabitants, and all the people that we saw in it are of great height.  And there we saw the Nephilim (the sons of Anak, and came from the Nephilim), and we seemed as ourselves like grasshoppers, and so we seemed to them.  (Numbers 13:32-33).

Some have suggested that the spies’ report on the “giants in the land” was exaggerated.  While it is possible that the inhabitants were not actually “giants” but just big and powerful, Moses seems to add credence to their claims.  Moses confirms the spies’ account in Deuteronomy 9:1-2, where he encourages the population to cross the Jordan to

dispossess nations greater and mightier than you, cities great and fortified up to heaven, a people great and tall, the sons of the Anakim, whom you know, and whom you have heard it said, ‘Who can stand before the sons of Anak?’

The “Anakim” were sons of Anak, who had three sons named Shshai, Ahiman, and Talmai (Joshua 15:14, Judges 1:10, 20).  Joshua tried to destroy the Anakim, leaving them in Gaza, Gath, and Ashdod (Joshua 11:21-22).  We then learn that Goliath was from Gath, suggesting he might have been a descend of Anak.

Caleb was more successful than most in dispossessing the land of the Anakim.  Caleb drove the Anakim from Hebron (Joshua 14:12, 15:14, Judges 1:20).  Hebron was first named Kiriath-Arba, named after Arba was “was the greatest man among the Anakim.” (Joshua 14:15).

Summary of the Destruction of Gath

The recent archaeological discovery of a city destroyed by an invading army once again substantiates the Biblical narrative.  These findings even show how soldiers penetrated the wall of Gath with a thirty-foot hole along with siege tunnels over a mile long.  Siege tunnels were underground tunnels dug to get under the city walls while protecting the invaders from rock and arrows slung at them.

The combination of a superior army force and the benefit of time would eventually lead to the destruction of Gath with the slaughter of every man, woman, and child.  The Syrians were after gold and silver, not slaves.

Archaeology once again substantiates some Biblical details about an obscure Philistine city, including finding consistent with the Biblical narrative of its destruction.  The ruthless ruler of Damascus came plowing through the Levant with a destructive force that would forever shape the region’s landscape.

Fortunately, Jerusalem escaped destruction from an invading army, although at a high cost of all its treasures and sacred objects located in the Temple. Nevertheless, it was a perilous time in which to live. The Babylonians would eventually destroy the faithless inhabitants of Jerusalem and the city leveled by another invading army centuries later.

Leave A Response to "The Destruction of Gath" Cancel reply