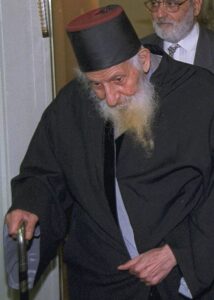 One of the most remarkable – and controversial – news stories out of Israel concerns the renowned Ultra-Orthodox teacher of Israel – Yitzhak Kaduri.

He was apparently a remarkable man revered by Jews all throughout Israel as a man of God and was a rabbi’s rabbi.

He was born on July 9, 1898, in Baghdad as Yitzhak Diba who studied the Torah and the Kaballah, and was considered very intelligent.  He memorized much of the Scriptures and texts and was able to give advice to those who would ask.

Everybody who knew the rabbi recognized him as a great man who had received a revelation from God.  The rabbi many recognized as the most important rabbi in Israel said,

I have seen the Messiah! And I know who He is – I know His name.  I know where He is.  I know when He is coming.  Furthermore, you will know these things as well – one year after my death.

Kaduri’s life spanned the entirety of the twentieth century.  He moved to Israel before it gained its independence in 1948, and he lived to see many of the horrors the Jews faced during this turbulent century.  Kaduri saw the rise of the Muslim Brotherhood, the reign of Hitler and the concentration death camps, the atrocities of World War Two, and multiple wars launched against Israel by its neighbors.

He was also known for his displays of mercy, ministry, and life of simplicity – he was the Jewish male version of Mother Teresa.

That year had passed – it was time to reveal the note which had been kept under lock and key. 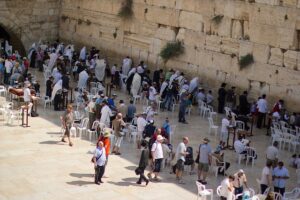 The Wailing Wall – Image by David Mark from Pixabay

The contents of the note stunned the world – and particularly startled the Orthodox Jews of Israel.  Most of the world would refuse to print the message as it was so shocking many refused to believe it could be genuine.

The note’s message was particularly cryptic and quite frankly, embarrassing to many, and even considered blasphemous.  There was such an uproar throughout Israel that the article was pulled a few months after it was published.

But it was too late.  The message had been published throughout the world, reverberating throughout churches, mosques, and synagogues.  Copies of the note where shared thousands of times across the Internet.

The original Internet article was finally restored on May 30, 2013.  Kaduri’s message also related the soon return of the Messiah – very soon.  The message of the very soon coming of the Messiah is believed by many prominent Orthodox Jews in Israel – so much so that many are afraid to leave Israel.

The Messianic fervor is shared among three of the world’s great religions – Christianity, Judaism, and Islam.  They all believe a Messiah is coming soon and so are particularly interested in the content of the message.  Millions throughout the world are anxiously anticipating the return of the Messiah in light of the note and recent world events.

The news that Kaduri named Yeshua as the Messiah was not taken well.  Many believed that the old rabbi became delusional, perhaps senile.  But those who knew him understood Kaduri maintained full control of his mental faculties.

Others said the old rabbi never wrote the note that was attributed to him – it was a hoax.  Others said the note was genuine as it had been kept under lock and key after his death.

The Life of Yitzhak Kaduri

Kasduri was born into a family of spice traders in Iraq.  He was recognized early in life as being a Torah prodigy.  Apparently when he was sixteen years old, he received a blessing of “long life” from the most important Sephardic rabbi of his time, Rabbi Yosef Chaim.  Shortly after, he moved permanently to Jerusalem.

He was intensely interested in the mysteries of the Torah and was busy teaching others who were also interested.  He refused to take money for this instruction, but earned a salary as a translator for the British Army, and then later as a bookbinder.

Yom Kippur is a particularly holy day on the Jewish calendar.  The day is observed with much personal sacrifice and focus on the Word of God by Orthodox Jews throughout the world, but particularly in Israel.  The Book of Leviticus strictly prohibits work on this day and insists on personal reflection on the tenth day of the seventh month of the Jewish month of Tishrei.

Rabbi Yitshak Kaduri’s congregation had been faithful and his synagogue was packed with a standing-room-only crowd to hear the renowned rabbi.  Not a single person wore anything made of gold which would be considered a sacrilege.   Gold would be an unholy reminder of the sins associated with the ancient golden calf worship by the Jews’ ancient ancestors in the wilderness.  Women wore white to symbolize their purity after forgiveness of sins associated with the holy day.

The Rabbi had been praying by himself for about forty-five minutes, trying to gather his thoughts and made a momentous announcement to the congregation.  He then lifted his head and said,

I have met the Messiah.

The people gasped – such an unusual, astounding pronouncement.  It would have been sacrilege was it not the most revered rabbi in Israel at the podium.  He then continued,

I have met the Messiah … He has appeared to me in a vision.  He has attached his soul to a particular person in Israel.  I will spend this day teaching you how to recognize the Messiah, for He shall appear soon.  You must be ready for His coming.  Many events of awe will take place before His coming … but they will happen quickly.

All eyes were on the ancient rabbi – not a word was spoken.

I must tell you something disturbing.  I have no specific information to give you on the following matter other than what I am about to share with you now … The Messiah has revealed to me that He will not present Himself until after the death of our prime minister Ariel Sharon.

The Prime Minister of Israel was a controversial person but many revered him as the “Lion of Israel.”  On January 4, 2006 Ariel Sharon suffers a massive stroke and lapses into a coma.  Twenty four days later, Rabbi Kaduri dies after a brief episode of pneumonia.

Kaduri’s final wishes are carried out and the handwritten note penned by Kaduri and sealed for a year is opened.

The note reveals the name of the Messiah as Yehoshua, the Hebrew form of the Latin name of Jesus.

Needless to say, this caused tremendous confusion among his followers, some of whom thought that somehow the note was confused, a trick, or a forgery.  But this does not seem possible as the note was kept securely in a safe until it was revealed one year after Kaduri’s death.

There was much anticipation of the timing of Messiah appearance among the Jewish population of Jerusalem in the early part of the first century AD.  This anticipation related to the expected appearance of the Messiah who they hoped would lead a revolt against the hated Roman occupiers of their country…. Read More »

Ruth is a small book buried in the Old Testament. It consists of only about 2500 words but it conveys a great picture of a redeemer.  As part of the redeemer image, Ruth was adopted into the lineage of the great redeemer, Christ. This book is particularly useful for those… Read More »

Jubilee – The Measuring Line
The Jubilee