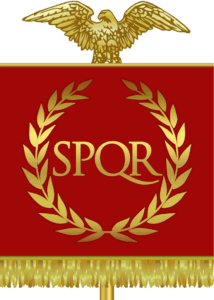 Flag of Roman Empire – By Ssolbergj – The vexilloid of the Roman Empire was a red banner with the letters SPQR in Gold surrounded by a gold wreath hung on a military standard topped by a Roman eagle or an image of the goddess Victoria made of silver or bronze.[1][2][3][4], CC BY 3.0, Link

There was much anticipation of the timing of Messiah appearance among the Jewish population of Jerusalem in the early part of the first century AD.  This anticipation related to the expected appearance of the Messiah who they hoped would lead a revolt against the hated Roman occupiers of their country.

Ancient rabbinical deliberations expressed in the Talmud placed his expected appearance in the early first century which represents a problem to many Jewish faithful.  Some believe the Messiah may have come but because of Jewish unfaithfulness did not declare himself to the nation.  Others suggested in hushed tones that maybe God made a promise – and then broke it.

A Messiah who never comes to lead his people out of bondage to the Romans is unfortunate, but a God who breaks promises is tragic.

But most Jews today – even those living in Israel – are secular.  The Messiah for them is a Jewish version of Santa or Superman.  It would have been nice for the Messiah to be a real figure, but secular Jews smugly believe he must have been just a fable.  The Jewish world was waiting for him 2000 years ago but he did not show up because he does not exist.

Many Jews pay little attention to the Book of Daniel.  A young Jew, Rachmiel Frydland, wrote a book discussing Daniel 9 which predicts the time of the Messiah’s appearance.  He writes,

The Jewish people rarely study the Book of Daniel because many rabbinic Jews were misled attempting to interpret Daniel’s cryptic “times.”  some were led so far astray that they came to believe in false messiahs, and therefore Talmudic Jews frowned on students who studied Daniel with a view of finding out the time of the Messiah: However, religious Jews know that this book revealed more about Messiah than any other book.

The Timing of the Messiah’s Appearance 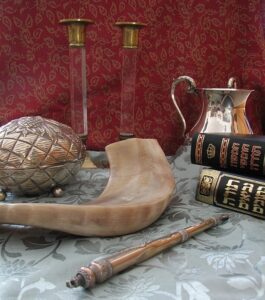 Judaica – By The original uploader was Gilabrand at English Wikipedia. – Originally from en.wikipedia; description page is/was here., CC BY 2.5, Link

The Book of Daniel gives precise prediction as to when the Messiah would appear as noted in the Jews for Jesus site.  The prophet lived during the time of Jewish exile in Babylon and later in Persia – his tomb can be visited today.  As recorded in the Book of Daniel, he received a vision that the Messiah would come 483 years after the command to restore Jerusalem and rebuild the Temple.

…that from the going forth of the command to restore and build Jerusalem until Messiah the Prince, there shall be seven weeks, and sixty-two weeks, the street shall be built again, and the wall, even in troublesome time.  (Daniel 9:16).

The Babylonian Jews must have chuckled to themselves at this prophecy because they were slaves in Babylon whose ruthless ruler had no desire to let anyone leave much less to rebuild an enemy city.

But then Babylon was conquered by Persia and eventually a Persian king decided to do just that.  History shows Artaxerxes issued a decree in 444 BC for the Jews to leave and rebuild the city and its Temple.  History shows that before the 483 years was up, Christ appeared.

History also shows there was not anybody else who claimed to be the Messiah during that time period.

The Second Temple and Importance to Messiah Timing 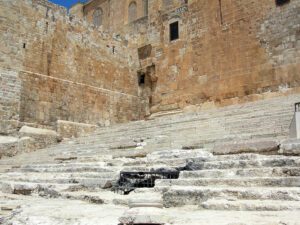 Stairs of Ascent at Jewish Temple – By Wilson44691 – Own work, Public Domain, Link

The people of the prince who is to come shall destroy the city and the sanctuary.

This happened when the Roman legions came to Jerusalem to quell a Jewish rebellion.  They destroyed both the city of Jerusalem and the Temple.

The ancient Jews recognized the Temple would be standing when the Messiah came.  They felt that Psalm 118 would be sung to the Messiah when he arrived,

Lord, save us! Lord, grand us success!  Blessed is he who comes in the name of the Lord.  From the house of the Lord we bless you.

Clearly, the only way the Jewish people could bless the Messiah from the house of the Lord was if the Temple was still standing.

Then suddenly the Lord you are seeking will come to his Temple; the messenger of the covenant, whom you desire, will come (3:1).

The Lord, the angel of the covenant, is the Messiah.

Daniel believed the Temple would be standing at the time of the Messiah’s appearance, but that it would then be destroyed.  The second Temple – the one that was originally built by Ezra and extended by Herod the Great, was where Christ did much of his ministry.

Christ said regarding the Temple,

These things which you see – the days will come in which not one stone shall be left here upon another that shall not be thrown down.

Less than 40 years after Christ’s statement, the Temple was completely destroyed by Roman legions exacting revenge upon the rebelling Jewish population.

Importance of Temple to Claims of a Messiah

The coming of the Messiah had to be during the time declared by Daniel – 483 Jewish prophetic years after the declaration by Artaxerxes in 444 BC.

The scepter shall not depart from Judah, nor a lawgiver from between his feet, until Shiloh comes; and to Him shall be the obedience of the people.

Both Luke and Matthew give the record of Jesus’ family tree which was accessible before the Temple’s destruction.  They both identify Christ as from the house of David.

There was nobody else who lived at the time who claimed to be the Messiah who could verify his lineage from Dave.

The Messiah had to be “Cut Off” – or Die

The Daniel prophecy also indicates that the Messiah had to die after 483 years.  Some of the Talmudic rabbis state,

in Daniel is delivered to us the end [the time of his appearance and death – Rabbi Jarchi] of the Messiah.

The notion that the Messiah would have to die is not restricted to ancient rabbis, however.  Isaiah wrote of the one who would suffer and die for the sins of the people,

For He was cut off from the land of the living; For the transgressions of My people He was stricken. (Isaiah 53:8).

Psalm 22 goes on to describe a crucifixion – a type of execution that would be invented by the Romans to torture criminals and deter criminal behavior.  This Psalm was written hundreds of years before the appearance of Christ – and before crucifixion was even invented.

The Old Testament is clear regarding the identity of the Messiah who would save his people.  He would be recognized at a certain time interval between 33 AD and 70 AD when the Temple was destroyed, the Messiah would himself be killed.  The Messiah also needed to be a direct descendant of King David which had to be proven through genealogical records.

There has been significant growth of Messianic Judaism in recent years.  The first congregations were established in 1967 and there are now about 800 throughout the world.  Joel Chernoff is the CEO of Messianic Jewish Alliance of America believes there are now more than one million messianic Jews – Jews who believe Jesus is the Messiah.

The significant of Jews coming to Christ can not be overstated.

Ruth is a small book buried in the Old Testament. It consists of only about 2500 words but it conveys a great picture of a redeemer.  As part of the redeemer image, Ruth was adopted into the lineage of the great redeemer, Christ. This book is particularly useful for those… Read More »

Leave A Response to "Timing of Messiah Appearance" Cancel reply