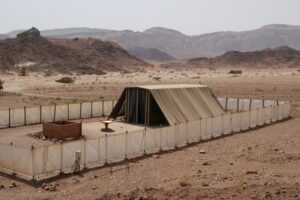 Evidence for the Tabernacle found in Shiloh in Israel.  The Tabernacle was used as the home of the Ark of the Covenant until the construction of the First Temple by Solomon. For many years, it was the center of worship in Israel and served as the capital until the time of David when Jerusalem was conquered.

Archaeologist Dr. Scott Stripling believes he might have found the actual last location of the Tabernacle – a remarkable feat if it can be proven true. He has been excavating at a site in ancient Shiloh and has found remnants of the supporting structure of the Tabernacle.

Much of the original structure was animal skins which would have decomposed many centuries ago. However, other parts were composed of my durable material which could still be found today.

A trio of rare altar horns on stone blocks are among the most recent findings at this site. These are of a structure that would have been used in the original Tabernacle. These three horns may have been on the corners of an altar that was used, and come from the general era of the Iron Age.

These horns, along with other acquired artifacts, provide some credence to his discovery as being the actual ancient Tabernacle. The structure itself is described in detail in Scripture and so the current structure can be compared to the original specifications.

Discovery of Tabernacle Artifacts At Shiloh

We began with a hypothesis: We have the ancient text that says that this was an ancient Israelite cultic center, and then we begin to see if we have verisimilitude. Does the material culture match what we read in the text?

I mean, we were never expecting to find the mishkain [the Tabernacle]; it was made of animal skins, it would have decomposed. But the supporting material culture I do believe we’re seeing in the excavation”

According to the Talmud – ancient Jewish history – the Ark of the Covenant was at Shiloh in the Tabernacle for 369 years.

Original Goals of the Expedition 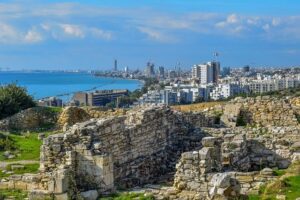 An archaeological site – Image by Dimitris Vetsikas from Pixabay

Stripling notes that the original goal for his excavations at Shiloh was to determine whether there was a gradual emergence of Jewish culture from the ancient Canaanite culture. Stripling believes that the Israelites arrived in the Land of Israel with Joshua about 1400 BC – timing that is controversial but in agreement with Scripture.

Other archaeologists believe the conquering of Israel occurred nearly two centuries later in 1250 BC.

Stripling established activity at Shiloh through the discovery of the altar horns which he says was verified by outside expert opinions. One of the outside experts is Shimon Gibson, who is currently working at Jerusalem’s Mount Zion research expedition.

The Scriptures report that none of the stones used in the Tabernacle were forged by a mason but were rather found in the particular shape needed. Those discovered at Shiloh are of the size and shape that would have been used for the altar horns. 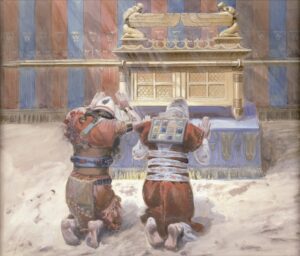 A similar platform is also being excavated by Tel Aviv University Prof. Israel Finkelstein at biblical Kiriath-Jearim which was the home of the Ark of the Covenant until brought to Jerusalem by King David.

Stripling notes he intends to do an additional excavation of the platform in order to better determine its structure. He notes,

We even expect it to be similar to the biblical dimensions because the Bible is very specific on the size of the tabernacle and the inner court and the outer court. We don’t have proof of that yet but we do have a monumental building from the period of the mishkan, that oriented east-west, which is what the Bible says, that we’re in the process of excavation,

The altar horns and pomegranate sculptures were found on the northern slope of a hill, east-west facing as in Scriptures.

Getting to the Bony Details in the Tabernacle found at Shiloh

Part of the excavations evaluated bone remnants which were found in great numbers near the proposed Tabernacle structure. Stripling notes,

Prior to Jerusalem, it was all about Shiloh, so this was Israel’s first capital. Jerusalem remained in Jebusite or Canaanite hands for hundreds of years, whereas Joshua sets up the mishkan at Shiloh. And so we’re very interested in seeing the transition from say the Amorite/Canaanite culture into the Israelite culture. Is it measurable scientifically in some way?

Bone deposits are found that are overwhelmingly made of animals used in the biblical sacrificial system.  Less than one percent of the bones are identified as pig bones in the Israelite strata while in deeper strata there are four percent pig bones. 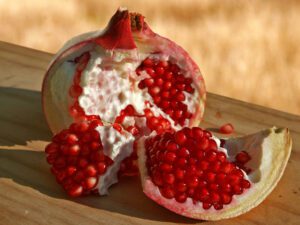 Additionally, the archaeologist has found a series of storage structures around the Tabernacle site which would have been where the offerings were kept. Stripling notes,”

No other site in Israel has that.  If we’re assuming there was a sacrificial system there… well, what do you bring if you’re going to bring your tithe? You can’t make a secure online donation at Tabernacle.org; you can’t write a check. What are you going to do? You’re going to bring commodities. Barley, figs, pomegranates. And so what do we find? Storage rooms around the entire perimeter.

The archaeologist also notes that these storage facilities also include organic matter. The most important of the seeds found in this matter are those from the pomegranate because only the pomegranate goes into the Holy of Holies where the Ark of the Covenant was kept.

Interestingly, Shipley is using the same sifting technique that is used in the Temple Mount Sifting Project to find very small artifacts that might otherwise have been missed. He notes this sifting technique has been perfected at the Sifting Project where mounds of discarded material illegally dumped from the Temple Mount are being carefully analyzed.

Tabernacle Found at Shiloh by The Preacher Archaeologist

Dr. Shipley is also a pastor affiliated with The Bible Seminary in Katy, Texas. He is also the provost and professor of Bible Archaeology and Church History.

While controversial, he has found that the use of Scriptures to inform his archaeological studies has proven very effective. he notes that the Bible

informs what I am doing and for me personally it’s very meaningful when we’re finding material remains, but I’m very capable of bifurcating my beliefs from what we’re finding. We’re not trying to read something into the evidence that’s not there.

He goes on to say,

The science is what the science is. But for me personally as a Christian — of course our roots are in Judaism so it’s the same scriptures that we’re sharing — it’s very meaningful and sometimes I just have to stop and remind myself where I am. And one of my favorite verses from the Hebrew Bible is Psalm 102:14, ‘Blessed are those who love your dust and cherish your stones.’

The historicity of Scriptures is being proven with recent archaeological excavations in Israel. These findings have shown the historicity of David, Pilate, Isaiah, as well as many other Biblical characters.

It is unexpected that the actual Tabernacle might actually be located given it was made largely of animal skins which would have long since decomposed. The more durable structural artifacts from the Tabernacle could have survived the centuries and is appears are being located in their proper location – the Biblical city of Shiloh.

Another amazing archaeological discovery has been made in Israel helping to confirm the historicity of the Bible. There have been many similar discoveries made in recent years, everything from seals belonging to Isaiah, jailors of Jeremiah, the Pontius Pilate ring, and a clay impression made for Jezebel. The newest addition… Read More »

One of the most exciting archaeological discoveries in recent years concerns the recovery of an 8th century BC seal impression discovered in the First Temple remains near Jerusalem’s Temple Mount.  Hebrew University archaeologist Dr. Eilat Mazar notes, We appear to have discovered a seal impression, which may belong to the… Read More »

« Timing of Messiah Appearance
The David and Goliath Story »

Leave A Response to "Tabernacle Found at Shiloh" Cancel reply