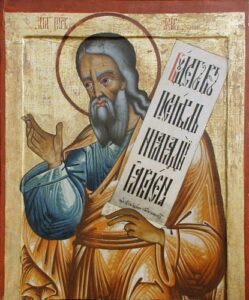 The seal of Prophet Isaiah shows the historicity of one of the most important prophets in the Hebrew Bible.  He foretold Christ’s birth and many aspects of his ministry.

One of the most exciting archaeological discoveries in recent years concerns the recovery of an 8th century BC seal impression discovered in the First Temple remains near Jerusalem’s Temple Mount.  Hebrew University archaeologist Dr. Eilat Mazar notes,

We appear to have discovered a seal impression, which may belong to the prophet Isaiah, in a scientific, archaeological excavation.

The discovery was made at an excavation site called the “Ophel” which is located at the foot of the southern wall of the Temple Mount in Jerusalem.  It is important to the scientific community for these artifacts to have been found in an archaeological site as this gives the artifact archaeological context and ensures the artifact is legitimate and not a clever modern reproduction.

These findings were originally published in the prestigious journal Biblical Archaeology Review.

The tiny clay impression is inscribed with letters and what appears to be a grazing doe which is a “motif of blessing and protection found in Juday, particularly in Jerusalem.

Unfortunately, the entire bulla is not intact but uses ancient Hebrew letters common during the First Temple Hebrew spelling out the name “l’Yesha’yah[u] or “belonging to Isaiah.  What is even more remarkable is the spelling below his signature with the partial word “nvy” which presumably spells out “prophet.”

Interestingly, this bulla was found near another bulla bearing King Hezekiah’s name as Hezekiah and Isaiah are mentioned together in the Bible.  These two bullae were found in the same archaeological layer and only one-meter distance from each other.  Mazar notes,

Mazar notes that there is still some doubt as to whether the bulla really belonged to the biblical prophet given the seal is broken.  But she also notes,

Finding this bulla leads us to consider the personality and the proximity of the prophet Isaiah as one of the closest advisors to King Hezekiah – not only with regard to the events of his time, but also in assessing them from an informed perspective and foreseeing their influence over future events.

King Hezekiah was one of ancient Israel’s greatest kings.  The Bible notes the importance of Hezekiah,

He trusted in the Lord God of Israel; so that after him was none like him among all the Kings of Judah, nor any that were before him. (2 Kings 18:5)

Scripture makes clear that the secret of Hezekiah’s greatness was his association with the prophet Isaiah.  There are 15 instances in the Bible where King Hezekiah and Isaiah are mentioned in the same verse.  Whenever Hezekiah was challenged with a crisis, Isaiah would be at his side providing wise counsel.

Leave A Response to "Seal of Prophet Isaiah" Cancel reply