The Black Obelisk of Shalmaneser is another extra-Biblical source confirming the historicity of the Biblical narrative.  The obelisk illustrates the Hebrew King Jehu from the Northern Tribes of Israel paying tribute to the Assyrian king Shalmaneser.

It is the most complete Assyrian obelisk yet discovered and is on display at the British Museum in London.  It is thought to have been created during the seventh century BC by the Assyrians in order to celebrate their regional conquests.  It was discovered in 1846 by archaeologist Sir Austen Henry Layard who was most famous for determining the actual location of the ancient Biblical city of Nineveh made famous by the Old Testament prophet Jonah.

During his time of exploration in what is now northern Iraq, he sent many ancient specimens of Assyrian antiquities to the British Museum.  One of these artifacts was the Black Obelisk which proved to have an important Biblical link 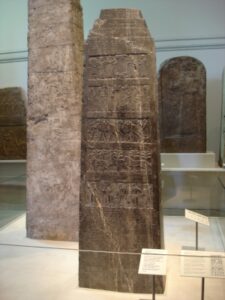 The Black Obelisk now housed in the British Museum.

The black obelisk has four sides and is nearly two meters high.  It depicts five scenes on each side for a total of twenty scenes.  These images show five defeated, subdued kings bringing tribute to the Assyrians after they were conquered.

We are particularly interested in only one of these scenes – the one dealing with ancient Israel. One of these conquered kings is “Jehu of Bit Omri (Jehu of the House of Omri), with each scene occupying four panels around the monument with text written in ancient cuneiform script.

It is thought Jehu was bringing tribute money to the Assyrian ruler to purchase his aid in defending his country from his enemies, especially the Arameans (known today as Syria).

The second conquered king from the top of the obelisk the Hebrew King Jehu in what is thought to be the earliest surviving image of a biblical figure.  The scene commemorates when Jehu sought the protection of Assyria after severing his alliances with the Phoenicians and Judah in or about the year 841 BC.

Jehu is shown bowing deeply with his face to the ground in front of Shalmaneser illustrating the episode in Scripture likely occurring in or about the year 841 BC where Jehu severed his alliances with the Phoenicians and Judah and became a subject of Assyria in an apparent hope for protection.

The cuneiform caption above the scene reads,

The tribute of Jehu, son of Omri: I receive from him silver, gold, a golden bowl, a golden vase with pointed bottom, golden tumblers, golden buckets, tin, a staff for a king, [and] spears.

Replicas of the obelisk can be viewed at various museums around the world. 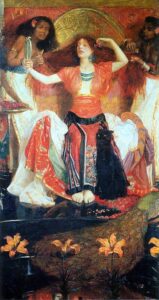 The Bible tells the rather grisly story of his reign.  He was not a particularly righteous man but served to cleanse the Northern Kingdom of some of the heinous practices of his predecessors.  He also brought some restoration of the country away from Baal worship and toward the worship of Yahweh.

The Battle of Ramoth-Gilead was one of the great battles in ancient Jewish history fought against the Arameans (Syria). Aram was constantly fighting with Israel’s north country and was frequently successful in subjugating its people.  Fighting between the two kingdoms would go on for several generations with most of the victories going to the Arameans.  Israel found itself unable to defend itself against Aram and would seek help from the powerful Kingdom of Assyria living in a territory now associated with northern Iraq.

King Ahab of Israel is known to most modern people only through his evil wife Jezebel.  Jezebel was not Jewish but was the daughter of the Phoenician king of Tyre, Ithobaal.  The marriage was mostly a political arrangement in order to secure peace between the two nations of Israel and Phoenicia.  The Jewish historian Josephus (27-100 AD) who quoted the Phoenician historian Menander of Ephesus.  Meander said the previous kind Phelles “waws slain by Ithobalus, the priest of Astarte, who reigned thirty-two years, and lived sixty-eight years; he was succeeded by his son Badezorus.”

The fact that Ithobaal was a priest of Astarte might help explain why his daughter – Jezebel – was so fervent in bringing the religion of Baal worship to the Hebrews.

The consequences of bringing in a Phoenician princess into the royal household were disastrous.  She assumed great influence in the royal court and worked diligently to tear down altars dedicated to Yahweh – the Hebrew God – and build altars to the foreign god Baal.  The Israelite community became overtaken by the increased influence of Baal worship and was divided over whether to worship the God of their Fathers or Baal from another culture.

But there was more at stake than just which deity to worship.  Baal worship brought with it sacrifice of children who could be burned alive trying to placate the deity.  The priests of Baal would dance around a statue erected to Baal while infants were burned alive in its fires.  The priests would dance, blow trumpets to drown out the cries of terrorized infants, and cut themselves in order to draw the attention of Baal to their sacrifice.

Ahab would be harshly judged for bringing Jezebel and her influence into the Jewish community.  During fighting at the Battle of Ramoth-Gilead, he was wounded in battle by an arrow that managed to get through a weak part of his armor.  He was propped up in his chariot by his soldiers only to gradually bleed to death.  Jezebel would continue to stay in the royal palace and exert considerable influence even though her husband had been killed.  The Syrians would ultimately triumph in battle as the Israeli’s suffered a terrible defeat.

Jehoram as the next king of Israel would later come back to fight at Ramoth-Gilead years later with his nephew King Ahaziah who was King of Judah (the Southern Kingdom) against Hazael then king of the Arameans.  Jehoram was wounded in the battle and went to Jezreel to recover.  Meanwhile, Jehu, his general, had been anointed king by the prophet Elisah’s student and incited a revolt against the entire ruling household.  As a part of this insurrection, he shot king Jehoram in the back with an arrow killing him instantly. 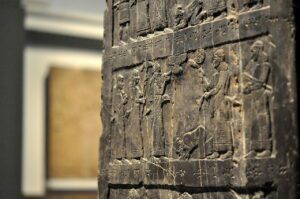 Jehu then had Jehoram’s body thrown into the fields of Naboth the Jezreelite as punishment for his parents’ (Ahab and Jezebel) sin in illegally stealing Naboth’s land.  It was at this time that the Ahab dynasty ended and Jehu claimed the throne as his own.  As a part of the insurrection, he would next work to eliminate the influence of the foreign Queen Jezebel.

Jezebel was still living in the royal palace even though her husband Ahab had been killed several years earlier.  Jehu rode into the city of Jezreel without resistance and saw Jezebel watching him from her palace window. Jehu commanded the palace eunuchs to throw her from the window and she was killed.  Jehu then drove his chariot over the body for further desecration of her body.  He later decided she deserved a burial but his servants found her body had been totally eaten by wild dogs except for her hands, feet, and skull.

Hazael would later (inaccurately) write in the Tel Dan Stele about how he killed Jehoram and the King of the House of David (Ahaziah) in the battle.  Hazael continued to fight successfully against Jehu eventually defeating his armies in the northern part of the Kingdom of Israel bordering on Syria including the lands of Gilead, Gad, Reuben, and Manasseh.

Many modern liberal theologians have long doubted the historicity of ancient scripture particular when it comes to the warring kings of Israel with their neighbors.  Over the past few years, archaeology has been finding evidence that these kings really existed and has placed them in the same context as within Scripture.

In the case of Jehu, he is seen in the Black Obelisk as bowing down to Shalmanasser while bringing him tribute.  Once again we have cause to believe the details of Scripture as their historicity is being substantiated through archaeologic findings.

The Jezebel Seal Jezebel is the quintessential evil queen in the Old Testament and even today is emblematic of a sinful woman. Jezebel was the daughter of Ethbaal, an ancient king of the Phoenicians (1 Kings 16/31). The ancient Jewish historian Josephus notes Ethbaal was a priest of Ashtoreth and… Read More »

Peter and Andrew’s House
Omri and the Moab Stele

Leave A Response to "Jehu and the Black Obelisk" Cancel reply