King Hezekiah’s stamp was found in an archaeological excavation and has been confirmed to belong to the ancient Jewish king.  It is a clay seal otherwise known as a “bulla” that was discovered in the Ophel excavation at the southern wall of the Temple Mount in Jerusalem.

The bulla itself is tiny, measuring only about a centimeter in diameter, bearing a seal impression showing a two-winged sun disk blanked by symbols including an Egyptian ankh.  The bulla bears the Hebrew inscription translated as “Belonging to Hezekiah, (son of) Ahaz, king of Judah.”

In the ancient world, bullae were used to secure strings used to wrap documents.   A royal seal would be pressed into wet clay in order to make the clay bulla, and the stamped clay bulla would then serve to both secure and authenticate the official document it secured.

The Hezekiah bulla is the first time a royal seal of Hezekiah has been found in an archaeological project.  Eilat Mazor noted in a Hebrew University press release,

Although seal impressions bearing King Hezekiah’s name have already been known from the antiquities market since the middle of the 1990s – some with a winged scarab (dung beetle) symbol and others with a winged sun – this is the first time that a seal impression of an Israelite or Judean king has ever come to light in a scientific archaeological excavation.

It seems that later in Hezekiah’s life, both the king’s personal symbols changed from the winged scarab – a symbol of power throughout the Middle East – to that of the winged sun – a motif that claimed the Lord’s protection.  It may be that the king’s personal seal was changed after he recovered from a life-threatening illness as described in II Kings 20:1-8.  The bulla was found together with 33 other bullae imprinted with other seas, some with Hebrew names.

Hezekiah was the 13th king of Judah and was the son of Ahaz, the 12th king.  He was known as a righteous king who worked to re-establish the temple rites and secures the 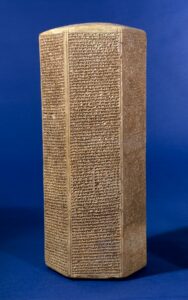 worship of Yahweh in Israel.  Perhaps the greatest challenge confronted by King Hezekiah was saving Jerusalem from the Assyrian king Sennacherib’s invasion in 701 BC.  Hezekiah anticipated the Assyrian attack and was able to fortify the city walls and built a tunnel known today as Hezekiah’s Tunnel, to ensure the citizens had access to water in the event of a siege.

The siege of Jerusalem was also documented from the Assyrian side as well.  A six-sided clay prism called the Sennacherib Prism (as well as other annals of the king) detail in Akkadian his successful military exploits throughout the reason including trapping Hezekiah in Jerusalem “like a bird in a cage.”

The Assyrians were known as being particularly destructive when invading a foreign country generally executing those who fought against them.  Those in a city who surrendered would be assimilated into the Assyrian empire and become citizens once they agreed to give homage to the king.

The building in which the bulla was found is also important because it helps to establish its purpose.  It was found in an administrative or royal building that was destroyed by the Babylonians when they conquered Jerusalem in 586 BC.  It was discovered in an area known as the Ophel which is between the Temple Mount and the City of David. It was found near a royal building in an ancient refuse dump dating back to Solomon’s time.

The bulla itself was discovered through a process known as wet-sifting.  Wet-sifting has been used ever since the illegal dumping of tons of soil bull-dozed on the Temple Mount in 1999.  The discarded earth opened up a treasure trove of information about the ancient history of that area.

Bullae from several other Biblical personalities have also been found in this area, most recently possibly one from the Prophet Isaiah found near the Hezekiah bulla.  Additionally, two bullae belonging to officials mentioned in the Bible from Jeremiah’s time, and a seal impression from King Ahaz, the wicked father of Hezekiah.

These archaeological discoveries help affirm the historicity of the Bible; that it is not just a book of fables but represents a history of ancient Israel.

This historicity tends to confirm the deeper theological content contained with Scripture as the entire document continues to be proven reliable.