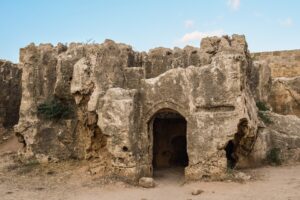 The advance of archaeology has brought further recognition of the historicity of many Biblical characters. Pontius Pilate was one of the most pivotal figures in the New Testament account of the earthly ministry of Christ. There have been a few ancient literary references of Pilate but no archaeological discoveries confirming his historicity; there were no ancient letters or correspondence from him, no artifacts bearing his name or image, and no physical evidence concerning his reign. This was the case until 1961 when a discovery was made which helped to establish him as an actual historical figure.

A team led by Italian archaeologist Antonio Frova found a piece of limestone rock that bore an ancient Latin inscription – some of it very difficult to read. Translation of the writing reads, 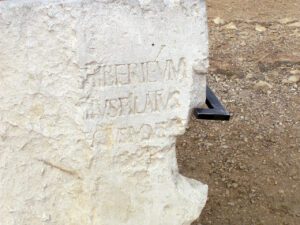 This inscription bears evidence for the actual historicity of Pontius Pilate, the ancient Roman prefect who condemned Christ to death. It is addressing the late Emperor Augustus Caesar who had died in AD 14. The stone resembled most other debris at the excavation site and could easily have been discarded.

The stone was used as a building material for a set of stairs in Caesarea’s Herodian theater. Fortunately, the stone was inserted into the stairs with its inscription faced down as the exposed limestone surface would likely have been worn away by the elements over the ensuing two millennia.

Pilate most likely made his permanent residence in Caesarea Maritima on the Sea of Galilee and only went to Jerusalem when he was forced to do so in order to satisfy his administrative responsibilities.

A replica of the “Pilate Stone” stands east of Caesarea’s “Palace of the Procurators” – a place where Paul was imprisoned for over two years and where he made his famous speech to Roman governor’s Felix and Festus which is documented in Scripture (Acts 23:31-35, 24:27). The original stone is kept at Jerusalem’s Israel Museum where it is protected from the elements.

Other Historical Allusions to Pilate

In addition to the Pilate Stone, and the Pilate Ring, there have also been other secular sources mentioning Pilate as a real historical person.  Some of these even mention Pilate in relationship to Christ.

Josephus in Antiquities of the Jews written about 94 AD, mentions Pontius P9ilate along with Philo of Alexandria his “furious temper” in on the Embassy to Gaius.  The Roman historian Tacitus wrote in his Annals in 116 AD

Christus, from whom the name had its origin, suffered the extreme penalty during the reign of Tiberius at the hands of one of our procurators, Pontius Pilatus”.

There seems little doubt that with the corroborating evidence of the Pilate Stone that this man really existed, really executed Christ at the behest of the people and Jewish leadership, and was really afraid of the turmoil surrounding Sejanus.

Philo of Alexandria was a prominent, well-respected Jewish philosopher who lived in Alexandria, Egypt from about 10 BC and 45 AD.  There was a vibrant Jewish community in Alexandria, Egypt, and it has long been suspected that this may have been where Mary and the Christ Child were headed when they escaped Bethlehem as Herod was trying to find him.

Philo went to Rome as the head of the Jewish delegation to see Gaius Caligula, the Emperor of Rome.  Caligula was insisting on having his divinity taken seriously, and insisted on a statue of him being placed in the Jerusalem Temple.  Such a statue would be considered sacrilege by the Jewish people making the Jewish situation precarious both in Jerusalem but also in Alexandria.

Philo ultimately failed in his mission to placate Caligula but wrote in his memoirs how Pilate’s refusal to remove pagan votive shields he had set up in the Herodian palace led to an imperial reprimand from Tiberius.  Philo described Pilate as,

naturally inflexible, a blend of self-will and relentlessness” and describes how Pilate feated that a complaint against him to Tiberius might “expose the rest of his conduct as governor by stating in full the briberies, the insults, then robberies, the outrages, and wanton injuries, the executions without trial constantly repeated, the ceaseless and supremely grievous cruelty.  So with all his vindictiveness and furious temper, he was in a difficult position.

It is no longer tenable to say Pilate never existed as the physical evidence is mounting that he was an actual historical figure.  The Pontius Pilate Stone joins the Pontius Pilate Ring and Jerusalem Street recently unearthed to establish his existence.

It is remarkable that a historical figure from two thousand years ago has multiple historical artifacts substantiating his existence.  Additionally, these artifacts portray a character that is consistent with the Biblical narrative further substantiating Scriptural historicity.

The recently discovered Moabite stone altar attests to the historicity of an ancient Jewish conflict between Israel and the Biblical Kingdom of Moab. The Kingdom of Moab Moab was a country near ancient Israel founded by the descendants of Lot, the nephew of Abraham.  The Bible notes this country was… Read More »

The Pilate Ring The New York Times reported on the discovery of a ring bearing the name of Pontius Pilate – the Roman official who ordered the killing of Christ – now called The Pilate Ring.. It was discovered in the late 1960s as one of the many artifacts found… Read More »