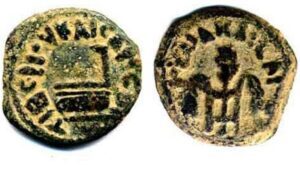 he New York Times reported on the discovery of a ring bearing the name of Pontius Pilate – the Roman official who ordered the killing of Christ – now called The Pilate Ring..

It was discovered in the late 1960s as one of the many artifacts found in the excavation of Herodium. The Herodium is an ancient fortress just south of Bethlehem in the West Bank. The area currently is controlled by Israel although claimed by the Palestinian.  The ring was badly worn and required the use of an advanced photographic technique to decipher the ring’s inscription.

The inscription reads “of Pilates” in Greek letters centered around a picture of a wine vessel. It is likely the ring belonged to an official working for Pilate as it probably is not sufficiently ornate to have been worn by the actual prefect.  More likely, the ring was associated with an administrator in the service of Pilate.

It is known that Pilate used Herod’s former palaces as his own in both Caesarea and Jerusalem, and it would be in character for him to use the one at the Herodium as well.  It is believed that the Herodium may have been an administrative center at the time of Pilate.  Architectural reports indicate Pilate repaired the Herodium water system and that the site continued to be active during Pilate’s reign.

Pilate was a prefect, or governor, of the province of Judea from 26 – 36 AD. The Israel Exploration Journal notes,

We think it implausible that a prefect would have used a simple, all-metal, copper-alloy personal sealing ring with a motif that was already a well-known Jewish motif in Judea before and during his rule.

Roi Porat, one of the authors of the report notes,

But in practice, we have a ring inscribed with the name Pilate and the personal connection just cries out.

The discovery site of the ring in the Herodium suggests the importance of the ring – that likely it was not just a minor artifact of some unimportant servant.  Furthermore, the name “Pilate” was not common in the region at that time and is likely associated with the real executioner of Christ.

Much of what is known about Pilate comes from ancient historians Flavius Josephus and Philo – both Jewish historians and Tacitus, a Roman official.

The inscription of the ring is Greek, which Roman officials often used to communicate with people in the Eastern Mediterranean area. It was a common language spoken by most people of the time – even those living in ancient Israel.

The first mention of Pilate from the area was from a stone uncovered in 1961 in the ancient port city of Caesarea. It is known as the Pilate Stone and is kept at the Israel Museum in Jerusalem.

Pilate was one of many Roman governors of the area whose main purpose was to keep the peace. His only claim to fame was his part in the execution of Christ. Were it not for this historical event, he would be hardly remembered as a minor unsuccessful Roman official in a remote Roman border area.

Pilate displayed considerable hostility and disdain for the Jewish inhabitants nearly provoking two uprisings. The Jewish historian Philo described Pilate as someone with “vindictiveness and furious temper” who was “naturally inflexible, a blend of self-will and relentlessness.” Philo referred to Pilate, “his corruption, and his acts of insolence, and his rapine, and his habit of insulting people, and his cruelty, and his continual murders of people untried and uncondemned, and his never ending, and gratuitous, and most grievous inhumanity.

Eusebius of Caesarea’s Ecclesiastical History reports that Pilate’s fate was to be exiled to Gaul and eventually ordered to kill himself by Emperor Caligula in 39 AD.

The discovery of the Pilate rine along with the Pilate Stone, hundreds of coins, ancient historians, and Scripture itself all attest to there being an actual Roman governor in Judea at the time of Christ named Pilate and further substantiates the Biblical narrative.

The bones of the ancient Jewish High Priest Caiaphas Caiaphas have been found.  He is one of the most despised New Testament figures – right up there with Pilate.  Caiaphas was an important official in Jerusalem and is named multiple times in the New Testament.  He served for eighteen years… Read More »

Leave A Response to "The Pilate Ring" Cancel reply