The bones of the ancient Jewish High Priest Caiaphas Caiaphas have been found.  He is one of the most despised New Testament figures – right up there with Pilate.  Caiaphas was an important official in Jerusalem and is named multiple times in the New Testament.  He served for eighteen years (AD 18-36) as a high priest appointed by the Roman government.  As such, he had two loyalties; one to the Jewish population for whom he served as their high priest, but also to the Roman government who appointed him.

Annas was the father-in-law of Caiaphas (John 18:13) and was also called a “high priest.”  Similarly, Luke states that John the Baptist also served “in the priesthood of Annas and Caiaphas.”  (Luke 3:2).  Their interrelationship is difficult to understand but there is a resolution.

Annas had been the high priest before Caiaphas from AD 7-15 until he was removed from that position by the Roman ruler Valerius Gratus (Josephus, Antiquities, 18.2.2).  Harrison notes,

It is likely that the Jewish people still regarded Annas as the legitimate holder of the office, which according to the Law [of Moses] was for life.”

Others have contended that it is possible that in New Testament times, the office of High Priest had been corrupted and was a term used to refer to everyone in the Jewish ruling class.

The tomb of Annas has also been found which is quite remarkable.  We now have actual archaeological artifacts of two of the important characters in the gospels relating to the life and times of Christ.

Caiaphas was an enemy of Christ.  He began to fully sense the potential impact of Christ after the resurrection of Lazarus and a council was convened.  The fear was expressed that if they just ignored Christ, the city populace might rally around the miracle maker which might bring the Romans down on the population.  It was Caiaphas who posed the question as to whether it was better for one man to perish [Christ] rather than the whole nation be killed.

The Jewish leaders could not carry out the sentence of death while being ruled by the Romans and so had to get Pilate – the Roman ruler over Jerusalem at the time – to condemn him.  This was later accomplished and Christ was ignominiously crucified.

The Caiaphas Ossuary with the Bones of Caiaphas 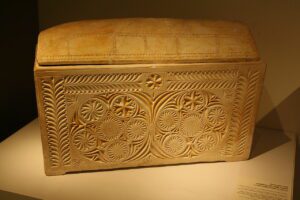 It was the custom of first-century Jews to bury their dead in an ossuary.  The body is first buried in a temporary burial place.  Then after at least a year the remains are moved and placed in an ossuary.  This greatly reduced the space taken up by dead bodies in crowded Jerusalem and elsewhere.  Over time, more than one person’s remains could be stored in a single tomb.

The custom of ossuary burial did not persist after the first century among Jewish populations.

Just south of Jerusalem in 1990, a limestone ossuary was discovered.  When it was examined, one contained the remnants of several persons including a man about sixty years of age.  This particular ossuary was elaborately decorated suggesting it belonged to an important person.  On the exterior were the words, ” Joseph, son of Caiaphas.”  Caiaphas was apparently a family name, and according to Josephus, the high priest who succeeded Annas was “Joseph Caiaphas.” (Antiquities, 18.2.2; 18:.4.3).

Ronny Reich of the Israel Antiquities Authority, suggests these are “in all probability” the bones of the same high priest who set in motion the events leading to the death of Christ. 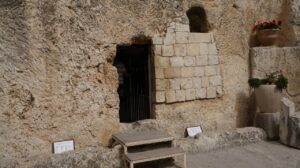 Example of the Garden Tomb

A burial space was sparse in ancient Jerusalem; it was the tradition during the centuries around the time of Christ’s life for a dead body to be placed on a rob slab within a cave or burial space.  A rock would be placed in front of the space in order to prevent wild animals and grave robbers from gaining access to the body.

Alternatively, poorer people were placed within a shroud and buried in the ground.  Usually only the rich could afford a space within a cave in order to have their initial burial.

After about a year passed and the body decayed, the family would return and gather up the bones and any possessions buried with the dead person.  They would then be placed within a limestone ossuary and stored by the family.  Often richer families would have the ossuary engraved with information regarding the bones housed within.

Modern archaeology has been very productive in the identification of artifacts belonging to multiple important Biblical people; certainly, Caiaphas fits into that group.  Other individuals whose artifacts have been found include Annas, Pilate, Isaiah, Jezebel, and King David.

It is difficult to exaggerate how important these artifacts are toward establishing the historicity of Scripture.  Until recently, the existence of these individuals has been questioned by liberal religious scholars who generally believe much of the history contained within Scripture is a myth.

The actual tomb of Annas – the father-in-law of Caiaphas – has also been found recently.  It is anticipated that more artifacts supporting Scripture will come to light every year adding further substantiation to the historicity of the Resurrection.

According to the most popular Bible translations, Mary Magdalene and the other Mary arrived at Christ’s tomb and found the stone protecting the entrance to the tomb mysteriously had been “rolled away.” Most of the tombs in ancient Jerusalem had huge stones blocking the opening of the tomb in order… Read More »

Omri and the Moab Stele
The Pilate Ring

Leave A Response to "Bones of Caiaphas" Cancel reply