The Sifting Project attempts to locate ancient artifacts in discarded debris from the Temple Mount from 1999.  At that time, access construction into an underground structure removed thousands of tons of sensitive debris.

There has long been controversy about whether Scripture portrays an accurate representation of actual history.  Skeptics question whether any of the characters actually lived.  They also question whether many of the civilizations in Scripture actually existed. Organizations within the United Nations have even questions whether there is a legitimate history of Jews in Palestine.

Recent history makes this determination much more important. Arguments question whether Jews have a legitimate claim to the land now called Palestine.  Some contend they never had a historical presence in Israel and are “occupiers.”

The recent findings in Israel and particularly in Jerusalem should lay rest to these objections. Artifacts include bullae or stamps belonging to Biblical legends like Jezebel, Isaiah, King Josiah, Pontius Pilate, among others.

Of course, politics often trumps history concerning Israel and their Jewish presence.  This is true even when the ever-expanding list of Scripture-confirming archaeological artifacts confirms otherwise.

Some of the most interesting artifacts confirming the ancient presence of Jews in the land of Israel come from the Sifting Project. 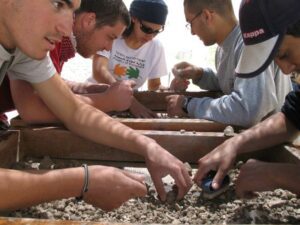 The archaeological project traces its history back to an illegal pillaging of the Temple Mount by an Islamic building project in 2004.

A building project to enable external access to what were called “Solomon’s horse stables” under the Temple was conducted illegally with the refused carried by about 400 truckloads to a local dump. The removal of 9,000 tons of material was performed in 1999 with the material being left undisturbed for five years.

This debris contained within the removed rock has been the object of intense controversy because it was considered sacred material. There was also the possibility that the material might contain precious artifacts from ancient Israel.

An archaeological project was begun in 2004 with the aim to recover any important artifacts which might be contained within the refuse material utilizing tourists and many volunteers to help sift through the debris.

The sifting was initially conducted in Tzurim Valley national park until 2017 and then moved to the Masu’ot Lookout at Mt. Scopus 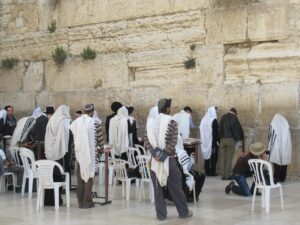 No archaeological study has been done on the Temple Mount despite its obvious historical importance. There has always been a political argument over who would have control over such a project and how any archaeological findings would be handled.

An excavation permit was finally obtained in 2004 by Israeli archaeologists Gabriel Barkay and Zachi Dvira with funding from private backers. This allowed the retrieval of most of the heaps of soil and move it to a private, secure location provided by the Israel Nature and Parks Authority.

Due to the obvious importance of these studies, the project began with hundreds of thousands of volunteers who briefly join in the sifting activity supervised by specially trained staff volunteers.

The Sifting Project has held several Crowdfunding campaigns in order to derive sufficient funds to keep afloat. Priority has been placed on sifting through all the material first before the publication of the findings due to the limitation of funding.

There was a trial and error period during the beginning of the sifting to determine the best way to find obscure, usually small artifacts within the tons of dirt and rock.

Initially, dry sifting was attempted but it was quickly found that it was difficult to differentiate between soil encrusted rock and soil encrusted artifact. Wet sifting ensued whereby the material was soaked in water with the removal of dirt and soil clinging to the rocks and artifacts enabling them to be distinguished with relative ease.

Archaeologists then remove objects which are retrieved from the sifted dirt to a laboratory for further evaluation by specialists.

Interestingly, one problem has developed with the greater efficiency and accuracy of the sifting project. In most other archaeological sites, the soil is not sifted using the same water soaking techniques. This lead to a much greater retrieval of smaller artifacts from the sifting site than other archaeological sites.  Therefore, a comparison of yield and types of yield is more difficult to compare.

The Sifting Project in Jerusalem has produced a rise in the number of seal and impressions compared to other sifting excavations.

To overcome this sampling bias, archaeologists go to many other sites throughout Israel.  They carry out sifting with the more effective techniques perfected at the Sifting Project. These findings will be published in the scientific literature.

Results from the Sifting Site

The most interesting results from the Sifting Project are from the First Temple Period from 1000 to 586 BC. Approximately 15% of the pottery finds are from this time frame.

There have been about 130 typical Judahite figurine fragments discovered during the sifting. Another 30 figures were located in an ancient garbage dump along the slopes of the Temple Mount.

A rare arrowhead of the type used by the forces of Nebuchadnezzar from around 600 BC.  Other inscription artifacts bear an LMLK seal (meaning “of the king”).  There are also dozens of vases and various seals and bullae.

The most common findings are from the Second Temple Period dating from 516 BC to 70 AD. Over 70% of the pottery finds are in the Second Temple period. Additionally, sifters have found tiles used in the flooring of the Second Temple.  The Jews started building the Second Temple hundreds of years before Christ’s birth.  King Herod then finished the construction using Jewish conscripts and “volunteers.”

Sifters have recovered more than 500 coins with most belonging to the Second Temple period.  Jews minted some of these coins during the First Jewish Revolt during 70 AD.  Minting coins attesting to the courage of the Jewish defenders as the minting of money was forbidden.

The Sifting Project is still ongoing with thousands of tourists, archaeologists, and other volunteers actively involved in the monumental effort.

Scientists still need to examine hundreds of tons of material. This increases the chance of a great discovery.

But the greatest discovery is how well the result confirms the Biblical narrative.  The Sifting Project also validates the Jewish claim to Jerusalem as science now validates their claim of ownership.

Intelligent Design
Why Does the Sun Shine

Leave A Response to "The Sifting Project" Cancel reply