The Siloam tunnel is a tunnel located in the Palestinian section of East Jerusalem with an amazing history. It was first described in the modern era by Franciscus Quaresmius in 1625 and was explored about two centuries later by an American Bible scholar Edward Robinson.

A few decades later, Charles Warren proposed the Pool of Siloam may be identical to the tunnel “dug by King Hezekiah.” Shortly after his suggestion, two boys discovered the Siloam inscription.

Construction of the Tunnel 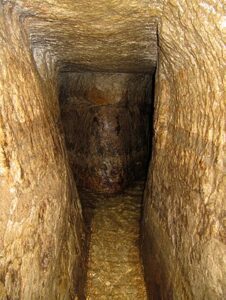 The construction of the Hezekiah tunnel is perhaps one of the most amazing aspects of its history. It was a dangerous time when the very existence of the Israelite nation was in significant danger. It was being threatened by the Assyrian Empire – the one which had just ravaged and enslaved the Northern Kingdom.

Hezekiah realized that the city would need water and lots of it, in order to live through a prolonged siege. He was also concerned the water entering the city would not then be discharged from the city and reused by their captors.

It turns out that the ground near the tunnel has large amounts of limestone deposits which could absorb the wastewater keeping it away from their enemy’s water supply.

The only problem was that somehow a tunnel about 1800 feet long would have to be carved through rock using the primitive tools available to the workers at that time.

The tunnel is also curved meaning there was no straight line sighting the two workforces could use to ensure they met somewhere in the middle. Researchers believe the tunnel may have been curved purposefully in order to avoid going through a cemetery. Another thought is that it followed natural planes within the rock making the tunnel easier to care out.

This is a feat that would be difficult even by today’s standards.

The two working groups met in the middle and in the tradition and celebrated their success by carving a message into the side of the tunnel commemorating the successful completion of their mission.

It was an amazing finding and one of the oldest existing records written in Hebrew using the Paleo-Hebrew alphabet. The inscription was written on the side of the tunnel wall and was missed by prior explorers likely due to darkness in the tunnel.

Unfortunately, the inscription can no longer be found in the tunnel because it was surreptitiously cut from the wall of the tunnel in 1891 and broken into fragments under mysterious circumstances.

Thankfully, the fragments were recovered through the efforts of the British Consul but are not kept in Israel. Because Palestine was at that time under control of the Ottoman Empire, the inscription was sent to Turkey and now resides in the Istanbul Archaeology Museum.

When finally interpreted, the Siloam inscription said the following;

(1) [. . .] the tunneling. And this is the narrative of the tunneling: While [the stone-cutters were wielding]

(3) to his co-worker, because there was a fissure in the rock, running from south [to north]. And on the (final) day of

(4) tunneling, each of the stone cutters was striking (the stone) forcefully so as to meet his co-worker, pick after pick. And

(6) cubits was the height of the rock above the head of the stone-cutters.

The Siloam Tunnel is richly documented in Scripture. The Bible notes,

As for the other events of Hezekiah’s reign, all his achievements and how he made the pool and the tunnel by which he brought water into the city, are they not written in the book of the annals of the kings of Judah (2 Kings 20;20)

When Hezekiah saw that Sennacherib had come and that he intended to wage war against Jerusalem, he consulted with his officials and military staff about blocking off the water from the springs outside the city, and they helped him. They gathered a large group of people who blocked all the springs and the stream that flowed through the land. ‘Why should the kings of Assyria come and find plenty of water’ they said. 2 Chronicles 32:2-4)

It was Hezekiah who blocked the upper outlet of the Gihon spring and channeled the water down to the west side of the City of David. He succeeded in everything he undertook. (2 Chronicles 32:30).

You also saw the City of David, that it was great. And you gathered together the waters of the lower pool. You also made a reservoir between the two walls for the water of the old pool. But you did not look at its Maker. Nor did you have respect for Him who fashioned it long ago. (Isaiah 22:11).

The existence of Hezekiah’s tunnel has been known for about 180 years, but its existence never fails to amaze tourists to Jerusalem.  It was built as an act of desperation to obtain fresh water from springs located just outside the city.  They knew a powerful enemy was coming to kill and enslave the city – they needed to prepare.

What is equally amazing is that the tunnel was built at all.  It is nearly 3,000 years old and hewn from solid rock for 1800 feet using the primitive tools available at that time.

What is also amazing is that two groups of workers started at opposite ends of the tunnel and managed to meet in the middle. – a feat that would be difficult today.

But the major importance of the tunnel is that it confirms a Biblical narrative written in Scripture 3,000 years ago concerning an ancient Jewish King who was trying to protect his people from a powerful enemy.

Once again, the Biblical narrative has been proven to be accurate as an ancient long-forgotten tunnel links the ancient world to the present..