There is a relationship between improving fetal ultrasounds and abortion rates.  Three-dimensional fetal ultrasound is particularly useful in demonstrating the facial and body characteristics of an unborn child.  The earlier two-dimensional technology gave much less facial detail making the image look less human.

In short, improving ultrasound makes the “lump of tissue” within the pregnant woman’s uterus appear to be just what it is – an unborn baby.  This helps to make the mother more informed about her pregnancy before choosing abortion. 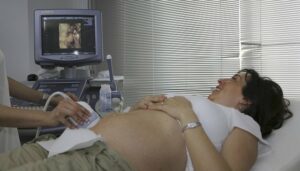 Image by MedicalPrudens from Pixabay

The Washington Examiner recently had an article concerning the use of ultrasounds in Planned Parenthood clinics.

The heart starts to beat at about 4 weeks after fertilization, while hands and feet are seen to be developing at six weeks of age.  At seven weeks of age, the child appears to be stretching, sucking its thumb, and even taking sighs.

The hundreds of thousands of pregnant women who pass through the doors of Planned Parenthood routinely get ultrasounds of their pre-born baby; however, they do not get to see these images.  These images are only seen by the staff unlike at a physician’s office or a Pregnancy Center.

Former Planned Parenthood manager Sue Thayer (and others) note that staffers deliberately turn the ultrasound screen away from the pregnant women so she cannot see the child prior to the abortion.

Why the Deception about Fetal Ultrasounds and Abortion

The reason why Planned Parenthood chooses to hide these images from the woman seems apparent.  They would inform the mother that her child is not a “glob of products of conception” but rather has a beating heart, hands, feet, and a personable face.  The image reveals the fetus for what it is – a pre-born child.

Keeping these images secret from the mother makes it easier to convince them that their preborn children are not really human yet.  They clearly are.

Catherine Adair is a former Planned Parenthood employed told the Washington Examiner in 2011 that employees would hide the child’s appearance.  She said she was “continuously reminded that when referring to the baby, the appropriate terminology was ‘clump of cells’ or ‘contents of the uterus.'”

Even a baby at nine month’s gestation just prior to being born is not considered a “baby.”  The training manuals specifically inform the abortionists to avoid using the term ‘baby.’  The obvious reason for using euphemisms to describe the uterine contents is not to discourage the mother from continuing the abortion.

Planned Parenthood does not use the ultrasound machine to follow the progress of the developing baby during pregnancy – rather, the idea is to help with the abortion procedure.

Live-Action – a pro-life group – investigated 68 Planned Parenthood facilities across the nation posing as pregnant women who wanted to keep their babies.  They wished to use the facility’s ultrasound to determine the health of their baby.  The women were turned away at 65 of these facilities and were told the machines were only used for facilitating abortions.

Live-Action raises makes the two points on their website concerning the use of ultrasound machines at Planned Parenthood,

First, if Planned Parenthood truly believed in “choice” for women as it says it does, then why won’t it use its ultrasounds to help women have healthy pregnancies who choose to keep their babies?

Second, if Planned Parenthood genuinely believed in “choice,” then why does it hide pre-abortion ultrasound images from mothers? Why conceal the truth? Why not let them make the most informed choice they can?

Summary of Fetal Ultrasounds and Abortion

Planned Parenthood is a business entity that makes most of its money from abortions.  They perform about one-third of all abortions in the United States, more than 320,000 a year.

Furthermore, in-line with their primary business of abortion, other services like breast examinations, Pap tests, and prenatal care have experienced huge declines over the past ten years (62, 74, and 29 percent respectively), while the number of abortions rose by 24 percent.

They are very good at what they do.

Those who are in favor of a large, centralized government often believe giving other people’s money to charity is to be encouraged.  Those who pay taxes do not have a direct voice in how their money is spent, or how inefficiently the government redistributes their hard-earned dollars. Benjamin Franklin is… Read More »

The question as to who has custody of children has become a central issue in the homeschooling controversy recently opened by a Harvard Law professor, Elizabeth Bartholet.  She is the faculty director of the Harvard Law School’s Child Advocacy Program who recently wrote an article which proposes a ban on… Read More »

Charitable giving has been part of the American narrative since its founding.  The average citizen of colonial America supported the church, helped build hospitals, libraries, and supported higher education. Charitable giving has also been important to some of the richest Americans who ever lived.  Rockefeller was one of those Americans…. Read More »

Leave A Response to "Fetal Ultrasounds and Abortion" Cancel reply