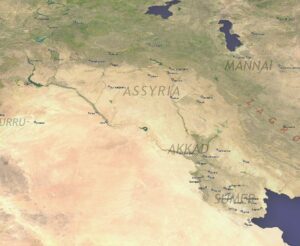 Christians are very familiar with the story of Jonah in the Old Testament.  The Reader’s Digest version is that Jonah was a Jewish prophet who was called to go to the capital city of the Assyrian empire – Nineveh.  The Assyrians were particularly troublesome of the northern ten tribes of Israel due to repeated military conflicts.  Eventually, the Assyrians would conquer the ten tribes them away into slavery and captivity.  Jonah was to preach repentance to these people with the understanding they could then repent and avoid God’s judgment.

The problem was that Jonah was not particularly interested in the welfare of the Assyrians and would rather God judge them for their atrocities perpetrated against his people.

Jonah decided to ignore God’s calling to preach repentance to Nineveh and instead went the other direction. He got on a ship to escape his assignment but God intervened.   The ship was engulfed by a great storm and about to sink killing everybody on board. The sailors figured out the storm was meant for Jonah and resulted from his disobedience to God.  The sailors decided to throw Jonah overboard hoping to save themselves from God’s anger.

The story might have ended there except God’s calling on Jonah was not canceled by the sailor’s wishes or by Jonah’s disobedience. A large fish swallowed Jonah whole and spit him out on dry ground three days later. Jonah then accepted his fate and preached repentance to Nineveh resulting in the city’s repentance and subsequently cancel God’s anger.

The Relevance of the Story of Jonah

Many have questioned whether this story is real or allegorical, wondering whether a person might live in the stomach of a submerged fish for three days.

Whether the story presents the history of a real prophet or is only allegorical can be reasonably argued.  But what can’t be argued is the importance of the story due to its relevance to the resurrection. 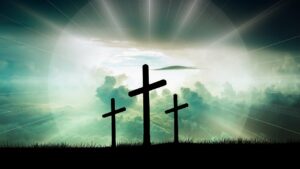 Instead, the writers of the New Testament point to the fact that Christ’s resurrection was the fulfillment of Scripture.  For example, Paul notes that Christ was raised on the third day “in accordance with the scriptures.” (1 Corinthians 15:4).   But what Scripture if Paul referencing?  There is an obscure passage in Hosea which speaks about a group of people being raised up to life on the “third day” (Hosea 6:1-2).  This passage seems to refer to the resurrection of the people of Israel using an image of coming back to life to describe the regathering of Israel.

Looking back to the Gospels, there is one passage from Jewish Scripture that Christ cites as a direct prophecy of his resurrection on the third day – the sign of Jonah.

The Gospel of Matthew notes,

Then some of the scribes and Pharisees said to him, “Teacher, we wish to see a sign from you.”  But he answered them, “An evil and adulterous generation seeks for a sign; but no sign shall be given to it except the sign of the prophet Jonah.  For as Jonah was three days and three nights in the belly of the whale, so will the Son of Man be three days and three nights in the heart of the earth.  The men of Nineveh will arise at the judgment with this generation and condemn it; for they repented at the preaching of Jonah, and behold, something greater than Jonah is here. (Matthew 12:38-41). 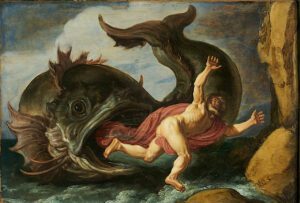 people are very underwhelmed by the story of Jonah – how could anybody stay alive in the stomach of a submerged fish?

In fact, the story actually says that Jonah died and went to the realm of the dead.  Jonah noted,

“I called to the Lord, out of my distress,
and he answered me;
out of the belly of Sheol I cried
and thou didst hear my voice.
The waters closed in over me,
the deep was round about me;
weeds were wrapped about my head
at the roots of the mountains,
I went down to the land
whose bars closed upon me forever;
yet you brought my life from the Pit,
O Lord my God,
When my soul gained within me,
I remembered the Lord;
and my prayer came to you,
into your holy temple

When Jonah says that he cried out to God from “the belly of Sheol” and “the Pit” – those are standard Old Testament terms for the realm of the dead (Psalm 139:7-8 for example).  Also, Jonah was saying that he died when his “soul” fainted within him.

Arise, go to Nineveh, that great city, and proclaim to it the message that I tell you.

The first word that God speaks to Jonah while he is lying dead on the shore is to “Arise.”  This is the same Semitic word (Hebrew qum) that Jesus uses when he raises Jairus’ daughter from the dead and says to her, “Talitha cumi” meaning “Little girl, arrive.

The story of Jonah is a story of death and resurrection.

There is another great miracle in the story – that the sinful city of Nineveh repented.  That would be like saying Las Vegas repented!  In response to the preaching of Jonah, the entire city – including the King – repented, believed God, proclaimed a fast, put on sackcloth – from the greatest to the least. (Jonah 3:6-8).

The Jewish Pharisees ask Christ for a sign that he is the Messiah.  Jesus declares that the only “sign” he will give to them is the sign of the prophet Jonah.  The sign includes two great miracles, the death and resurrection of Jonah, and the repentance of the Gentiles.

Christ is saying that it is not just his resurrection that shows he is the Messiah, but also the inexplicable conversion of millions of pagans around the world.

Many today take it for granted that over centuries of time, literally billions of pagans have abandoned idol worship and turn to worship the Messiah.

Scholars over the ages when asked to make the case for Christ being the Messiah – the Son of God – they do not point to the empty tomb, historical probability, the fulfillment of ancient prophecy, etc.  Instead, the ancient church fathers simply pointed to the pagan world that was crumbling to the ground as billions of Gentiles turned to Christ.

For example, one of the church fathers, Andrew of Milan, wrote,

The mystery of the Church is clearly expressed (in Jesus’ words about the sign of Jonah).  Her blocks stretch from the boundaries of the whole world.  They stretch to Nineveh through penitence. … The mystery is now fulfilled in truth. (Exposition of the Gospel of Luke, 7:96).

Behold how today, yes, in our own times, our eyes see not only Egyptians but every race of men who used to be idolaters. … released from the errors of polytheism and the demons, and the calling on the God of the prophets! … Yes, in our own time the knowledge of the Omnipotent God shines forth and sets a seal of certainty on the forecasts of the prophets.  You see this actually going on, you no longer only expect to hear of it, and if you ask the moment when the change began, for all your inquiry you will receive no other answer but the moment of the appearance of the Savior. … And who would not be struck by the extraordinary change – that men who for ages have paid divine honor to wood and stone and demons, wile beasts that feed on human flesh, poisonous reptiles, animals of every kind, repulsive monsters, fire and death, and the lifeless elements of the universe should alter our Savior coming pray to the Most High God, Creator of Heaven and death, the actual Lord of the prophets, and the God of Abraham and his forefathers?  (The Proof of the Gospel, 1.6.20-21)

Is this just a coincidence?  To claim a coincidence would be to say the multitude of passages in the Old Testament which proclaim that one day the pagan nations of the world would turn and worship the God of Abraham and that this would happen after the death of Christ. (Isaiah 2:1-3;25:6-8; 66:18-21; Jeremiah 3:15-18; Micah 4:1-2; Zechariah 8:20-23).  It would also have to be argued that these mass conversions all happened to coincide with the life, death, and resurrection of Christ who just happened to live and die at the very time that the book of Daniel said the Messiah would come.  And then when this Christ was killed in a manner foretold by Isaiah (Isaiah 53), the tomb just happened to be inexplicably empty and hundreds of disciples began claiming to have seen him alive again.

Or, you could posit that Christ was right – that he really was who he said he was.

Christ really was raised on the third day, the tomb was empty – and it still is.  The Gentile nations turn to Christ in droves – because someone greater than Jonah is here.

The bones of the ancient Jewish High Priest Caiaphas Caiaphas have been found.  He is one of the most despised New Testament figures – right up there with Pilate.  Caiaphas was an important official in Jerusalem and is named multiple times in the New Testament.  He served for eighteen years… Read More »

« Why Christ was Crucified
Historicity of the Resurrection »

Leave A Response to "Sign of Jonah" Cancel reply