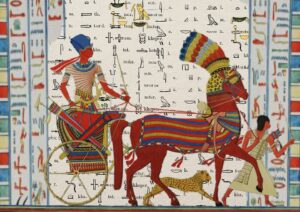 The Shishak invasion of Israel by the Egyptian armies of Shishak is described in Scripture and illustrated on a wall located in Egypt.

The reign of King Rehoboam was tumultuous.  He was the son of Solomon and a grandson of David.  The Kingdom of David was still united when Rehoboam took over after the death of Solomon, his father.

Solomon, the King of Israel, had broken the Mosaic mandates of the Torah by taking wives who were not Jewish.  The clear reason for this mandate was to prevent non-Jewish customs and beliefs from infiltrating into the Jewish community and turning their allegiance from God.

Nor shall you make marriages with them.  You shall not give your daughter to their son, nor take their daughter for your son.

Solomon decided to marry foreign wives and became influenced by them, even worshipping the gods of the Moabite and Ammonite people,

So the Lord became angry with Solomon because his heart had turned from the Lord God of Israel … Therefore the Lord said to Solomon, “Because you have done this, and have not kept by covenant and My Statues, which I have commanded you, I will surely tear the kingdom away from you and give it to your servant.   Nevertheless, I will not do it in your days, for the sake of your father David; I will tar it out of the hand of your son. (1 Kings 11:1-13)

Shortly after the death of Solomon, the northern ten tribes of Israel rebelled in 932 BC forming the Northern Kingdom of Israel.

The fifth year of Rehoboam’s reign over the southern two tribes of Israel that did not rebel (Judah and Benjamin) was marked by an invasion.  Shishak, who was the king of Egypt, brought a huge army into Judah and captured many cities.  All the fortified towns guarding Jerusalem were captured by Egypt.

Jerusalem itself was more capably fortified and Shishak was unable to capture the city outright but laid siege to the city.  Rehoboam recognized the hopelessness of his situation and gave the Egyptians tribute from their Temple so they would let the inhabitants of the city live.  This tribute included a considerable amount of artifacts made out of gold and silver and would be worth a fortune in today’s currency.  Judah then became a vassal state of Egypt.

Many minimalist liberal scholars have long scorned this invasion as a myth that was invented by a story-teller living centuries later.  These stories were made up in order to glorify their past history; in reality, their past history was mundane and ordinary.

Modern archaeology keeps on finding artifacts which substantiate the Biblical narrative – this time, the story of the Egyptian invasion.

Confirmation of the narrative is found in Egypt.  The ancient Pharaohs would chisel their victories into stone so they could be remembered for centuries.  In this case, there is an ancient portal located on the wall of the temple of Amon-Ra in Karmak showing a memorial to Shishak’s triumph.

This portal shows every conquered city represented by a cartouche showing an enslaved Hebrew man with his arms tied behind his back.

One of the world’s leading Egyptologists Kenneth Kitchen translates one word group as “highlands of David.”  He thought this represented the general area of Jerusalem previously ruled by King David of Israel.

If Kitchen is correct concerning this cartouche, it would be the earliest reference to David outside of the Bible.  The two other references are located on non-Jewish monuments.  One is on the Mesha Stele (also called the Moabite Stele) and the other being the Tel Dan Stele discovered in 1993.

The inscriptions on the wall of a portal in Karmak, Egypt also tell of Shishak’s invasion into the ancient Israelite city of Megiddo.  This inscription is corroborated by the Megiddo Stele now housed in the Rockefeller Museum in Jerusalem.

The Megiddo Stele is a fragment of a commemorative stele originally located at Megiddo to mark the Pharaoh’s military victory there.  This fragment is not very well preserved bt the name of the king and several phrases praising him can be deciphered.

The importance of this small fragment is that it substantiates both the Biblical account as well as the much more extensive history provided by the inscriptions in Egypt.

Summary of the Shishak Invasion

Once again, Biblical history has been substantiated by archaeology.  Only a century ago, much of this evidence was still buried in the ground and most scholars believed much of Biblical history was pure mythology.

There was little if any evidence for an Egyptian invasion of Israel during the reign of Rehoboam until it was found by secular archaeologists.  This evidence substantiated the Biblical narrative and in turn the historicity of Scripture.

Recent archaeology has found that the widespread belief that Biblical history is a fable is itself a fable.  Whole groups of people which were thought to be mythical creations have now been positively identified through modern archaeology.

The Biblical Archaeology Society wrote a nice piece concerning Jezebel’s hometown – the infamous Queen who led Israel into idolatry but later was eaten by dogs. Sidon Sidon was an influential ancient Phoenician city along the Mediterranean Sea now located in modern-day Lebanon.  Some of the latest archaeological discoveries concern… Read More »

Omri and the Moab Stele

One of the most remarkable affirmations of Biblical historicity is presented by the Moab or Mesha Stele. It is constructed out of black basalt (or volcanic rock) bearing an inscription by a ninth-century BC Moabite King named Mesha. The Moabites were a population group that lived near the Israelites in… Read More »

The Hittites
Giving Other People’s Money

Leave A Response to "The Shishak Invasion" Cancel reply