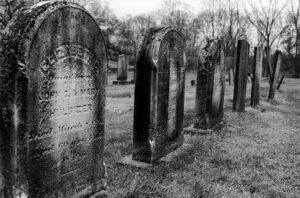 Image by Brent Connelly from Pixabay

There are three doomed cities pronounced by Christ in the New Testament.  These particular cities had seen more miraculous events and the personal teaching of Christ for years, and yet they failed to understand.  They could not see the meaning of what was right before their eyes.

Many readers are familiar with Christ’s pronouncement against Jerusalem,

For the days shall come upon you when your enemies will throw up a bank before your, and surround you, and hem you in on every side, and will level you to the ground and your children within you, and they will not leave in you one stone upon another, because you did not recognize the time of your visitation. (Luke 230:43,44).

The people of Jerusalem did not recognize Christ as the Messiah because they were looking for something else.  They were oppressed by Rom and were looking for Christ the King, and not Christ the Servant.  They failed to interpret Scripture correctly because it had told them to the day when Christ would appear.

The Jerusalem prophecy was fulfilled literally in 70 AD when the Romans decimated Jerusalem. Nothing was left of the Temple in Jerusalem except its foundation.

Fewer Christians are aware 0f similar condemnation by Christ of three cities where he lived north of the Sea of Galilee.  These three cities are Chorazin, Bethsaida, and Capernaum.  They were three small cities where the people had seen great miracles by Christ and yet most people would not recognize Christ as the Messiah.  George Davis notes,

We read in the New Testament of four ancient cities which were beautifully situated near or in the shores of the Sea of Galilee.  These four cities were Capernaum, Chorazin, Bethsaida, and Tiberias.  Three of these cities have perished.  Only the last name is standing today.

Christ predicts that Chorazin and Bethsaida will be punished more severely than even Tyre and Sidon and that Capernaum will suffer a worse fate than Sidon.  There is no specific prophecy as to how or when the cities would be destroyed – only that they would be history.  \

These cities were important to the local economy of Galilee as they were very prosperous,

The three cities of Bethsaida, Korazim, and Capernaum were the three largest and most important along the northern shore of the Sea of Galilee in Jesus’ day. Bethsaida, which literally means house of fishing, seems to have been the most populated city in Galilee. The nearly 25-acre site was occupied by both Jews and non-Jews with each group maintaining its own lifestyle. John 1:44 tells us that the apostles Philip, Andrew, and Peter were from Bethsaida where Jesus was most active in his early ministry.

A sample of some of the miracles performed here is given by Mark with the healing of the blind man,

And he cometh to Bethsaida, and they bring a blind man unto him and besought him to touch him.And he took the blind man by the hand, and led him out of the town; and when he had spit on his eyes and put his hands upon him, he asked him if he saw ought. And he looked up, and said, I see men as trees, walking. After that, he put his hands again upon his eyes and made him look up: and he was restored, and saw every man clearly. 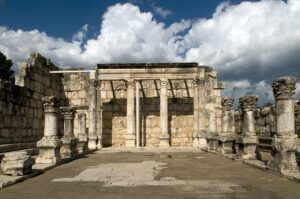 By Eddie Gerald – This file has been provided by UNESCO (unesco.org) as part of a GLAM-Wiki partnership., CC BY-SA 3.0-igo, https://commons.wikimedia.org/w/index.php?curid=37387366

Capernaum – One of the Three Doomed Cities

The city developed a large Christian community during the first century AD, but most refused to believe in the Messiah.  The growing group of believers in that city posed a significant problem for the remaining Orthodox Jews living there.  Originally, there was a “praxis” or custom forbidding any non-Jew from living in the city.  There was also true in several other cities in Galilee including Tiberias, Sepphoris, and Nazareth.

The problem was that many people living in Capernaum were converting to Christianity – what to do with them?  Since they were already residents in the city, they apparently could not be expelled but were tolerated – barely.

There were two groups of people in ancient Capernaum during the first century.  First, there was the dominant population of Orthodox Jews who refused to believe in Christ, and who continued business as usual.  Then there were the Jewish converts to Christianity who were called the minim or “heretics.”  It is believed that many of the minim continued to go to the Jewish synagogues during the Saturday Sabbath, and then at sundown (when Sunday would start according to Jewish reconning), they came together in a Sunday service.

The converts to Christianity continued to be so numerous that the local Jewish leaders became alarmed at what was happening.  They decided to add a curse to a series of blessings that were recited every day.  The curse against all believers was,

Let there be no hope for the informers and let all the heretics be eradicated immediately and all the enemies of your people be speedily cut off: and the kingdom of iniquity speedily uproot, shatter and crush and subdue speedily in our day.

This curse failed to achieve its intended purpose and Orthodox Jews continued to convert to Christianity until they eventually outnumbered the non-believers. 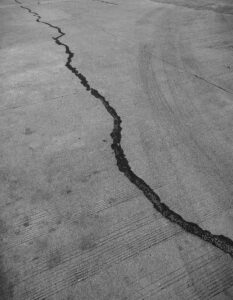 George Davis notes in his book Bible Prophecies Fulfilled Today that an earthquake struck the area which destroyed Capernaum.  This history comes from an ancient church historian and theologian Eusebius of Caesarea.  He relates the destruction to an earthquake in 363 AD.  While Capernaum was restored at the end of the fourth century. The other two cities were left in ruin and their location only recently established.  The state of Chorazin’s destruction can be glimpsed by a mid-nineteenth century observation in Edward Robinson’s book Biblical Researches in Palestine. The author had actually discovered the ancient city but failed to recognize his discovery,

The ruins we had been told of lie on the west side of this same valley, a quarter of a mile southwest, near its entrance into the main Wady. They consist simply of a few foundations of black stones ; the remains evidently of a poor and inconsiderable village. They are known as Khirbet Kerâzeh. We did not go to them, as there was no path; and because they were in full view. Their distance from Tell Hùm must be reckoned at about three miles. We had come to this spot, because the name Kerázeh bears a degree of resemblance to the Chorazin of the New Testament; and we hoped to find, in the ruins or the situation, something which might determine the position of that ancient place. In this we felt ourselves disappointed. The remains are too trivial to have ever belonged to a place of any importance. Chorazin, too, according to Jerome, lay upon the shore of the lake; but this site is an hour distant. shut in among the hills, without any view of the lake, and remote from any public road whether ancient or modern.

Bethsaida is in even a worse situation.  Archaeologists believe they have discovered the location of the original village mentioned in Scripture but the situation is far from settled.  The most likely location housed an ancient Byzantine church building matching the description of a traveler in 750 AD.  They also uncovered the remains of an ancient Roman bathhouse suggesting the town’s importance.  Whether this is the actual site of Bethsaida is still not firmly established as several prominent archaeologists affirm another location.

Likely, many of the other cities on the northern rim of the Sea of Galilee were also destroyed.  Many of the destroyed remnants of the ancient city can be seen here.

Christ was not pleased with the reception he received at the cities of Capernaum, Chorazin, and Bethsaida.  He had performed many miracles in Capernaum and still, most of the population rejected him.

He specifically predicts that Chorazin and Bethsaida will suffer a worse judgment than Tyre and Sidon, while Capernaum will suffer more than the city of Sodom.  While these proclamations have seen fulfillment in each of these cities, they may also refer to a future time of judgment when nations and cities are individually judged.

Each time we have visited Tiberias and the area around the Sea of Galilee, we have been impressed anew with the truthfulness and the supernatural inspiration of the Word of God.  There are the ruins of three cities destroyed exactly as foretold by our Lord, and one city, Tiberias, upon which no word of judgment was uttered, still standing and flourishing after nineteen long centuries.

The Capernaum Synagogue Finding an ancient synagogue in the Holy Land would seem to be unimportant – trival even.  We know from Scripture as well as from ancient records that Jews would congregate in a synagogue on the Sabbath.  There were multiple reasons for meeting in a synagogue, perhaps the… Read More »

Atheism and the Meaning of Life
Historical Reliability of the Gospels

Leave A Response to "The Three Doomed Cities" Cancel reply