Christ arrived right on time – not too soon or too late.  If Christ had come to Earth earlier or later, the Christian message probably could not have permeated the world as it did.  Many factors had to come into play to enable the message to spread out – not just any time would do.

We will show that Christ came at the best time for his message to take hold, spread throughout the world, produce converts of the most ruthless barbarians, and finally, change the lives of billions for the better.

Right on Time for a Message to Spread

Many have wondered why Christ did not appear earlier to the Jews, maybe at the time of King David.  The Israelite Empire was consolidated, fairly peaceful, and powerful, and it might be a good time for Christ to come.  Alternatively, Christ could come during the modern period, when communication technology could transmit his message instantly through the Internet. 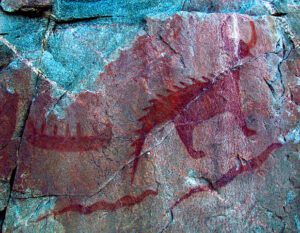 The first form of writing occurred about 3500 BC in pictographs or proto-cuneiform.  Writing would consist of symbols of an object, such as a cow or a person.  A primitive story might consist of a person with an arrow killing a cow.

Symbolic writing has significant limitations as only a very primitive and generally not very interesting story could be told. 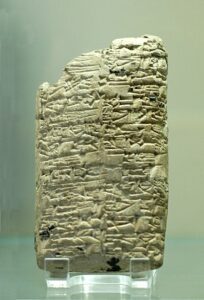 Transporting pictographs was also problematic as paper had not yet been invented.  The symbols might be etched into the side of a cave or on clay tablets that could be transported and shown to others.  Cuneiform was typically written onto clay tablets with a reed when wet.  The tablets were then dried and would serve as a permanent record of the message written on the tablet (as long as the clay was never broken!).  Collections of these tablets could then be organized into a primitive library of information as needed.

While this form of writing served well to communicate simple concepts, it would have been inadequate for more complex concepts such as the teaching of Christ.  The fragile clay tablets would be susceptible to breakage, with Christ’s message lost forever (unless there were many copies!).  A more complete exposition on cuneiform writing can be found here.

Writers improved the cuneiform style of writing called “amplified” cuneiform in about 3000 BC.  More complex concepts could be communicated by adding phonograms (symbols for vowels and syllables).  This allowed more complex words to be developed, making cuneiform easier to read.

Cuneiform writing has the disadvantage of being written on fragile clay tablets subject to breakage.  They are difficult to make, require significant care in hardening the tablets through heat, and are rather bulky, especially when produced in the tens of thousands.  Organizing such a library becomes a logistical nightmare!

This all changed with the development of papyrus. 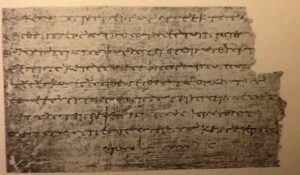 The ancient Egyptians first developed papyrus paper.  They were able to use a reed that grows around the Nile River.  The Egyptians found that by pressing strips of papyrus at right angles to each other, they could produce long-lasting paper.  The papyrus reed contains natural bonding material that helps to make this possible.

Papyrus became very popular in the ancient world and was adopted by the ancient Greeks and Romans.  The significant advantage of papyrus is that it can be transported safely without worrying about breakage.

Papyrus was an excellent writing material for the Egyptians as the very dry climate preserved the material well.  However, mold would attack papyrus in wetter climates, and library rolls were stored in wooden boxes and chests made in the form of statues.

Papyrus was made in several qualities and prices.  Pliny the Elder and Isidore of Seville describe multiple grades of quality based on how fine, firm, white, and smooth the writing surface was.  Materials considered unworthy of writing were used for packing and wrapping.

The Alphabet Developed Right on Time

Other alphabets that borrowed the Phoenician alphabet include Arabic, Cyrillic (Russian), Greek, and Latin.

The Phoenician alphabet became the basis for more rich and robust modern alphabets that allow writers to communicate complex ideas and to record these ideas permanently.

The Greeks added vowels to make their twenty-seven-letter version of the alphabet in about 800 BC making word meaning even clearer.  The Etruscans adapted the Greek alphabet by changing the shape of several letters but otherwise changed little.  The Romans then conquered the Etruscans and embraced their alphabet.  By 100 BC, the Roman alphabet became the standardized alphabet of the Empire.

Every region the Romans conquered assumed its alphabet.  This spread the Roman form of writing throughout the known world.  But Latin never became as popular as Greek.  A common form of Greek known as “Koine Greek” dominated trade throughout the Empire.

Even the Jews learned Greek to speak Greek to their Gentile (non-Jews) neighbors.  It was the language of commerce spoken by most people throughout the Roman Empire; if you wanted to do business, you had to know Greek.

Greek universality was one reason most of the New Testament was originally written in Greek (except Matthew, which was written in Hebrew).

Only at this point in history, using the Etruscan-modified Greek alphabet, Koine Greek, could the message of Christ be spread throughout the known world.

This all happened right on time for the arrival of Christ and his message.  Had Christ arrived earlier than about 100 BC, the dissemination of the Gospel would have been much more difficult.

Christ spent his entire life in what is now called Israel.  He did not travel to other countries, and his disciples did not travel elsewhere until after his death.

The good news of the gospel needed to spread throughout the known world.  A common language would facilitate this evangelization.  Greek became this common language as it was the language of trade, and trade was spread from modern England to Syria.  A huge swath of the ancient world became exposed to the message of Christ, and some disciples would take the message even to other areas (such as Thomas to modern India).

The written Greek language had become standardized, and papyrus was invented, which was excellent for carrying the written message.

This all needed to happen to maximize the spread of Christ’s message worldwide.

But a lot of other advances in communication ability also developed simultaneously.  This will explored more fully in the next blog of this series.

One of the most common colloquialisms is about hardening your heart.  According to Merriam-Webster, it means to stop having kind or friendly feelings for someone or caring about something. It would probably surprise most people that the expression derived from ancient Egypt and is important in the Biblical narrative. Hardening… Read More »

Leave A Response to "Right On Time" Cancel reply