The Upper Room is one of the most venerated places in Jerusalem.  It is a site featured in the New Testament Gospels as the place where Jesus had his Last Supper with his disciples, and where he later appeared to them after the Resurrection.  It is also the place where the first believers gathered together to await the arrival of the Holy Spirit.

The  Biblical Archaeology Society has an excellent article showing possible ancient renderings of the Upper Room in various churches throughout the ancient world.  This article has these renderings in order for the readers to make their own decisions. 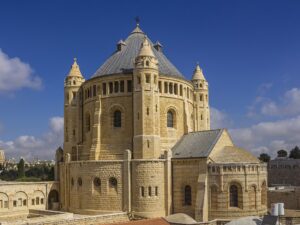 The building currently assumed to house the Upper Room is on the southern end of Mount Zion in Jerusalem near the Church of the Dormition and the traditional house of Caiaphas.

Historians have debated for many decades concerning whether this traditional location of the Upper Room is actually where these historical events occurred.  Some have suggested that the current building is actually the surviving portion of an ancient Byzantine church built in that location in the fourth century.  This church was known as the Hagia Sion (Holy Zion) which for years has featured ancient Christian relics and shrines.

Other historians believe that the original Upper Room existed long before the Hagia Sion and was located just beside it.  There is little in the way of original archaeological evidence to determine which of these two theories is correct.

What may help in this determination are Christian reproductions of ancient Jerusalem which reveal a distinct structure beside the Hagia Sion church.  There is good reason to believe this ancient structure represents the actual Upper Room. 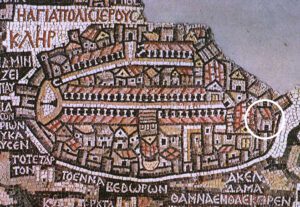 Madaba Map: This map of Jerusalem comes from the Church of St. George in Madaba, Jordan dating to the sixth century. The Upper Room is circled. Photo – Public Domain.

Probably the most important of these ancient artistic representations of ancient Jerusalem is located in the neighboring country of modern-day Jordan.  It was a mosaic map of Jerusalem done about 560 AD showing two sacred structures separated from other buildings by their red roofs.

The larger building in this mosaic is universally identified as the modern-day Hagia Sion church, while the smaller structure with a sloping red roof might represent the Upper Room.  These two buildings are located exactly where the Hagia Sion church is found today. 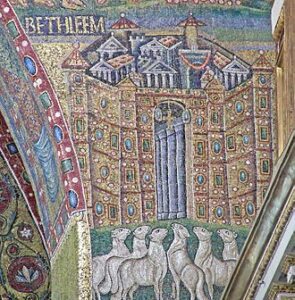 Another mosaic was completed in Rome at about the same time as the above-noted mosaic found in Jordan.  It is similar showing red roofs representing the fourth-century Church of the Holy Sepulcher in two parts.  Nearby stands the Hagia Sion church and another structure next to it with a sloped red room.

Again, these two structures stand at the same location as the current Hagia Sion church found today.  The similarity between these two mosaics is rather striking suggesting they represent an actual city with real buildings and not just some idealized representations.

The Rossano Gospels are an illuminated manuscript from Calabria, Italy thought to be from the sixth century.

In this manuscript, Christ is shown just about to enter Jerusalem riding a donkey among an adoring crowd.  There is a striking building with a red, slanting room similar to the one found in the mosaics suggesting another drawing of the Upper Room.

A wooden carving from the sixth century found in Egypt originated in the Hanging Church of Cairo.  The carving illustrates Christ on a donkey.  There is a prominent sloping roof building located just to the left of Christ bearing a striking resemblance to the structure found in the mosaics and illuminated gospels.  Some scholars have identified the sloping structure as the Upper Room.

This structure has two stories with a door on the bottom floor and a window on the second.  A curved arch is located behind the building possibly representing the Zion Gate.

A fresco done by Pietro Lorenzetti in the 14th century shows a two-storied structure within the city walls which is possibly identified as the Upper Room.  Birds (possibly doves) are noted above the gate and in front of the building itself, possibly representing where the Holy Spirit lit upon early believers.

Behind the Upper Room is an octagonal structure likely representing the Dome of the Rock, along with a city gate.  The Mamluk Muslims had taken over many Christian buildings at this time.

A sculpture from a fourth century sarcophagus was once present in the Lateran Christian Museum in Rome.

The sarcophagus shows Christ either healing a woman with an issue of blood, or comforting Mary Magdalene after his resurrection.  There is a building behind this scene which shows a sloping room reminiscent of other structures noted above, possibly representing the Upper Room.

These extensive drawings on an ancient sarcophagus likely belonged to a rich, influential person as most did not have these extensive inscriptions.

These artistic representations of a building with a sloping roof give evidence that the Upper Room once stood next to the Byzantine church of the Hagia Sion.

We will never be totally certain as to the identity of these structures found on ancient mosaics and drawings, they all appear to be similar in structure and certainly important to the artist.

The history of the Upper Room shows it is of significant importance to Christians today – and apparently to Christians over the past two thousand years.  Its identity can never be established with certainty, but the sloping red roof structure centrally displayed in ancient drawings certainly suggests the importance of this structure.

Historicity of the Resurrection
The Ancient Canaanites

Leave A Response to "The Upper Room" Cancel reply