Amino acids link together in a chain called a “polypeptide” in a certain order. All amino acids in life proteins are made of the left-handed variety of proteins.

The way in which only left-handed amino acids were included in life proteins is also under intense investigation. All amino acids except for the most simple variety, glycine, come in two basic varieties – a right-handed and a left-handed form. They act identically in chemical reactions but are different in how they are structured.

The “handedness” of molecules is called chirality and is discussed extensively elsewhere. There is no good explanation available as to how only the left-handed variety of amino acids are used in life molecules.

A typical protein is made of many hundreds of amino acids in a string. The string may loop back upon itself forming complicated foldings as the amino acids interact with each other.

Proteins have two main jobs in the cell. There are structural proteins which form a scaffolding within the cell, and proteins that are involved in chemical reactions.

So far, we know of 32,391 proteins used in humans. There are 480 amino acids in the average protein; some are much longer. The largest known protein in the human body is connectin that is about 33,000 amino acids long. It is important in muscle function and structure.

Origin of Functional Proteins by Chance

The natural production of functional proteins by chance is one of the presumption of origin of life biologists. Either there was intelligent design in the production of early earth polymers like proteins or by chance.

Some scientists assert polymers of amino acids were produced by heating amino acid solutions which then dried. This might occur in a so-called prebiotic soup.

Laboratory experiments attempting to produce functional proteins have failed so far. For example, amino acids can form chains of up to ten-amino acids long The problem is that these chains tend to be broken down as quickly as they are made.

Another attempt is to build amino acid chains using various resins. The amino acids are then successfully added upon a resin surface under precisely controlled conditions. Of course, whether this is at all like the early earth environment is very questionable.

Certainly, there was no scientist there directing the experiments and keeping the environment stable.

Also, none of the proteins manufactured have any functional capacity. They do not fold, they have no active spaces, do not accelerate chemical reactions. In short, these chance manufactured proteins have no biological significance.

But, what is the chance of producing a functional protein in this manner?

Chemists know that amino acids react with each other in a certain way. There is a 1.25% chance of getting the right amino acid in any place in the length of an arbitrary protein.

So what is the chance of making a given protein by chance?

Making a Functional Protein by Chance

The chance of getting the correct chemical bond is also about 50%. There are two ways amino acids can form chains; only one of these ways is functionally correct.

Then, there is a 5% chance of choosing the correct t amino acid since there are twenty amino acids used in life. This assumes that none of the non-life amino acids are around. It also assumes there will be no competing reactions with other chemicals around (which are readily available).

In the words of chemist Walter Bradley,

If we assume that all carbon on earth exists in the form of amino acids and that the amino acids are allowed to chemically react at the maximum possible rate of 10^12 reactions per second for one billion years (the greatest possible time between the cooling of the earth and the appearance of life), we must still conclude that it is incredible improbable (1-^-65) that even one functional protein could be made.

But there is one major problem – designing the protein needed.

Researchers still have only an elementary understanding as to how amino acid sequences contribute to a protein’s function. This makes the production of functional proteins mostly a trial and error situation.

Therefore, a large number and variety of proteins are produced hoping that one might help with a needed function. An analogous situation is thought to have happened with the initial origin of functional proteins.

Perhaps the prebiotic soup contained vast quantities of various proteins that could be tapped for a particular function.

Researchers show this is an impossible dream. If there were a library of all possible combinations of a random sequence for a 100 amino acid protein, there would be 10^130 potential sequences. This number of amino acid random sequences would produce a volume of 10^54 earths.

This suggests it would be impossible to structure a given protein by chance. Remembering there are thousands of functional proteins in the human body, the difficulty becomes obvious.

Origin of Functional Proteins by Chance 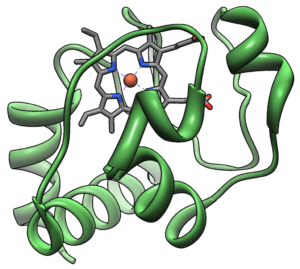 But wait! The natural biologist would argue this is not a fair scenario. It assumes that every amino acid is required for a functional protein to work – and this is not true.

Biophysicist Hubert Yockey has attempted to answer this question by looking at a common enzyme. This is cytochrome c that has about 110 amino acids and is associated with electron transport.

It is a very common protein found throughout life. There is a small amount of variability in the amino acid structure that is likely not functionally important. Using this information, Yockey was able to calculate the probability of random events to produce cytochrome c. This probability was about one chance in 10-75.

Yockey based his calculation using the largest primordial soup possible containing 10^44 amino acids. He chose cytochrome c as it is a short protein containing only 110 amino acids so it would be easier to make. It would take more time than the age of the universe to make one protein.

The origin of functional proteins used in life has to be either intelligent design or chance.

Yockey found that the chances of producing one small functional protein as being vanishingly small.

Perhaps other proteins could have been used rather than cytochrome c but we do not know that. Also, those are the chances of producing one molecule. How that one molecule gets together with others to make life is still an open question.

The more we understand about biochemistry and get into the details about the complexity of life, the more impossible it seems.

And this is only with proteins.

Chemical pathways are the way a cell changes one chemical compound to another. Many times, these chemical pathways produce intermediate chemicals on the way to producing the final product. All life needs to take in nutrients from the environment in order to continue living. This might be everything from simple… Read More »

The prebiotic soup is the mixture of chemicals in the ancient Earth which produced the first life. It is commonly known throughout our culture, so much so that it was a theme of a Star Trek episode. In this episode, Captain Picard is taken back to ancient Earth to witness… Read More »

Leave A Response to "Origin of Functional Proteins" Cancel reply