The Biblical ancient city of Ziklag has been discovered in Israel.  The Times of Israel reports that the site was accidentally found by archaeologist Saar Ganor surveying the Elah Valley in 2007.  This valley is most popular as the site of the confrontation between King David and Golia. The boy shepherd defeated the mighty Philistine warrior with a slingshot stone knocking him unconscious. 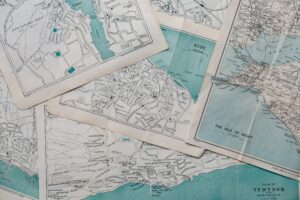 David would become king of Israel only after spending thirteen years on the run from King Saul.  Saul was jealous of David’s abilities and likely viewed him as a rival to his throne.  Saul relentlessly hunted David down but was never able to catch him.  Interestingly, Scripture tells that David had an opportunity to kill King Saul but recognized Saul as the anointed King of Israel and would not take advantage of his opportunity.

For a time, David sought refuge in Ziglag, a small Philistine town on the edge of Judaea.  It was in an enemy country that David successfully escaped the murderous intent of King Saul.

The Scriptures say in Samuel 1 that when David heard that King Saul wanted him dead, he and his group of followers fled to the Philistine kingdom of Gath with its king named Achish.  He asked the king to assign a place where he could hide and requested “a place in one of the country towns.”  The Bible notes,

So on that day, Achish gave him Ziklag, and it belonged to the kings of Judah ever since.

The settlement included David, his 600 “mighty” men, and their families living among foreigners.  It effectively served as a place where he could hide among other people while waiting out the rest of King Saul’s reign.  The Prophet Samuel had appointed David when he was much younger, but David had to wait seventeen years until he could actually assume the throne.  (Interestingly, this time sequence parallels that of Joseph, who was sold into slavery by his brothers at seventeen years of age and finally became a great leader of Egypt when he was thirty).

It seems that some of the Philistine leaders did not believe David could be trusted and were very suspicious David might turn against them in battle and fight with his countrymen. So they insisted that Achish send David back to Ziklag rather than take the risk of a betrayal.

The Amalekites and the Ancient City of Ziklag

While traveling back to Ziklag, David and his men could see smoke rising in the distance and knew that something was seriously wrong.  When they finally arrived back in Ziklag, they found the city destroyed with everything burned, and all the women and children were taken away.  Someone had taken advantage of their absence and had successfully ransacked their city.  They took everything they could carry, leaving nothing of value behind.  They also had apparently taken away their families as well.

David and his men were distraught that an invader had taken their families and the city destroyed.  David’s life was in danger as his men held him responsible for their loss.  It looked like David’s aspirations for a kingdom were over before it even started.  An unknown enemy had defeated him and his men.

David and his men pursued the raiders, who were eventually identified as Amalekites.  David finally caught up with them while they were celebrating their great victory over the Philistines.  Most of these men were drunk and easily defeated.  The Scripture says that only a small fraction of some of the younger soldiers was able to escape.  David and his men rescued their families and brought them back to Ziklag with a great celebration.  They then took property from the defeated Amalekites and distributed it among all of David’s soldiers.

David stayed in Ziklag for two days until messengers arrived to inform him that The Philistines had killed King Saul in battle with the Philistines.  David became distraught that his childhood close friend Jonathan, one of the sons of Saul, had also been killed.  Adding insult to injury, the Philistines desecrated the bodies of Saul and Jonathan. After a mourning period, David left Ziklag for the last time and headed to Hebron, where he would be made King over Israel. 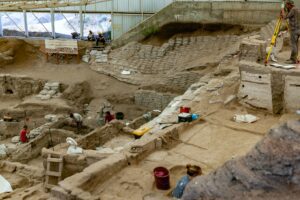 Archaeologists also found various ceramic items from the time of David.  Some of these artifacts were discovered intact, while others were broken but could be restored.  The Philistine-era ceramics have spiral and bird decorations that are more consistent with Philistine origins than Israelite.  Some of the artifacts could be carbon-14 dated and were found to be from the time of David.

Ziklag was an unfortified town without a city wall spread out over the hill.  There were substantial buildings in the center of the town and smaller buildings at the periphery.

Archaeology continues to affirm much of the Biblical historical narrative. For example, scripture indicates the city of Ziklag was destroyed by fire, and artifacts uncovered at the ancient site support that narrative.

Artifacts from the city have been dated to the time of David, and its location is consistent with the Biblical narrative.

Many Bible detractors suggest David was merely a hilltop chieftain rather than a leader of a large, powerful nation.

Not everybody is convinced that their finding is actually the city of Ziklag, but it is certainly the best supported by the data.

Ziklag was a great testing time for David.  He had to undergo great loss and a test of his leadership abilities to hold his soldiers together at a time of great personal loss.  The story could have ended with David giving up or being stoned by his distraught fighting men.  But David instead established the United Kingdom and led Israel into its golden period of expansion.

David was known as the man “after God’s own heart” and would become the ancestor of Christ.  The Gospel of Matthew gives the genealogy of both Joseph and Mary and shows them to both be descendants of David. Moreover, God had promised David that his throne would last forever through the Kingdom of the Messiah.  All of this started in the small hamlet of Ziklag when David was able to exercise his leadership abilities, defeat a powerful adversary, and become King over the country of Israel, to which he had been anointed by Samuel seventeen years previously.