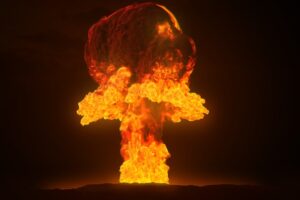 The existence of great suffering and evil on earth has been difficult for many people to understand in a universe made by a loving God.

Many cosmologists including Einstein, Hoyle, and Davies have questioned the existence of God due to the great suffering that is present everywhere on earth.

Natural calamities such as  earthquakes, fires, floods, and climate change can cause one form of suffering that is independent of the activities of mankind or animals.

Man-made disasters such as war, pollution or destruction of natural habitats can produce another form of suffering.  Animals can produce suffering of other creatures as they kill each other trying to survive.

Many feel these natural and artificial disasters only make sense if the universe is controlled by impersonal forces with their only benefit to making animals stronger through survival of the fittest.

World-class scientists have pondered these issues with many coming to the conclusion that any God – if he exists at all – must be impersonal and uncaring.  The whole concept of evil and suffering has occupied the attention of the greatest theologians throughout history, attempting to understand how a loving God could allow such great suffering as exists on this planet.

Biblical Answers to Suffering and Evil 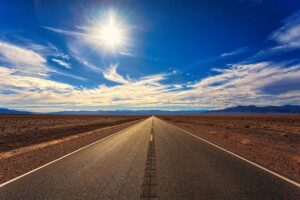 Perspective. Image by My pictures are CC0. When doing composings: from Pixabay

The problem of evil is probably the most difficult challenge to Christianity today.  God is presented as being synonymous with love; yet, this God allows such great suffering.  Picture the countless millions who suffered through the World Wars of the last century for example – how could God permit that?

Part of the problem is with perspective.  Just as with the perspective challenge in understanding the days of Creation,  a correct perspective might provide insight into the problem.

God’s ultimate plan is to perfect those who choose to be perfected – who choose to believe in God.   God seems to be much more interested in the salvation of people rather than in their happiness or comfort.  Those who choose God will enjoy an eternity of great happiness, purpose, and joy which will far outweigh any suffering we might have had on earth.

Sometimes it is possible to better understand a problem by considering extremes of the problem.  We are all too familiar with taxation – the process by which the government extracts money from its citizens by force – if you do not pay your taxes, you will likely go to jail.  In order to avoid jail, most people and businesses will pay their taxes.

The government is usually interested in getting the most money possible from its citizens without having them revolt.  The question for any government is what is the best tax rate to get the most money from its people?  Taxation rates can be anywhere from zero percent to one-hundred percent of income – the two extremes.  If the government taxes at zero percent, obviously they will get no taxes from their people.  If they tax at one-hundred percent, people will just stop working and earn money so the government again will get no taxes from its people.

Therefore, the government realizing its boundaries will try to make taxation rates somewhere between these two extremes, and this tax rate is usually tolerated by most people as just.

Similarly, if God made our life very easy giving us every comfort with no evil or illness until the day we die a peaceful death, few people would feel the need for God.  Alternatively, if the world was tremendously evil with everybody living a tortured, short life full of pain and suffering with no means of escape, again few people would choose God.  These are the two extremes between which God works to bring people to him.  In other words, pain and suffering are needed to bring us to the realization of our mortality, our limitations, and ultimately our need for God. 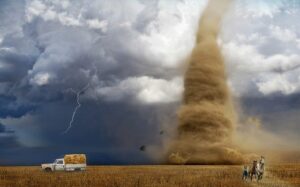 Christians understand that this life is roughly analogous to a school where we have the opportunity to learn about God and respond appropriately to him.  At the end of this course, we get a “final examination” with our judgment.

This life also ultimately prepares us for the eternity that lies ahead.  We make the choice of whether to be with God or not in this life – in eternity, God will honor that choice.  The purpose of our life is not to live for ourselves, but for others.  It is not – as a popular car bumper sticker says – to live like “He who has the most toys at death wins.”  Our physical possessions do not determine our station in life to God – rather, how we treat and take care of others, and how we respond to God’s love for us.

Finally, death reminds of us our own mortality – that we only have so much time to live on this earth and we need to make the most of each day.  It is a terrible thing to reach the end of life and realize it has been wasted on living for yourself, playing video games all day, or trying to gain endless possessions and security.

Living for ourselves provides no security; an accident, medical condition, or an endless array of possible tragedies can end any sense of security we might have.  Our only security exists in the palm of God’s hand.

God wants us to understand we have no real security in ourselves; life could end with the next heartbeat or the next pandemic to sweep the world.  Think of the many famous people who have wealth beyond measure and yet are unhappy.  Many of the most famous Hollywood actors with all appearance of outward success end their lives with suicide; their lives are hopelessly empty even though they appear to have it all.

Limitation of Evil.  Death also has the purpose of limiting evil.  History is full of evil rulers who end up killing millions of their subjects in vain attempts to achieve more glory for themselves.  Think of how much more death and suffering might be caused by Napoleon, Stalin, or Genghis Khan if they lived forever.  Death can limit the amount of evil in society by removing the evil rulers that lead their people into evil.

Evil has a way of burning itself out over time.  Think of Chairman Mao whose leadership led to the death of tens of millions of his own subjects, along with similar amounts of other cultures.  China could not move forward with modernization while ruled by Mao but after his death, other rulers led the country into the modern world while Christianity flourished within its borders.

The time we walk on this earth is limited.  Scripture compares our life to a whiff of smoke or the dew of the morning which vanishes quickly.  The time of our suffering is minuscule compared to eternity.

Put another way, if the time since the creation of the universe is scaled down to a year, the whole of mankind’s existence would be less than a minute, and each life but a fraction of a second. 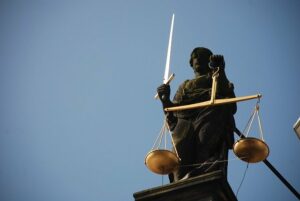 The presence of great evil presents another problem – that of justice.  There is no doubt that many who commit horrific crimes against humanity experience no significant justice for their crimes.  These crimes might include financial crimes where money or property is stolen from innocent people through legal or illegal means.  Scripture is very vocal against those who are in power and would take advantage of the innocent.

Other crimes are more physical including murder, assault, or emotional pain.  Often those guilty of such crimes are able to escape the consequences of their crimes – even through legal means.  The great injustice experienced by those injured by these crimes seems to go unpunished.

The Christian believes that ultimately justice will be administered to those who have committed these crimes and have escaped justice in this life will receive justice in the next.  The God of Love is also a God of Justice.  Scripture notes that those who refuse obedience to God choose eternity without him,

Summary of Suffering and Evil

This is only a very superficial evaluation of the problem of evil.  Great theologians have written volumes on this topic as it is one that has vexed many throughout time.

There is great suffering, most of it unfair to the sufferer.

The Sign of Jonah Christians are very familiar with the story of Jonah in the Old Testament.  The Reader’s Digest version is that Jonah was a Jewish prophet who was called to go to the capital city of the Assyrian empire – Nineveh.  The Assyrians were particularly troublesome of the… Read More »

The Ivory House
Order of Creation

Leave A Response to "Suffering and Evil" Cancel reply