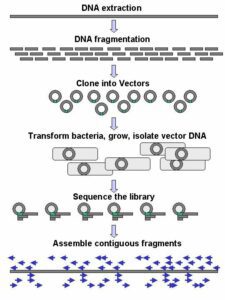 Multiple, fragmented sequences must be assembled together on the basis of their overlapping regions.  By Abizar at English Wikipedia, Public Domain, Link

Much of the non-protein-coding portions of DNA consists of repetitive DNA sequences.  This seemingly wasteful repetition of DNA sequences has been taken as support for evolution.  Certainly, a wise and intelligent designer would not have included nonsensical repetitive sequences of nucleic acids in the DNA molecule.

This support for evolution was proposed by Kenneth Miller when he noted that,

the human genome is littered with so many repeated copies of pointless DNA sequences that it cannot be attributed to anything that resembles [an] intelligent design.

Francis Collins, an evangelical Christian and believer in theistic evolution, acknowledge this DNA feature in 2006 arguing that some repetitive sequences may be functional and not just “junk”.  But he also noted that most have no function other than their own survival and therefore provide compelling support for Darwinian evolution.

several outlandish features of the human genome defy notions of ID by a caring cognitive agent, [rather they are] consistent with the notion of nonsentient contrivance by evolutionary forces.

the vast majority of human DNA exists not as functional gene regions of any sort but, instead, consists of various classes of repetitive DNA sequences.

But is this a fair appraisal of the factual situation or is it merely an expression of our ignorance.

Repetitive DNA makes up about half of the human genome.  A large portion of these repetitive areas involves hijacking RNA to make DNA sequences.

David Baltimore and Howard Temin independently discovered that RNA sequences can be transferred to DNA in a process termed “reverse transcription.”  The usual process of transcription is where a sequence of DNA is copied and changed into a copy of RNA.  This RNA subsequently may leave the nucleus of the cell and travel into the cytoplasm where it is translated into a protein.

These two scientists discovered that the process may at times work in reverse, a process called retrotransposition.  Retrotranscription is where the DNA is nicked by a special enzyme and a piece of RNA that has been “reverse transcribed” into DNA and inserted into the larger DNA molecule.

Some LINEs can be quite long, more than 5,000 nucleotides long, and some of these are functional, encoding enzymes that enable them to reinsert themselves into DNA.  The genes of mammals contain tens of thousands of these LINEs which themselves fall into several groups – the most common is designated L1.

SINEs tend to be much shorter, generally less than 500 nucleotides long, and depend on other genetic elements for their ability to insert themselves into the larger DNA molecule.  It seems like different mammals have different sets of SINEs, many of which are functional.

Most human DNA is transcribed into DNA suggesting there must be some functionality to the regions being copied.  Otherwise, the metabolic expense of copying unused genes would put the organism at a competitive disadvantage.

retrotransposons are central players in the structure, evolution, and function of plant genomes; [they] are certainly not junk.

The assertion that repetitive areas of DNA are functional was inferred from the evolutionary analysis.  Molecular biologists found a family of SINEs that were “highly conserved” in mammals.  This means they do not change among different mammals suggesting they must have some important function.  Otherwise, over time, mutations would pile up in the SINE sequences making them different among different mammalian species.

There is other evidence suggesting the functionality of LINEs and SINEs.  The actual function of some of these repetitive DNA regions has been uncovered, including regulation of the expression of other RNAs and the protein-coding regions of DNA.

Specific Functions of LINEs and SINEs

One of the most interesting functions of certain LINE elements is in the development of a female.  There are two X-chromosomes in a female, and one of these two X chromosomes must be deactivated.  French biologists found certain LINEs function to enable this inactivation to occur.  First, the LINE DNA produces rearrangement of the chromatin that inactivates some genes, and second, RNA that is transcribed from the LINEs coat and silence other portions of the X-chromosome.

This goes along with the notion that much of the DNA is not involved with the production of proteins, but rather in the regulation of gene expression.  Without the LINEs, the early female embryo might not be able to develop properly because the LINEs are required for proper deactivation of an X-chromosome.

An Italian biologist reviewed the literature in 2008 and concluded that LINE elements “regulate fundamental biological processes.”  Biologists working in India wrote in 2010 that repetitive non-protein-coding regions in DNA play “a regulatory role by contributing to the packaging of the genome during cellular differentiation.”  A group of Japanese biologists investigating cellular division showed that untranscribed repeated copies of DNA contribute to the cohesion of duplicated chromosomes before they separate. 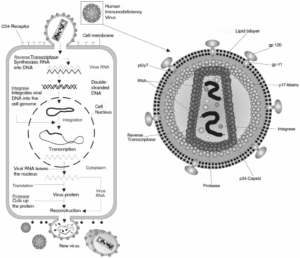 The Coronavirus we all have become familiar with in 2020 is an RNA virus.  It is responsible for the new disease which ravaged the world known as COVID.

Scientists found out about fifty years ago that the viral DNA grafted into a cell’s own DNA can often become a part of the permanent DNA of the cell.  If the insertion of viral DNA occurs in reproductive cells, the changed DNA can be passed to future generations.

The viral DNA that gets passed down from generation to generation is termed an “endogenous retrovirus (or ERV).”

Interestingly, these ERVs are flanked by hundreds or thousands of repeated DNA sequences called “long terminal repeats (or LTRs).”

Evolutionary biologists have claimed the ERVs represent a perfect example of molecular parasites that fit themselves into the DNA of their hosts but serve no useful function.  However, it turned out that this assumption would be wrong – at least in some cases.

French scientists discovered how LRTs of an ERB regulated the production of blood cells.  Over the next two decades, further examples of gene regulation by the LRTs thought to be “junk DNA” have now been found lending further support for the biological function of these repeats.

Francis Collins claimed in his book The Language of God that “ancient repetitive elements (AREs) [provide] compelling” evidence for Darwinian evolution, “with roughly 45 percent of the human genome made up of such flotsam and jetsam.”

The book was written in 2006 before much research has shown the regulatory importance of many of these areas.  We are now finding out that many of these previously thought to serve no function actually have an important cellular function.

This would be expected as our knowledge of the incredibly complex living cell becomes better understood.  It is further substantiation that increasing knowledge of cellular biology provides increasing support for the intelligent design narrative – not less while providing less support for a strictly evolutionary model.

The scientific support for Intelligent Design extends throughout many diverse fields, including astronomy, cosmology, developmental and molecular biology, microbiology, physics, among many others.  Scientific advances increase our understanding by providing further complexity.  New subatomic particles, new metabolic pathways, and biological control mechanisms, new fine-tuning of basic physical constants among many others, provide increasing support for an intelligent design.

Finding Junk DNA in your DNA Watson and Crick discovered the chemical structure of the DNA molecule.  These brilliant scientists were able to determine the structure consisted of two complementary strands wrapped around each other, with one strand going in one direction while the other strand went in the other… Read More »

Cellular Factories Cellular factories are present in every living cell, making the vast amounts of organic molecules required for life.  The cell can be likened to a factory where components required for cellular functions are continually made on-demand, and waste products are simultaneously packaged for disposal.  It is a very… Read More »