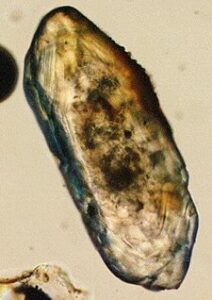 Zircon crystals are thought to represent some of the oldest surviving materials on earth.  The ancient earth was a very inhospitable places imaginable with soaring heat due to the constant bombardment of our planet by asteroids and comets.  The surface was molten rock, constantly heated by these collisions releasing huge amounts of heat which quickly melted any solidifying rock.

Zircon crystals are some of the toughest materials on the planet.  Scientists have located some of these crystals in ancient rock sprouting from the ground in the Jack Hills range located in Western Australia.    These rocks are thought to be 4.375 billion years old, plus or minus 6 million years.  The researchers note “We’ve proved that the chemical record inside these zircons is trustworthy.”  The results have been published in the respected scientific journal Nature Geoscience.

Scientists have retrieved more than 100,000 of these microscopic crystals from the Jack Hills formation.  The crystals contain tiny inclusion bodies including gas bubbles which provide a window into the conditions on earth at the time the crystals were formed.

One way the zircon crystals can be dated is through uranium radioactive decay.  Uranium decays to a lead isotope at a steady rate; counting the number of lead isotopes is how the crystals might be dated.

Zircon mineral incorporates uranium into its structure.  Uranium spontaneously degrades into lead due to its radioactivity.  There are two major isotopes of uranium, U-238 and U-235.  These two forms differ in the number of neutrons they contain within the nucleus.  This difference makes them different isotopes of the same element – uranium.

Some scientists have questioned the reliability of this method because the radioactivity produced as the uranium decays can damage the zircon crystals causing them to fracture and possibly allowing contamination from the outside environment.

Then Comes the Solution

The authors hoped to end the debate as to the reliability of the uranium-lead dating technique in zircon crystals by using the recently developed investigatory technique of atom probe tomography.  This technique is able to evaluate individual atoms of lead to determine whether they have a clustered distribution (arguing against contamination) or a diffuse distribution (suggesting possible contamination)

This technique is extremely tedious as numerous lead atoms must be individually counted and then placed without a three-dimensional distribution to determine the lead distribution.

The scientists were able to demonstrate that lead atoms stick close together within the zircon crystals meaning age distribution based upon the uranium-lead dating technique is most likely accurate.

Samuel Bowring, a geochemist at MIT who was not involved in the study, noted,

This careful piece of work should settle the debate bacause it shows that indeed there is some mobility of lead, which was hypothesized to result in dates that were too old, but the scale of mobility is nanometers.  Even the smallest volumes analyzed with the ion probe average out the heterogeneities.

The oldest ancient zircon crystals are now known to date back to just 165 million years after the formation of the earth.  These crystals survived trips down rivers, burial within the Earth’s crust, heating, tremendous pressures, and a ride to the surface on tectonic plates.

The Australian zircon crystals are known to range in age from 3 billion to nearly 4.4 billion years old.  This lends further confirmation to the ancient age of the planet but even more importantly, the crystals have gas bubbles encased within them.  These bubbles should provide further information as to the atmospheric makeup of ancient earth.  Atmospheres rich in oxidizing gases would lead to more life molecules, while atmospheres full of reducing gases would not.

Zircon Crystals are a Closed System

Recent studies of the zircon crystals show they are closed systems.  This means they do not interchange their content with the environment.  The materials that are encased within the crystal at the time of their formation remains enclosed within them during their entire lifetime.  More specifically, lead atoms formed from the radioactive decay of uranium stay within the crystal and do not leak out.  This finding gives further credence to the reliability of age measurements.

Good zircons are forever, and what this does is help us separate the wheat from the chaff in a way we could never do before.

The age of the Earth is an important measurement that helps determine the age of the universe.  The idea that billions of years were used to create present-day Earth with all its life-forms gives us a better appreciation of the care needed to make a proper home for mankind.

While God certainly could have made Earth and the universe within a second, he chose not to do so.  Instead, he chose to make the planet and all the life within it slowly over time.  One creation age led to another, with the products from the first age being required for life within the second age.  The gradual production of oxygen as a by-product of bacterial and plant life allowed for the development of oxygen hungry animals such as warm-blooded mammals.

We should all feel humbled by the eons of plant and animal life before us which were needed to produce earth-like conditions and the natural resources (such as oil) needed for people to arise on earth, and become technologically advanced.  This technology would one day confirm the fantastic complexity of life and life components making the need for a creator-designer even more apparent to those who will see.

The Sifting Project attempts to locate ancient artifacts in discarded debris from the Temple Mount from 1999.  At that time, access construction into an underground structure removed thousands of tons of sensitive debris. Historical Importance There has long been controversy about whether Scripture portrays an accurate representation of actual history. … Read More »