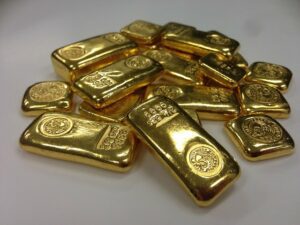 These include some of the most important metals for our industry and economy including gold, silver, and platinum. Many of these heavy metals are radioactive such as uranium and thorium.

Many of us have held silver coins (most of the coinage in the United States at this time does not contain any silver). We also may have gold rings or watches, while some have gold coins as well. These heavy metals are also used in industrial production. Gold, for example, is used many electronics, and silver is used as a conductor or in the production of camera film and X-ray plates.

But the familiarity with these elements belies their deep secret; how they are made in the natural world. The Big Bang produced only hydrogen and helium with trace amounts of lithium. Most of the other elements were made on stars as they go through their death throes.

Recently the source of the heaviest naturally occurring elements has become known – and it is an amazing story.

Gravity waves were first imagined by Henri Poincare in 1905 and predicted by Einstein in 1916. They are a natural outcome from his general theory of relativity.

The first indirect observation of gravity waves was made in 1974 with the discovery of a pulsar (a rotating neutron star) and another neutron star that is not rotating. This was called the Hulse-Taylor binary system after their discoverer. Their discovery of this system and understanding the consequences won them the Nobel Prize in Physics.

They were able to use a radio telescope to show there was a systematic variation in the arrival time of the pulses from the pulsar. Sometimes the pulses were a bit sooner, sometimes a bit later than expected. This variability occurred in a very repetitive and predictable manner with a period of 7.75 hours. 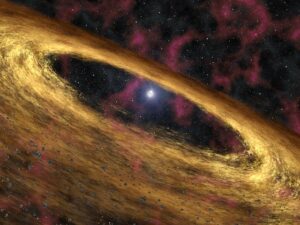 Pulsar – Image by skeeze from Pixabay

The pulses from the pulsar arrived three seconds earlier at some times relative to others suggesting the orbit of the pulsar is 3 light-seconds. This would approximate two-thirds the diameter of the Sun. Using Newtonian physics, it is possible then to calculate the combined masses of the two neutron stars calculated to be 2.8 times the Sun. Both the stars are thought to be nearly the same mass as the other at 1.4 times the solar mass.

The breakthrough came with noticing that the orbit was gradually shrinking. Physicists believe this is due to the emission of energy in the form of gravitational waves.

The two dead stars were locked in a deadly dance orbiting around each other and trapped by their immense gravity. They were relatively small stars – may about the size of the Earth. But they were extremely denser.

The gradual loss of orbital energy in the form of gravity waves are causing the stars to be gradually approaching each other. The orbit of these two neutron stars has decayed precisely in agreement with energy loss due to gravity waves.

It is estimated it will take about 300 million years for the stars to collapse into each other. 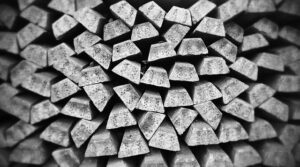 But then the real excitement begins.

We now know there were two neutron stars that collapsed into each other – about 130 million years ago. These stars are tremendously dense; a single teaspoon of a neutron star would weigh about a billion tons. The collapse of these two incredibly dense objects produced a cataclysmic collision producing a gamma-ray burst. Such a burst occurring without a few thousand light-years of the Earth might kill all life on the planet.

There was tremendous mass turned into energy causing a buckle in the space-time fabric of the Universe that spread out at the speed of light. In August 2017 the LIGO instruments observed changes consistent with a gravity wave – a revolutionary event in physics.

As two neutron stars (or two black holes) orbit around each other, the orbit gradually collapses toward each other. Once they are about 1890 kilometers apart things speed up. The orbital frequency will increase from one orbit per second to 918 orbits a second when they are 20 kilometers apart at a merger.

In August 2017, the LOGO observatory saw the inward spiral. Another similar event occurred in another galaxy which emitted a short gamma-ray burst followed by a bright light that is thought to be the r-process event.

The R-Process and Heavy Metals

This includes the production of elements near and dear to many people: gold, silver, and platinum.

The amount of gold produced during the neutron star collapse was quite impressive. It is estimated that it produced about 10 to 100 times the Earth’s mass in gold. 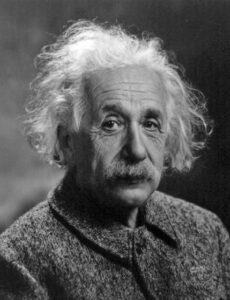 This was one of those foundational events in astrophysics and caused considerable excitement. It was so important because it confirmed what nuclear scientists had theorized for years. That is, that the production of the heavier elements was likely due to either collapse of supernovas or by the merger of neutron stars.

About 70 observatories dropped everything they were doing to emergently observe this element forge at various wavelengths They found the gravitational movement in space0time, followed by a visible glow of light about twelve hours lager. About a week later came the X-rays, and then the radio waves.

Some heavy, unstable elements are also produced on Earth during thermonuclear explosions when there is a release of considerable amounts of high energy neutrons. These elements led to the discovery of the elements einsteinium (element 99) and fermium (element 100) in nuclear weapon fallout.

The implications of the discovery of gravity waves are enormous for the Christian.as it is another confirmation of relativity.

Relativity predicts many things such as gravity waves. It also predicts the expansion of the universe and the beginning of time and space. This eerily sounds like the first few verses of Genesis.

Many cosmologists recognize this and are uncomfortable with the theological implications of relativity. This is because

Einstein’s theory of relativity has become one of the best and exhaustively studied aspects of physics. Its very nature provides multiple means of testing its predictions – and it has passed every test.

This includes the various aspects associated with gravity waves as presented above. The dynamics of a pulsar with a companion neutron star closely orbiting each other in a galaxy far away which matches the predictions of relativity.

There is now no “rational excuse” for questioning relativity as it has been so closely confirmed by observational science.

And since general relativity does indeed seem to predict physical phenomena then the universe began as the biblical creation account says.

The Biblical account of creation is the only creation account that includes the beginning of time – as well as of space. And that is precisely what is predicted by relativity.

Science gives Christianity another evangelistic tool as science once against affirms Scripture.

The Big Bang not only created at least the three dimensions we all inhabit, but it also resulted in the creation of time. The Big Bang One of the arguments against the Big Bang is that the laws of nature are unable to explain the amazing amount of life’s complexity… Read More »

One of the greatest discoveries in the last century was the mechanism of the creation of the universe in the big bang. Cosmologists have established the most likely model for this creation was at a point in time about 13.8 billion years ago. At this point in time – just… Read More »

Bulla of Azariah from Old Testament
Earth was Created