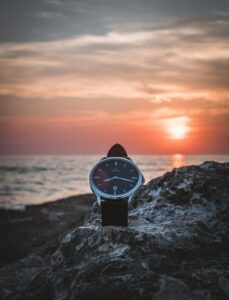 The illustration of a “divine watchmaker” has been a popular thought experiment to illustrate the involvement of an intelligent designer of life.

The evidence for God as the Designer of the world has been a popular argument for the existence of God.  The appearance of design is everywhere and its presence admitted by even the staunchest of atheists such as Richard Dawkins.

A classic historical example of the design argument is from the eighteenth-century British theologian William Paley and is called the “Watchmaker argument.” The argument is presented in his opus, Natural Theology published in 1802 and is presented here,

In crossing a heath, suppose I pitched my foot against a stone, and were asked how the stone came to be there; I might possibly answer, that, for anything I knew to the contrary it had lain there forever; nor would it, perhaps, be very easy to show the absurdity of this answer.  But suppose I had found a watch upon the ground, and it should be inquired how the watch happened to be in that place, I should hardly think of the answer which I had before given, that for anything I knew, the watch might have always been there. … The watch must have had a maker – that there must have existed, at some time, and at some place or other, an artificer or artificers, who formed it for the purpose which we find it actually to answer, who comprehended its construction, and designed its use. … Every indication of contrivance, every manifestation of design, which existed in the watch, exists in the works of nature; with the difference, on the side of nature, of being greater or more, and that in a degree which exceeds all computation.

Paley argued that nobody would argue that the watch came into existence on its own, or was the product of bits of dust, dirt, and rock being put together by natural processes.  Yet naturalists of his day and biologists of today would agree that life is vastly more complicated than the watch.

Rebuttals for a Divine Watchmaker

Even though the assertions of Paley seem well reasoned, the watchmaker analogy has been rejected by secular scholars.  The rejection primarily arises from three sources: Humes, Darwin, and Gould.  These will be individually examined to help understand the logic of their rebuttals.

David Hume.  Hume argued that the analogy between a watch and life is not close enough to argue for any similarity of design.  Hume believed that life only had the appearance of an engine and was only evidence for the appearance of design.  Hume further argued that the Universe was eternal in age and that given sufficient time the random shuffling of matter would eventually produce anything – such as life.

Charles Darwin.  Darwin argued that all life is in tremendous competition for survival that favors the best-adapted organism.  When natural variations occur among organisms, the best adapted will have a greater chance of survival.  Modern Darwinists now have the benefit of knowledge concerning DNA, and hypothesize that random mutations, lateral gene transfer, and natural selection of the best-adapted organism to their environment will gradually produce all the changes in the life-forms present on Earth.

Jacques Monod, a renowned biologist, noted in his book Chance and Necessity,

Change alone is at the source of every innovation, of all creation in the biosphere.  Pure chance, absolutely free but blind, [lies] at the very root of the stupendous edifice of evolution.

Richard Dawkins in his book The Blind Watchmaker makes the following observation,

Natural selection, the blind, unconscious, automatic process which Darwin discovered, and which we now know is the explanation for the existence and apparently purposeful form of all life, has no purpose in mind.  It has no mind and no mind’s eye.  It does not plan for the future.  It has no vision, no foresight, no sight at all. If it can be said to play the role of watchmaker in nature, it is the blind watchmaker.

Jay Gould.  Jay Gould is a modern evolutionist who makes another form of a reply to Paley by pointing out a number of what he considers “bad designs” in nature.  He also gives some credit to modern life by the opportunistic utilization of previously existing parts.  He notes that the panda’s thumb is a clumsy adaptation of a wrist bone, not the work of a creator.

Response to Gould, Darwin, and Hume

David Hume was writing in the latter part of the eighteenth century while Darwin was working in the nineteenth century.  They did not have the scientific knowledge we possess today.

Neither knew the time limitations posed upon them by the age of the universe and the earth; they both based some of their logic upon the concept of an eternal universe which would give enough time for anything to happen.  Both of these authors also wrote during a time when the fantastic complexity of life was not at all appreciated.

They failed to understand the difficulty with putting together even the simplest of organisms such as bacteria from shelf chemicals let along in a hostile environment.

Hume’s claim that there is no strict analogy between an engine and an organism has been proven incorrect.  For the past several decades, x-ray scanning microscopes have been developed which are so powerful they can map complex individual molecules down to their atoms.  To date, several hundred molecules acting like little engines have been discovered in various organisms.

Nanomotors (motors that are just several billionths of a meter in diameter) designed and built by human engineers, for example, are ten times less efficient than the equivalently sized motors biochemists find in biological molecules.

Problem with Origin of Life

Another significant problem not addressed by Hume, Darwin or Gould is the problem of the origin of life.  Darwinian evolution can only take place when the first life form is assembled.  So far, molecular biologists have not been able to manufacture a living organism from shelf chemicals, let alone demonstrate who this might occur in the hostile environment of nature.

The whole origin of life issue will be extensively discussed in later posts for it represents a serious challenge to the naturalist.  Without getting life started, there is no evolution.

Summary of the Divine Watchmaker

The origin of life poses a great puzzle for naturalists.  They have to propose life originated from non-life.  So far, life can not be made even in the most sophisticated molecular biology laboratory, let along in a scummy pond somewhat in the wild.

We all know the qualifies of things which are man-made; they often contain information that provides a purpose.  This might be in a writing on the side of a cave in France or finding a contrivance such as a watch while walking on the shore.

Coded information contained within the DNA of a cell poses the same problem – how did it come to be?  There is no natural explanation for a complicated coded mechanisms with self-correcting capabilities and the capacity for self-reproduction. Most recognize the hand of a divine watchmaker at work in the case of life; other explanations have fallen far short with no natural explanation in sight.

Leave A Response to "The Divine Watchmaker" Cancel reply