The ultimate speed in space is infinite – or so thought scientists for many years.  Until Einstein, physicists believed there was no limitation to the speed at which objects could travel in space.

It was also thought the stars never moved but remained in their same positions forever. They were all thought to be the same distance from earth.  This was proven to be false when the movement of a star (61 Cigni) was first demonstrated by Giuseppe Piazzi in 1804.  It’s distance from the earth was measured by Friedrich Bessel in 1838.  He found it to be 10.4 light-years away which is very close to the modern value of 11.4 light-years.

Ole Romer evaluated one of the moons of Jupiter as it was eclipsed by the much larger planet.  Romer knew how long it took the moon to orbit Jupiter and noticed a discrepancy in this value when the Earth was moving toward Jupiter and when it was moving away from Jupiter.  Using these calculations, Christiaan Huygens was able to calculate the speed of light to be 212,000 kilometers/second.

A century later and with better instrumentation, Jean Baptist Joseph Delambree reported the distance to be slightly more than 300,000 kilometers/second. The current value for the speed of light is 299,792,458 kilometers/second

James Maxwell And the Speed of Light 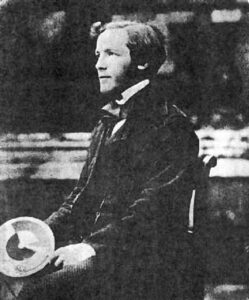 Ether was a purely imagined medium through which light and other electromagnetic waves traveled. It was not considered possible that light could move through empty space.

The famous Michelson-Morley experiments performed in 1887 failed to prove light travels through a medium They hypothesized that as the earth moved around the Sun, as some points during its travels it would be moving in the same direction as the ether while in other points in its orbit it would be moving perpendicular to the ether.

Michelson and Morley used an interferometer to measure any changes in the speed of light of two beams of life at right angles to each other. It was hypothesized that these two beams would experience the flow of ether differently causing the speed of light to be different along the two perpendicular pathways.

Results from this experiment showed there was no difference in the speed of light along two perpendicular pathways which refused the ether theory.

This has been called the most famous failed experiment in the history of science because it led to the discovery of relativity. 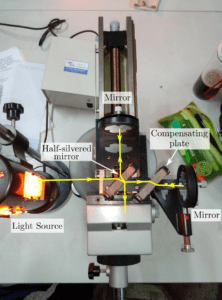 Results from the Michelson-Morley experiments indicate that the speed of light is constant no matter whether you are moving toward the light or away from it.

This finding was completely contrary to common sense and classical physics. It took the genius of Einstein to explain how this all works. Einstein reasoned by thought experiments that if it were possible to catch up with light then you would see a stationary electromagnetic wave which is an impossibility.

Einstein then surmised that the speed of light is a physical constant irrespective of where you are or how fast you are moving relative to the light.

Galileo was among the first to understand the implications of what we would now term “relativity.”: He surmised that the laws of physics are the same for every observer who is moving uniformly in a straight line. That observer would feel no movement even if he were moving quickly.

Put another way, Galileo used an example of a ship traveling on quiet water straight ahead without rocking. He noted any observer doing experiments in the darkness below deck would not be able to tell whether the ship was moving.

Speed of Light Does Not Vary

We now know this is not the case through experimental verification. In one of the truly amazing demonstrations from modern cosmology, we can now say the speed of light is invariant over speed and time. 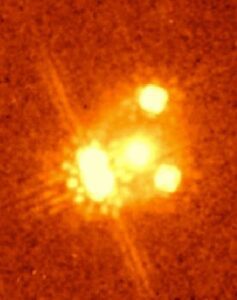 In order to understand how this is possible, we will need to go off on a tangent to understand the beginning of time. Physicists are designing theories to study the conditions before the Universe was 10-43 seconds old. At this time, the force of gravity within the universe becomes comparable to the strong nuclear force – very strong indeed.

The forces involved during this time are far greater than can be achieved in any experimental physics laboratory. However, there is a power indirect observational means to study this time frame.

Distant quasars and gamma-ray sources allow astronomers to evaluate quantum gravity. These very bright objects are extremely far away from the earth and need to travel through vast distances in space. As the light travels through space, it would be affected by small space-time fluctuations (foaminess) and become more blurred.

Some quantum gravity theories would cause extreme blurring of these distant objects and are clearly not rue. The relative lack of blurriness of space means the space-time fabric is very smooth. This; smoothness provides by far the strongest constraints on variations of the speed of life over vast periods of time and space.

These quasars are billions of light-years ago and hence billions of years old. The lack of blurriness of quasars means the speed of light must be invariant to a remarkable degree. It establishes the velocity of light in a vacuum cannot vary by more than a few parts in 100 million trillion trillion.

Other Implications of Lack of Blurriness

Secular cosmologists have attempted to avoid the theological implications of a beginning of time predicted by Big Bang cosmology. They speculate the laws of physics may break down during the first minute period of time after creation.  This might invalidate the need for a creation event.

However, the lack of observed image blurring of quasars in space means that if such a breakdown did occur the physical laws do not break down by much. 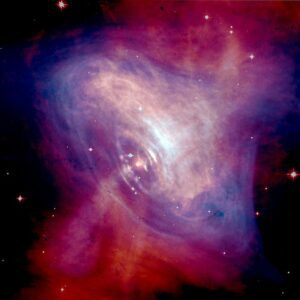 Astronomers are searching for a binary star consisting of a pulsar and a black hole. Pulsars are highly magnetized and very rapidly rotating neutron stars are the most accurate natural clocks in the Universe.

Timing these repetitive signals from a pulsar as it orbits near the black hole will allow them to determine the degree information can escape from a black hole.

Fluctuations in space-time geometry just outside the black hole will cause a variation of the pulsar’s pulses traveling near the black hole. These variations can cause the pulses to arrive on earth a few milliseconds to a few minutes late.

This will allow for the testing of different theories of quantum gravity.

Summary and Why This is Important

The importance of these observations is difficult to overstate.

Einstein realized relativity implied an absolute beginning of time – a time for the creation of everything.

This has obvious theological overtones.  Great effort has been expended by theoretical astrophysicists anxious to find a means around it.

For example, Stephen Hawking considered “imaginary time” as a possible way out of this conundrum. Other creation scenarios where the Big Bang happened from quantum fluctuations to alternate fields, forces, branes, and geometry speculations.

Some of these speculations require physics to change over time. Recently, there has been reported in the news that some physicists suggest the speed of light might change over time. However, the recent observation of the lack of blurriness of distant quasars suggests otherwise.

This also means the speed of light could not have changed since the quasars came into existence.

We also know from observation the theory of relativity is almost certainly correct. It makes predictions that agree with observation to one part in many trillions of trillions.

Christianity is the only major religion that predicts an absolute beginning of time which is almost certainly correct. This prediction is in agreement with observational facts.

As we learn more about the physical universe, we discover more verification of the Biblical narrative. This is true whether discussing cosmology, archaeology, history, biology, geology, or any relevant area of science.

Leave A Response to "Speed of Light" Cancel reply